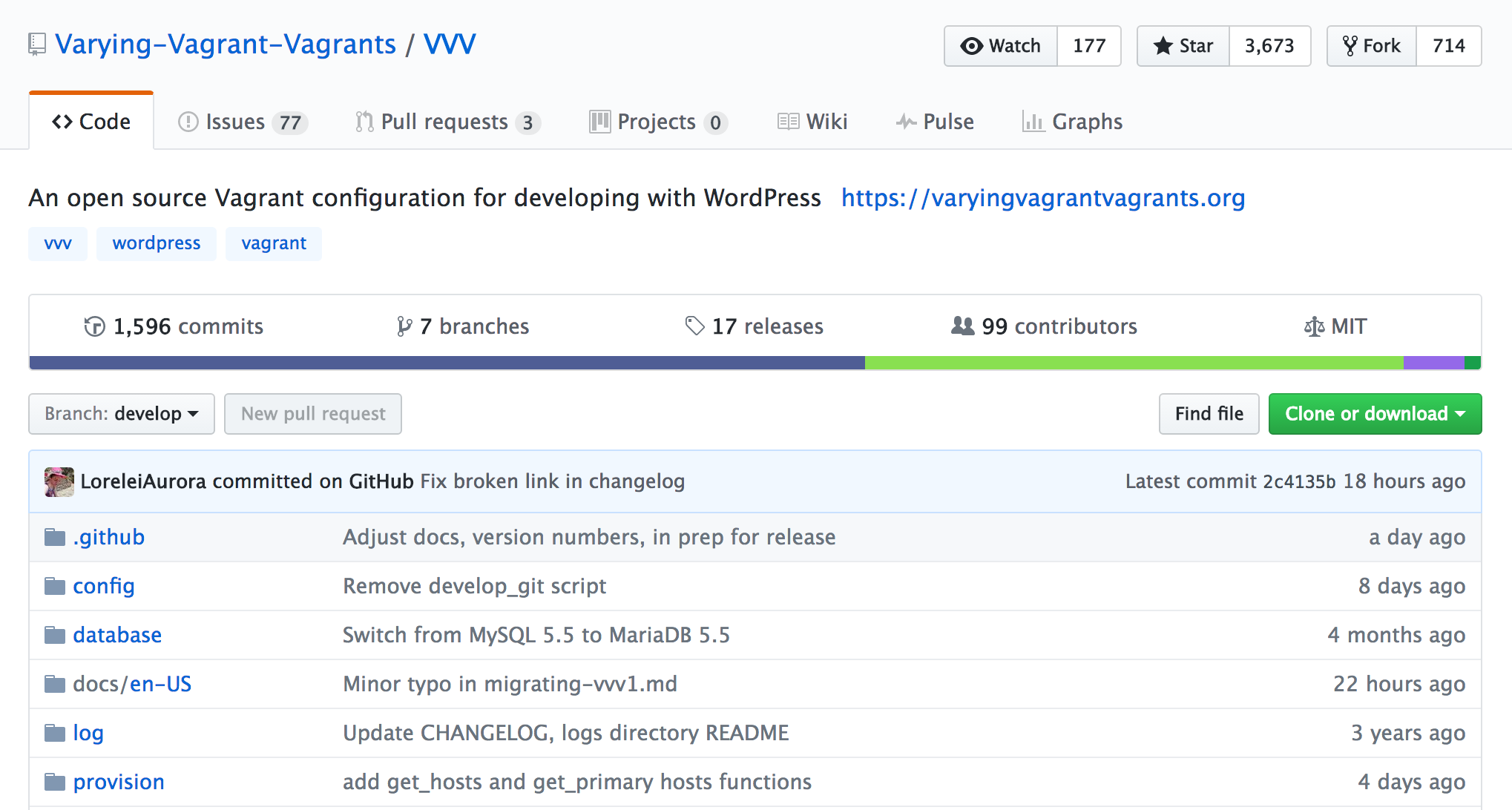 Varying Vagrant Vagrants 2.0.0 was released yesterday with support for a YAML configuration file. This is a major improvement that gives VVV users more flexibility in customizing their configurations. The new vvv-config.yml file includes the defaults and users can create a vvv-custom.yml file to change the default provisioning. Utilities have been broken out into their own repository, allowing users to specify PHP 5.6, 7.0, or 7.1 for new projects.

“In the past, it was often difficult as a maintainer to say no to feature requests because I knew that the customizations would either be really annoying for someone to implement on their own or would require a fork, possibly losing the benefit of future changes,” VVV Project Lead Jeremy Felt said. “At the same time, it was hard to say yes because not everyone needs the same features. Those two clash, and the easiest answer is to stall. The new changes provide a pretty straight forward way of providing these custom changes and make it easy to stay in sync upstream.”

Version 2.0.0 was also released with new documentation on the VVV website. Contributors are migrating docs from the wiki on GitHub to the new website and plan to make them translatable in the future.

Felt also recently documented VVV’s governance model and promoted Lorelei Aurora to the role of Lead Developer on the project. VVV has 108 contributors, by Felt’s count, and he estimates approximately 100 clones of the project per day based on GitHub’s analytics. For the past five years, Felt has cultivated VVV’s growing community of contributors by developing a friendly and welcoming culture within the project.

“Very early on I read something about OSS project maintenance that inspired me to always greet new commenters, issue creators, and developers in an effort to make them feel welcome from the beginning,” Felt said. “Removing even the smallest hurdles of contributing to open source goes a long way. Being friendly encourages people to stick around. Even in small projects like VVV, it can be overwhelming to figure out if you’re doing things right.”

Felt said he wished he would have written the governance document sooner, because it provides a roadmap for contributors. He found that having this information available to the community from the beginning may be just as important as having a license in place.

“It starts to answer the ‘what kind of impact can I have’ question when someone is getting started,” Felt said. “The current list of committers is a little misleading in that they are all people who were very active early in the project, but not as much now. Their input continues to be trusted, but commit access probably won’t be used very much. This isn’t a bad thing, as a project goes through cycles, but something to keep track of as a maintainer. Having a process is a healthy thing. I’m hoping it attracts even more contributors!”

What’s Next on the VVV Roadmap?

The next focus on the VVV roadmap is building out the rest of the documentation on varyingvagrantvagrants.org. Felt said he hopes it will become a great place for basic setup, detailed guides, and frequent troubleshooting tips. Translated docs is the next item that Felt said he hopes can be a huge benefit to the project and the community.

“There are a couple things that would be fun for flexibility,” Felt said. “A long-running pull request that introduces PHP Brew would be nice to finally tackle. Introducing MySQL Sandbox would be cool. And who knows? Everyone should stop by and leave a note with the feature they’d like to see most. I’m more comfortable saying ‘no’ now.”