The WordPress.org Recommended Hosting Page is Revamped, Features Flywheel for the First Time

DreamHost, Flywheel, and SiteGround have joined Bluehost on WordPress.org’s new recommended hosting page. In mid 2015, Matt Mullenweg, co-founder of the open source WordPress project, announced the page would be revamped. To have a chance at being listed webhosting companies needed to fill out a 40-question survey. 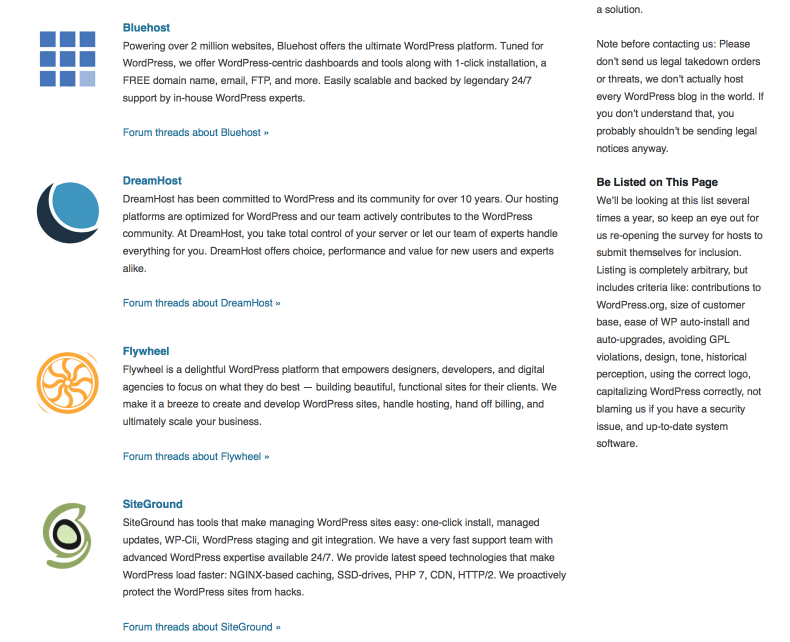 This is Flywheel’s first time on the page. Flywheel, launched in 2013, is a managed WordPress hosting company with an emphasis towards designers and agencies. I asked Dusty Davidson, co-Founder and CEO of Flywheel, what it means to be included on the page. “We’re obviously excited to be included, and think it really reflects on the work we’ve done to create a great experience for WordPress users,” he said.

The recommended webhosting page on WordPress.org is incredibly lucrative. Based on conversations I’ve had with employees of hosts listed, it can generate millions of dollars in revenue. I asked Davidson what impact this will have on his company, “I’m sure it will undoubtedly send a good deal of traffic, but honestly we’re just humbled and excited to be recognized,” he said.

A New Round of Controversy

Over the years, companies have come and gone from the recommended hosting page. However, Bluehost in particular has consistently appeared on the list, including the most recent iteration. Bluehost is owned by Endurance International Group who invested in Automattic in 2014. Because Mullenweg is the CEO of Automattic and controls who is listed on the page, it’s easy to see why it regularly generates controversy.

Kevin Ohashi of ReviewSignal.com, criticized the lack of transparency regarding the process for how hosts.

Who is responsible for this revamp? What were the selection criteria? How often will it be updated? Will existing companies be continuously re-evaluated?

These are important questions to ask and there are no publicly documented answers. In a follow up post, Ohashi investigated what criteria needs to be met for being listed on the page. The post contains a number of screenshots of his private conversation with James Huff, who has volunteered for the WordPress project for 12 years and has worked at Automattic for five years.

Huff was directly related to the project and influenced who was chosen thanks to his involvement on the WordPress Support Team. Within the conversation, he shares details of the process and mentions that no money exchanged hands. Early in the conversation, Ohashi tells Huff that he wants to learn and publish how the process works. However, Huff had no idea that everything he said would be made public.

“I was invited to what sounded like a friendly chat over direct message from a concerned community member, after he was referred to me by a friend,” Huff said. “At no point was it clarified or even implied that anything discussed would be made public.”

Unfortunately, the post comes across as a public interrogation of Huff. I asked Huff, who was shaken by the experience, how it has affected him moving forward as it relates to the WordPress project.

“I’d be lying if I said my feelings weren’t at least shaken by the experience, especially considering how polite he was to my friend and how hostile he was towards me apparently just because I work for Automattic, but this isn’t the first time that has happened to me and I don’t expect it to be the last,” he said.

“There’s an usually prevalent negative bias against Automatticians who contribute to WordPress.”

Mullenweg commented on the post where he not only sticks up for Huff, but answers some of the controversial questions raised by Ohashi. Mullenweg explains how the applicants were chosen, how the criteria is weighted, who makes the final decisions, and how much money is involved. Here is his comment in full.

‘I would like to see some transparency in the process’

As stated on the page, the listing is completely arbitrary. The process was: There was a survey, four applicants were chosen, and the page was updated. That might repeat later in the year, or the process might change.

‘how criteria are weighted’

There is no criteria or weighting. It ultimately is one person’s opinion. Information that is important is reflected in the questions asked in the survey, but that is not everything that is taken into account. (I have looked at this site in the past, for example.)

‘who is making the decisions’

I am. James helped in sorting through the many submissions that came in, doing additional research, and digging on finalists, but ultimately the decision was mine. You can and should blame me fully for any issues you have with it. I appreciate James’ help in this go-round, but he will not be involved at all with any future updates. (So, please leave him alone.)

‘how much money is involved’

There was no money involved. Obviously being listed on the page is hugely valuable and impacts the listed (or unlisted) businesses a great deal. This is why I take full responsibility for the listing, now and in the future — I have been fortunate to be extraordinarily successful and no financial or business consideration any of the applicants could offer matters to me. A host could offer $100,000,000 to be listed on the page for 1 day, and I would say no.

Should WordPress.org Have a Recommended Hosting Page?

Due to the investments EIG has made in Automattic, Mullenweg’s role at the company, and him making the final decisions, there will always be a potential conflict of interest despite taking full responsibility of the page and the processes associated with it.

Should WordPress.org have a recommended hosting page? What if the page was replaced with information people could use to make informed decisions on choosing a host? It would eliminate potential conflicts of interest and if there was a host Mullenweg felt strongly about, he could label it as a partner of the project. This would make it clear that any financial connection with the company is a business relationship.

Are you hosting with any of the companies listed on the recommended hosting page? If so, tell us about your experience in the comments.

70 responses to “The WordPress.org Recommended Hosting Page is Revamped, Features Flywheel for the First Time”