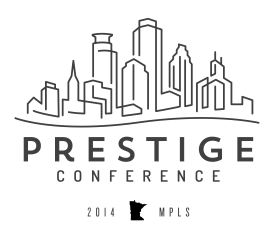 Prestige is a new conference that is taking place October 3-5, 2014 in downtown Minneapolis, Minnesota and is being organized by Josh Broton and Kiko Doran. Unlike WordCamps, Prestige only has one track and its devoted to the business of WordPress. Tickets are on sale and if you can’t make it to the event in person, consider the live stream option. You can save money by purchasing tickets during the early bird pricing period which ends August 15th or when tickets sell out.

The Friday night of the event features an opportunity to hangout with the speakers in a casual atmosphere and ask questions. Saturday will have one track focused on the business of WordPress. There is a one day theme workshop planned for Sunday. In six hours, you’ll learn what it takes to build a WordPress theme.

By not using the WordCamp name opens the door for experimentation and to try out new ideas. “Not because we disagree with how WordCamps are run, but because that demand is met by WordCamps. This gives the members of our community an opportunity to learn from the very best,” Broton said.

Although Prestige is similar to a WordCamp, the duo compares it to WPSessions in that, they are creating custom, tailor-made events. “I love the WPSessions model. I think Brian Richards is doing some awesome stuff that is custom tailored. That’s what we’re aiming for. Custom Tailored live events,” Doran told the Tavern.

One of the biggest differences between Prestige and WordCamps is that the organizers are paying for the speakers travel, accommodations, and food.  “I’ve spoken at 25 conferences in the last two years, including five WordCamps, so I know the burden that a lot of travel places on my work, my family, and my checkbook. We wanted to make sure the speakers were compensated for their travel and shown a great time, because they deserve it,” Broton told the Tavern.

In 2013, two organizers put together an independent conference in their city instead of doing another WordCamp. Andrea Middleton responded by publishing a post explaining there is room to experiment while still being called a WordCamp. It also has advice on how to transition between organizing a WordCamp and a self-organized WordPress event in the same city.

Before blazing a new trail, it’s worth checking with WordCamp Central to see if the event type you want to run could take place under the official banner — new event types are encouraged — so you can keep the benefits associated with being an official WordPress event.

Since WordCamps are local, annual, events held in medium to large cities, how do you propose organizers that want to focus on just one topic do so under the WordCamp umbrella? Are we going to end up with multiple WordCamps in the same year and in the same city but with different names?

Prestige is another example of a focused WordPress event. While WordCamps have been ongoing since 2006, there are only a few WordPress conferences that don’t use the WordCamp name. One example is PressNomics, which has quickly become one of the premiere, annual events, dedicated to the business of WordPress. WooThemes, the developers of WooCommerce are hosting WooConf, the first conference dedicated to WooCommerce later this year.

It’s encouraging to see more WordPress conferences devoted to specific topics versus having multiple tracks. This is already starting to happen within WordCamps like WordCamp Developer Edition: Vancouver which focused on developers. Even though most sessions are recorded at WordCamps, I find it refreshing to only have one track to attend, with awesome speakers, devoted to a specific topic.

Will you be attending the Prestige conference in person or will you opt for the livestream? Do you want to see more WordPress focused events like PressNomics and Prestige?

5 responses to “Prestige Business Conference For WordPress Set For Oct 3-5, 2014”