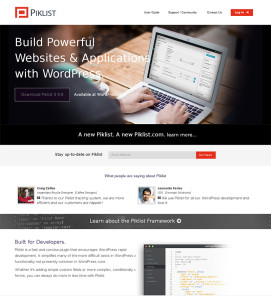 The Piklist rapid development framework for WordPress has rebranded and relaunched its website with the 0.9.0 release. The framework helps developers to quickly build things like fields for settings pages, widgets, custom post types, custom taxonomies and user profiles with minimal code.

The most recent 0.9.0 release includes the ability to easily create your own list tables, add post-to-post relationships, group users by taxonomy and much more. Piklist now automatically creates and supports multiple user roles, a feature that WordPress currently supports without a UI.

The project is maintained by two main contributors, Steve Bruner and Kevin Miller. I spoke to Bruner about Piklist rebranding. He said the new logo and site design are part of a new era and symbolize their mission for the future. “This year we plan on releasing other plugins that will be built on our framework,” he said. “Each Piklist plugin will connect, enhance and collaborate with other Piklist plugins.”

With Piklist’s continual improvement and plans to expand into plugins, it’s clear that this framework has found a solid user base. I asked Bruner if he thinks every WordPress developer needs a framework and why many of them are turning to Piklist. “We believe that Piklist is to WordPress what Rails is to Ruby,” he said. “Not every developer is going to use Piklist, but the ones who do are going to finish projects quicker and never look back. It simplifies many of the more difficult tasks in WordPress and adds functionality not presently common in WordPress core. Anything you can build with WordPress can be done in less time with Piklist. It’s that simple.”

Bruner and Miller have been supporting Piklist for the past two years without monetizing it in any way. The plan to release commercial plugins and support packages will help to fund the future of the framework. “We’ve helped businesses achieve higher levels of productivity by using Piklist,” Bruner said. “Their donations have funded Piklist until now. We hope that our reputation for quality and ease-of-use will convince users that they can’t do with out Piklist, and the (soon-to-be-released) Piklist family of plugins.”

In the meantime, the team at Piklist is locking down features for the upcoming 1.0 version. Their next major release will be plugins based on the framework and they have more products in the pipeline that Bruner believes “will be as revolutionary as Piklist itself.” A drag-and-drop field and form builder is in the works. The team also plans to develop some out-of-the-box applications, such as a contact manager and order management.

All of the documentation and screenshots have been updated for 0.9.0 and tutorials have been added for the new features. Piklist is available for download on WordPress.org. If you want to learn more about the framework, check out Building Powerful Websites and Web Applications with Piklist on WordPress.tv.

Have you tried Piklist? Do you use a development framework to build your themes and plugins?