Open Collective is a new service that aims to make it easy for individuals, groups, and organizations to raise money in a transparent way. Although many projects have communities ready to offer financial support, the paperwork, taxes, and accounting involved in collecting money under the proper legal entity can be a nearly insurmountable hurdle.

“So far, the Internet has been very good at helping people do things together,” Open Collective co-founder Xavier Damman said. “But once it involves money, there is no good solution. Creating a new legal entity is too much overhead, too early. What if we could create a virtual entity that can collect money as easily as creating a Facebook Group?”

Open Collective was created to eliminate the need for setting up a legal entity in order to raise funds. Groups can set up a collective and begin managing their funds immediately. The two key differentiators of the platform are the ability to raise money recurrently and the built-in transparency. Members of the collective must approve or reject an expense before the money can be used. Unpaid expenses and available funds can be viewed by the public. 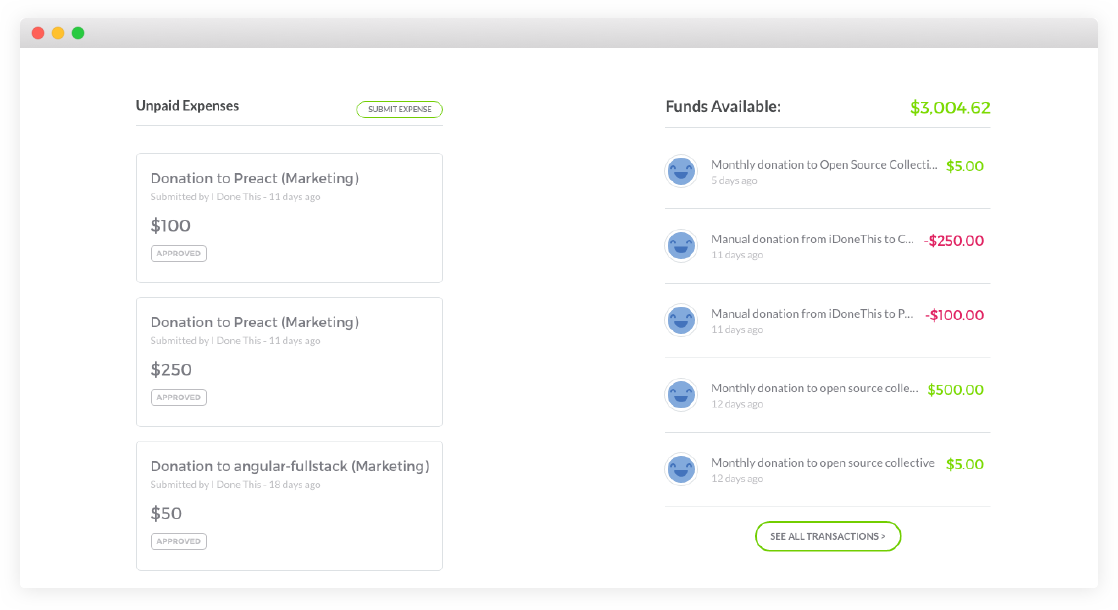 Open Collective currently has 228 active collectives and 196 of them are open source projects. Many open source maintainers are finding success raising funds on the platform. Webpack, a popular utility for bundling JavaScript files, is one of the most prominent successes, having funded its first full-time developer through the platform. The project’s collective now has an annual budget of $83,659.

I setup a collective for Split, my A/B testing framework on @opencollect, it's now got a yearly budget of $1,338 😮🎉 https://t.co/GCJwxBLwHv

If your company uses tachyons and would like to support its development we are on @opencollect!https://t.co/NM1zQQONwX

Preact, a fast alternative to React, has a collective on the platform to raise funds after maintainer Jason Miller started to experience burnout last year. In a recent interview with Open Collective, Miller said he enjoyed his day job and didn’t want to leave it to set up “Preact Inc.” One of the reasons he chose the platform was to leave room for future key maintainers to be able to access the community’s resources, instead of cannibalizing them all in his own personal fundraising efforts.

“If you’re fundraising for a community, there’s a clear implication that it’s for the betterment of the project as a whole,” Miller said. “By putting the project at center stage, as opposed to a person, there’s no need to explain that. In our case, I think it’s why people were so willing to contribute.”

The structure that Open Collective provides puts the focus on the community, instead of solely focusing on funding the talents and efforts of the most prominent maintainer. It also gives projects the opportunity to distribute funds to different types of contributors.

“My advice would be to put channels in place for all the different kinds of support an open source project needs, and offer people clear options: write features, raise issues, make a pull request, do code reviews, give money,” Miller said. “Don’t try to hide the fact that the project needs funding, and don’t skirt around that fact that it’s specifically about money, or it will come off as disingenuous. If there’s something users want from the project that money can enable, give them an avenue to make it happen.”

Open Collective has helped raise more than $200,000 for open source projects on the platform to date. Projects like MochaJS, Babel, GulpJS, Vapor, Qubes OS, and Hoodie have raised thousands of dollars for ongoing maintenance and support. Many of these projects are critical to the open source ecosystem and strapped for resources.

Although the platform is currently dominated by open source software projects, Open Collective was built to be capable of funding many different types of group efforts. Co-founder Xavier Damman described the platform’s goals in an interview with Dataconomy:

Our goal as Open Collective is to create this new light type of association for our generation who really love doing those side projects, creating those meetup groups, taking the initiative to create a conference located in your city, do open source projects together, create movements like occupy Wall Street, Black Lives Matter, all of that. There’s a whole bunch of things that our generation is doing but we don’t have any platform to enable those movements and these communities to collect money. So it’s all about finding a new way, fund those communities that can have a larger impact.

Open Collective’s co-founders share a strong commitment to open source and the majority of the platform’s code is MIT-licensed and available on GitHub.

“I’m a big fan of open source myself and we open source everything,” Damman said. “Open Collective is an open source platform because we believe in open source. We believe it’s the future of work. There’s no reason for having two different engineers in two different parts of the world solving the same problem. And also open source is the right business decision. I’m an engineer, as well as a developer, and we tend to make much better code if we know that other people can look at it.”

Open Collective takes 10% of funds raised by a collective in addition to credit card fees, which are estimated at 3% + $0.30/transaction). The platform’s fee structure is slightly higher when compared to other crowd-funding and fundraising platforms like Kickstarter and Indiegogo, which charge a 5% fee for successfully funded projects and 3-5% for credit card processing. However, these platforms are more goal-based and not necessarily designed for generating recurring funding. Open Collective’s fees include use of the platform for managing bookkeeping, taxes, and reimbursing expenses.

Open Collective for organizations is currently in private beta. It allows local chapters and other organizations to raise money and manage funds without having to open a separate bank account. Women Who Code is an organization that is using the platform this way and has an annual budget of $171,978 based on current recurring donations.

Money issues can be the source of bitter disputes in communities, especially when maintainers are short on time and neglect to document how donated funds are being used. Open Collective’s approach to financial transparency is sorely missing in most fundraising platforms, which don’t require their users to account for how the money has been spent after it is donated. Its built-in transparency and accountability mirrors the values of many open source projects and gives communities a healthy and convenient way to monitor the distribution of funds.

One response to “Open Collective is a New, Transparent Way to Fund Open Source Projects”