GitHub has launched a new Sponsors tool that allows open source developer to receive financial support. The program is rolling out slowly and currently has a waitlist for open source contributors or maintainers who want to join. 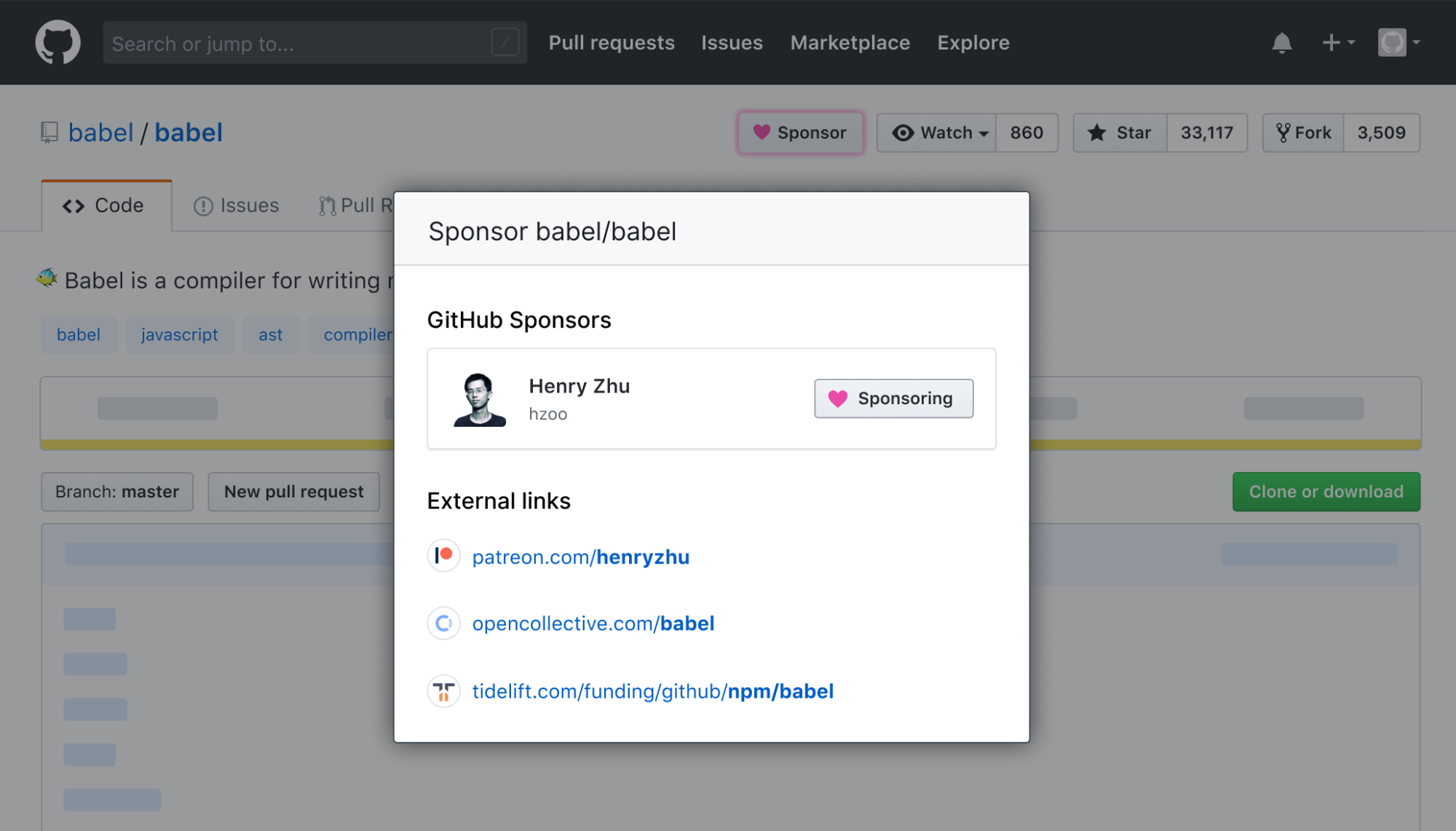 For the first year developers are in the program, GitHub will cover all the payment processing fees and has pledged to match all contributions up to $5,000.

Individual developers participating in the program can customize the funding options displayed when potential supporters click on the Sponsor button. They can add links to other popular funding services, such as Open Collective, Community Bridge, Tidelift, Ko-fi, and Patreon. Open source projects an also specify funding models for contributors by adding a .github/FUNDING.yml file to the project’s master branch.

Just enabled @github's awesome new Sponsor button for @parceljs with a link to our @opencollect! 😍 pic.twitter.com/DJnPAtahne

GitHub has an advantage over other competing funding services by having its Sponsorship model embbeded in the GitHub workflow where much of the work actually takes place. However, this also raises concerns about how sponsor expectations may influence a project’s development.

“You can now sponsor developers as a seamless part of your familiar workflow,” GitHub open source project manager Devon Zuegel said in the announcement. “When a contributor answers your question, triages your issue, or merges your code, you can head to their profile—or simply hover over their username—to sponsor their work.” 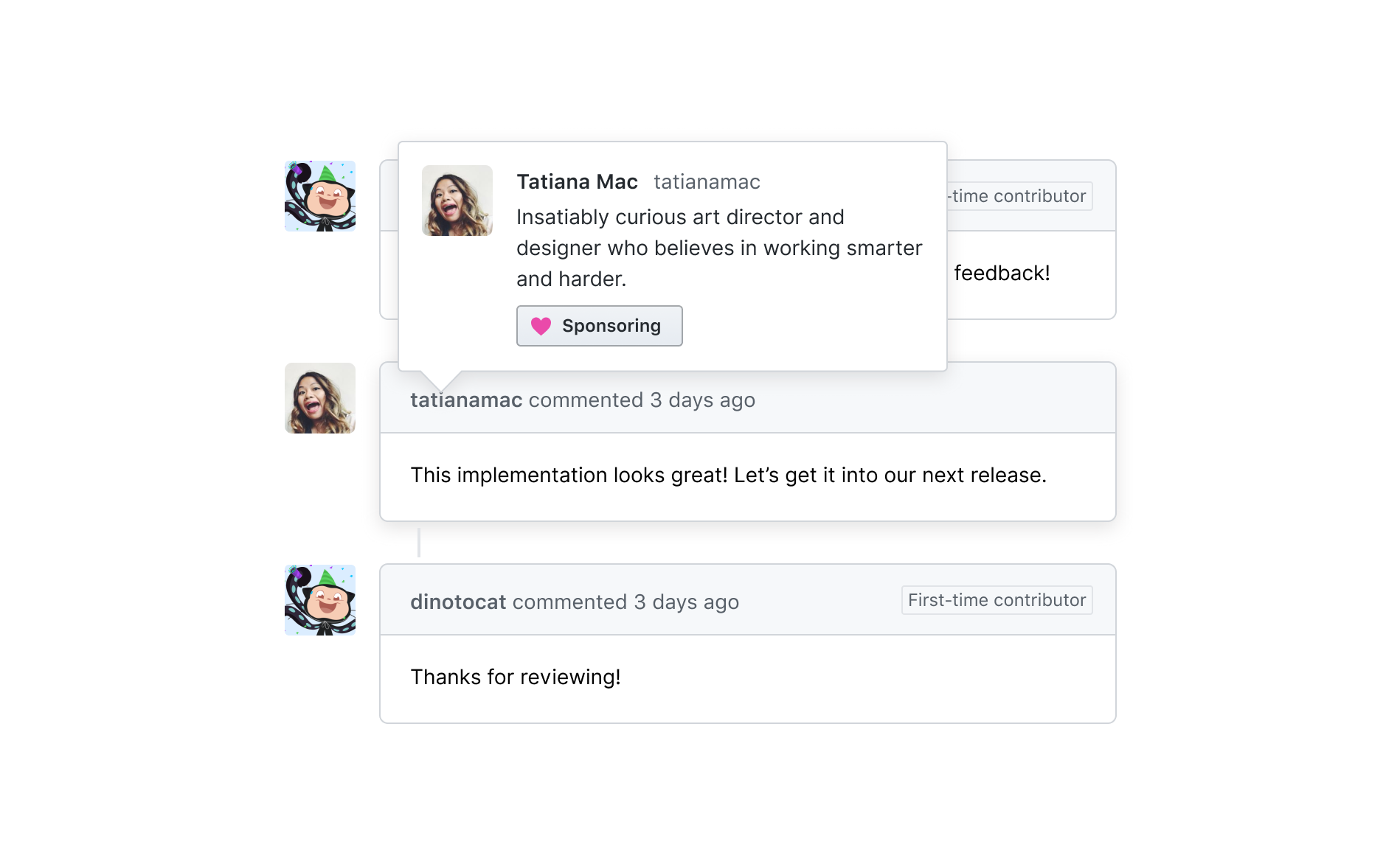 Sponsorship is a somewhat subjective term and GitHub isn’t defining what it means here in the context of marrying it to a contributor’s workflow. For some, it may mean a no-strings-attached donation. For others, the idea of sponsorship always comes the expectation of a return on an investment.

Ruby on Rails creator and Basecamp founder David Heinemeier Hansson was one of the most prominent to raise concerns about GitHub’s Sponsors program on Twitter. He sees it as “a grave risk to open source.”

“’Why haven’t you fixed my issue yet!? I sent you $10! I demand you honor your obligations here. I paid you,’ welcome to small-donation open source 2019,” Hansson said.

“I’m sure GitHub had all the right intentions here. And I’m sure this will work out well for a select few developers who will amass enough donations to ignore individual claims to their time. But I think it’s a grave risk to the culture of open source.”

Hansson referenced a recent keynote he delivered at RailsConf 2019 titled “Open source beyond the market,” challenging those whose initial reactions are simply that “donations are a good thing.” Bringing the concept of sponsorship a into the workflow introduces a transactional nature to the work, with unavoidable marketplace expectations that can complicate a project’s development.

“The marketplace norms are hard to escape,” Hansson said in his keynote. “They seep into our unconsciousness. There are plenty of open source users who think themselves less as a recipient of a gift and more like customers with warranty claims, that they’ve done the makers of said open source software a great honor by merely choosing to use their thing.

Others have expressed more specific concerns, such as Microsoft’s GitHub becoming the dominant payment platform for open source developers, sponsors receiving priority consideration in issues and PRs over user and project needs, and developers deliberately introducing bugs in order to solicit donations.

Pia Mancini, co-founder of Open Collective, wrote a response to the concerns that people were sending her way on Twitter.

“I am really happy to see such an important player in the ecosystem helping out with the problem of sustaining open source,” Mancini said. “Sustaining our commons is an effort that requires everyone to contribute. I am glad to see Github come on board.”

This idea of the sustainability of open source and the “tragedy of the commons” is one that Hansson and many others reject, but it is one that is commonly embraced by copyleft advocates. It works for Open Collective’s business model, but comes with its own flavor of reciprocity. Open Collective is distinct in that its funding service is removed from the direct workflow of software development, instead of deeply integrated like GitHub’s Sponsors tool.

Mancini said that her company can “happily coexist with GitHub Sponsors” because of Open Collective’s chief differentiators. It was built for projects, not individuals. It offers full transparency about where funds come from and how they are spent. The company also manages the paperwork and tax forms required for fiscal sponsorship.

“Open Collective is for funding projects as opposed to individual maintainers,” Mancini said. “We strongly believe in supporting communities as a whole, as well as the individuals that make up that community. This helps with ensuring more diversity, and less concentration of power and decisions on one maintainer.”

She also cautioned against GitHub trying to swallow up too many aspects of the open source community and injecting its own corporate interests. She hints at a line that the company has not yet crossed but many are still wary of what Microsoft plans to do with GitHub.

“Of course, there’s risk: centralization and lock-in are very risky for communities,” Mancini said. “GitHub is Microsoft, which has its own metrics in mind, and it will be difficult for them to be independent, regardless of the good faith of the folks involved.

“Attempting to own all aspects of the open source community is a harmful strategy. So far, I don’t think GitHub is trying to do this. They are in a position to help, and they are open to collaborating with existing players.

“Does it compete with Open Collective? To some extent. But our growth has never been primarily driven by individuals giving to individuals, but by companies giving to projects. GitHub Sponsors does not solve the need sponsor companies have for invoices and a legal entity to engage with for their vendor systems and documentation requirements.”

GitHub’s intentions may simply be a recognition of what open source software has matured to become – a driving force of innovation in all industries and an effort worthy of financial support. Giving developers an easy way to receive some reward for their contributions seems rather innocuous, but the concern is that Microsoft cannot foresee the long term consequences of its sponsorship implementation inside GitHub’s workflow. Open source project maintainers who pressed GitHub for more consideration of open source workflows may get more than they bargained for.