Anders Norén has launched a new website called WP Glossary that contains definitions for terms that people encounter when using WordPress. The resource was born out of a need to provide documentation for client projects.

“The last time I updated the glossary for a new client documentation, in the middle of May this year, it hit me that there must be a website for this,” Norén said. “A list of WordPress definitions written not for WordPress developers, but for those who manage WordPress websites either as part of their work or in their spare time.”

Norén said he found resources written for developers but nothing satisfactory for regular WordPress users. Inspired to fill this gap, he bought a domain name and built the site over the next couple weeks. WP Glossary contains definitions for nearly a hundred WordPress-specific and industry-related terms, with more than 25,000 total words. 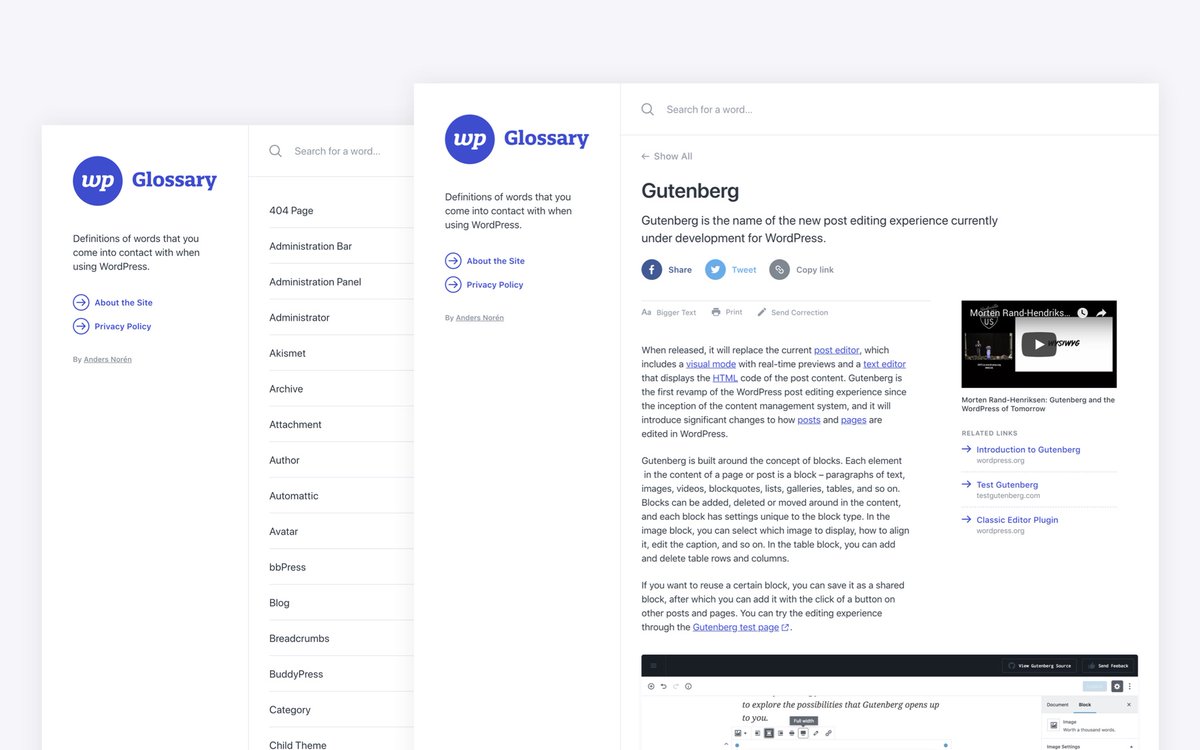 Norén, who has recently jumped into client work with a new agency, is better known for his popular minimalist themes on WordPress.org. His 17 themes have a cumulative rating of 4.97 out of 5 stars and more than 2.1 million downloads. He designed the WP Glossary site, wrote all the definitions, and credits Thord Hedengren for feedback on the design and editorial assistance.

Each glossary term includes a plain English definition and common use cases with a bit of WordPress history sprinkled in. The terms also link to related documentation and some also have related WordPress.tv links. The Default Themes term is the longest article on the site with 1,744 words. Each term has a “Send Corrections” link that visitors can use if they see a term that could be improved.

WP Glossary was enthusiastically received when Norén announced it on Twitter. Many commented that the site will be useful for meetups with members who are new to WordPress and need a quick way to look up some of the jargon they encounter.

Norén’s glossary project overlaps with a glossary the WordPress Marketing team published earlier this year. WP Glossary is more in-depth and contains less techspeak than the marketing team’s copy. It is also targeted at people who use WordPress as part of their job or as a hobby.

The sheer volume of terms on this site reveals how much insider language one encounters while managing a WordPress site. If you’re working in the WordPress world every day, it’s easy to forget how unfamiliar these terms are to new users. WP Glossary is released under the Creative Commons Attribution 4.0 International license (CC BY 4.0) so freelancers and agencies that want to duplicate, modify, and share the material have permission to do so with attribution.