When version 3.0 of the WordPress Plugin Boilerplate was released, it came with a brand new community website. After three years of continual improvement, creator Tom McFarlin felt that the project had finally matured enough to warrant its own branding and website.

As the boilerplate gained traction, McFarlin started receiving numerous requests for a generator to simplify the process of searching and replacing text strings throughout the boilerplate’s codebase. Although the boilerplate greatly speeds the process of structuring a new plugin to use a standardized, object-oriented foundation, it still requires the developer to manually replace strings for the plugin name, slug, URI and author info.

Fans of the boilerplate have tried different approaches while attempting to come up with a generator, including one that uses a grunt-init template to generate a plugin from the boilerplate. While this solution generates a plugin in about 30 seconds flat, grunt isn’t necessarily a part of every developer’s workflow.

Today, McFarlin introduced a new generator option created by Enrique Chavez, which provides the simplest approach to date. The WordPress Plugin Boilerplate Generator is a web app that generates a plugin without you having to replace any text strings. 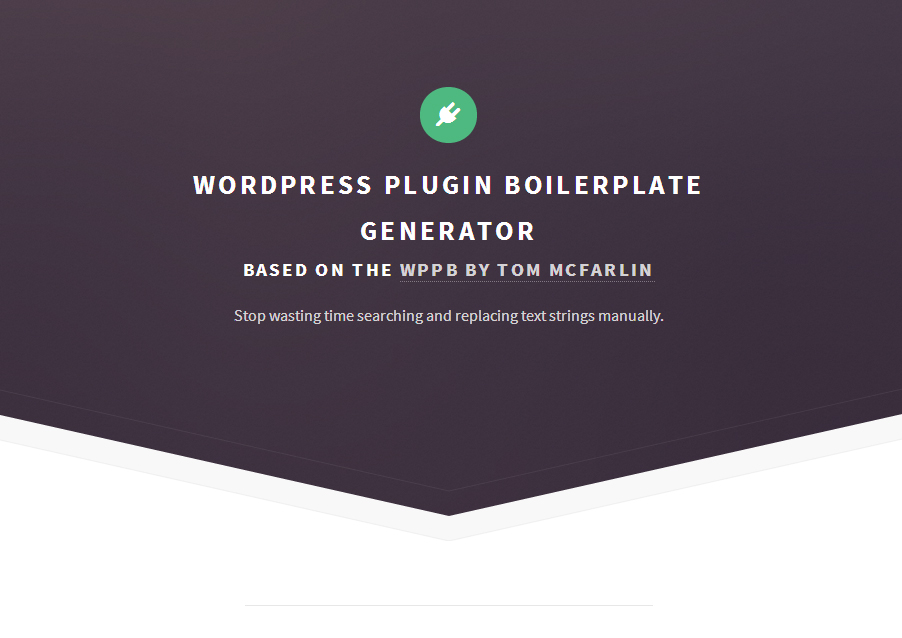 Simply enter your plugin information into the form on the site. When you click the “Build” button, the app will pull the code from the Boilerplate’s master branch on GitHub and will automatically replace all the necessary text strings. The result is your customized plugin delivered in a tidy zip file. If you use the WordPress Plugin Boilerplate as a starting point for your new plugins, this generator is a handy site to bookmark.

The WordPress Plugin Boilerplate has now been starred more than 2,400 times on GitHub and has been forked more than 600 times. The project currently boasts 46 contributors and continues to grow. McFarlin plans to add more helpful resources to the boilerplate’s community site in early 2015 along with detailed documentation.