NetNewsWire 5.0 was released this week as a completely rebuilt, free and open source Mac app. Back in its earlier days, the 17-year old RSS reader was widely regarded as the best available. Since its creation, the app has changed hands multiple times through two acquisitions, finally landing back home with its creator, Brent Simmons, in August 2018.

NetNewsWire 5.0 retains much of its original character while incorporating modern features like JSON Feed support, Dark Mode, a “Today” smart feed, syncing via Feedbin, starred articles, and more. It is a brand new app that doesn’t use any code from previous versions. Users who are updating from older commercial versions can export OPML from the old app and import it into the NetNewsWire 5.0 app.

Notably lacking from the app is the ability to sync data across devices. Right now this is only possible if users hook up Feedbin. Simmons said he is working with contributors on an iOS version of the app. 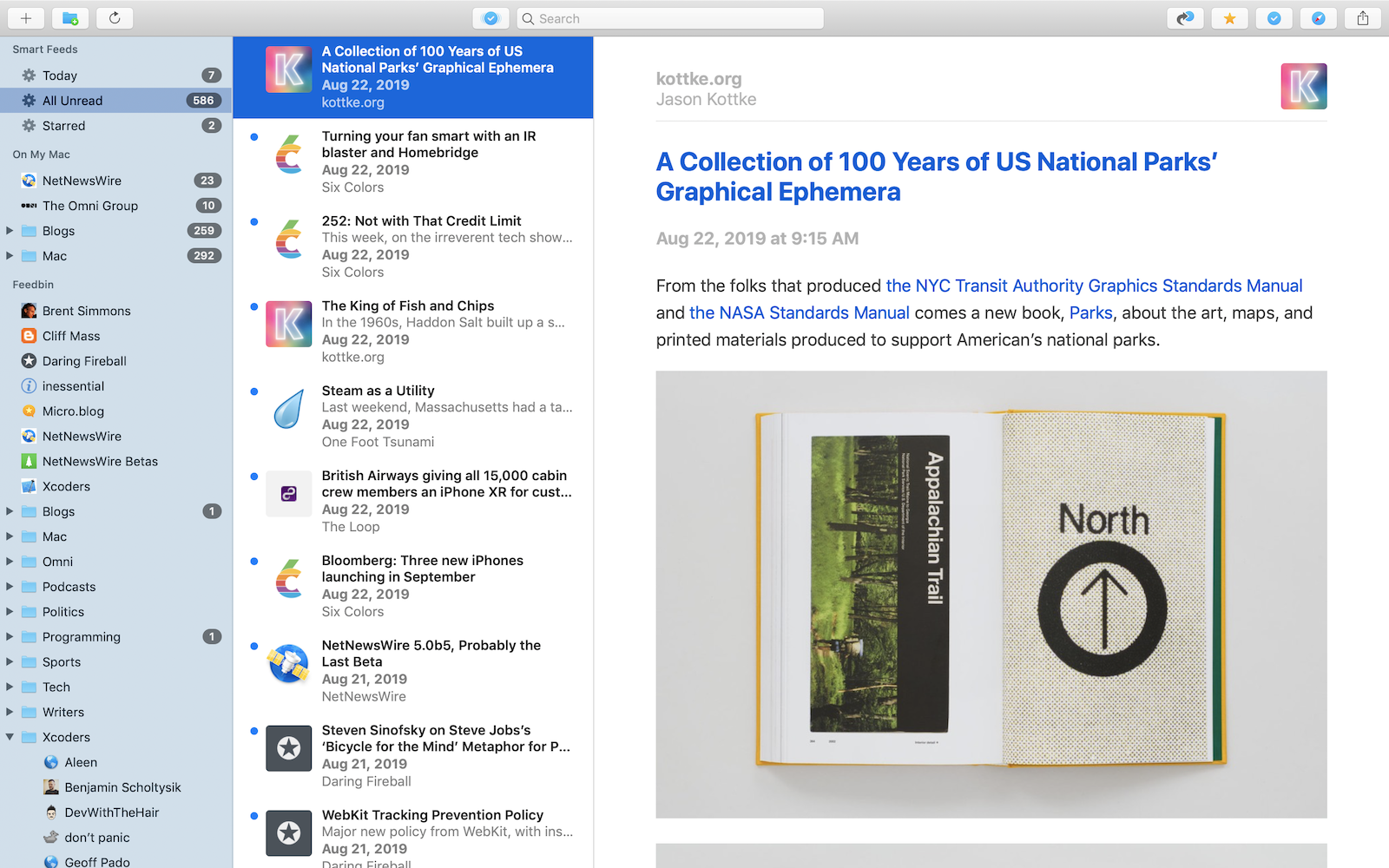 Although it may not yet have as many features as some of its contemporaries, NetNewsWire’s return was celebrated by those who are hopeful that RSS can be one of the key technologies for unshackling web users from social media silos. NetNewsWire is back in support of this mission, which is highlighted on the app’s homepage:

We support the open web. The big social networking sites are damaging society and eroding democracy — and we believe one of the ways out of this is to get our news via the open web rather than from Twitter and Facebook.

NetNewsWire is part of repairing the web we lost, and it’s part of building the web we want. That future web should not include viral hate speech, abuse, massive corporate surveillance, or successful influence operations by hostile governments and entities opposed to democracy.

NetNewsWire is no longer owned or sponsored by any corporation. In fact, the app’s GitHub repo has a support document that says: “First thing: don’t send money. This app is written for love, not money.” It outlines the project’s values:

NetNewsWire is all about three things:

In contrast to recent experiments and conversations around sustaining open source infrastructure, NetNewsWire’s approach gives the project the creative freedom to take risks and ship software at their own pace.

When one commenter asked on Twitter about NetNewsWire’s business model, Ruby on Rails creator David Heinemeier Hansson commented in defense of the project’s lack of a plan for making a profit.

“Not everything needs a business model,” Hansson said. “Writing open source software for fun, for the intellectual challenge, for the expression of creativity, are valid reasons. Same too goes for writing and sharing. Filtering everything through WHERE’S THE MONEY is a disease of the soul.

If you’re looking for a new RSS reader to aggregate your news in a more calm environment than Twitter or Facebook can provide, NetNewsWire is a strong open source option with an exciting future ahead. Few apps have this kind of longevity, and it will be interesting to see how it evolves as an open source Mac app. As of version 5.0, it’s still fairly minimalist in terms of features but has a lot of momentum and a passionate community behind it, which in this case has proven more valuable towards ensuring its future.