Developer Manton Reece is on a mission to take back short form content for the open web by providing better tools for independent microblogging. Most short form content today is posted through centralized social networking sites like Facebook, Twitter, and Instagram, where posts are mixed with promoted content and users have no control of their timelines. There’s no guarantee that these social networks will be around forever, as many before them have disappeared, eclipsed by new ways to connect online.

Reece set out to create Micro.blog, a timeline and publishing platform for the open web, as an alternative social network that encourages more independent writing. He launched a Kickstarter campaign to fund the platform along with his work on a book called Indie Microblogging. The project’s $10K goal was fully funded on the first day and has passed $22,000 on the second day of the campaign.

Micro.blog has a timeline experience similar to Twitter with replies and favorites, but the main difference is that it is based on RSS, pulling posts from independent sites. Those who don’t have their own websites will be able to opt for a hosted microblog and map a custom domain. Users with hosted microblogs can post via a web interface that includes a Markdown editor or use the service’s iPhone app. 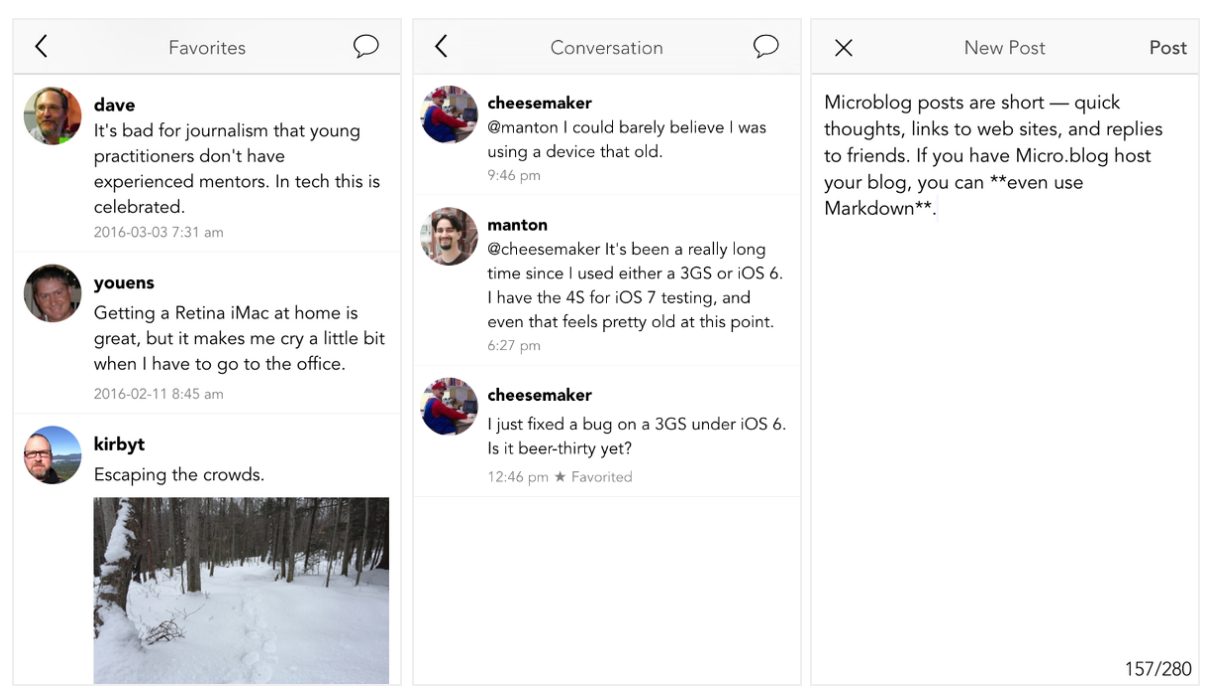 Micro.blog Will Integrate with WordPress

Reece, who self-hosts his own blog on WordPress, will be launching Micro.blog with full integration for WordPress users, making it easy to cross post between the two platforms. I asked him about the workflow for publishing from WordPress and he said his Indie Microblogging book will contain a section specifically on WordPress.

“After you’ve told Micro.blog about your WordPress RSS feed, you can continue to post to your blog as you normally would, although I’ll have some tips for taking the best advantage of it,” Reece said. “There’s also a native iPhone app for Micro.blog that supports direct posting to WordPress. I’ve found that it really improves the user experience to have a single app with a timeline experience, replies, favorites, as well as easy posting directly to your own site. But there’s no requirement to use any specific app.”

Reece said he plans to implement a very strict, reverse-chronological timeline for content that users are following. He also does not plan to introduce any algorithms or advertising. Basic accounts will be free and the plan is to sustain the platform with revenue from a paid plan that includes extra features like microblog hosting.

“One thing that is very important to me is not letting someone you don’t follow interrupt your timeline with harassment or other replies that aren’t appropriate,” Reece said. “I’m working on some features around this that I hope will help avoid similar issues that Twitter has faced in its community, for example. So if there are any custom algorithms or curation it will be around trying to deal with abuse before it happens.”

The Micro.blog platform is currently built using Ruby, Sinatra, Ember.js, MySQL, and Redis. Reece said he is in the process of rewriting some of the app with a more traditional Ruby on Rails setup.

“Ember didn’t end up being a great fit for the design,” Reece said. “There is also a portion of the microblog publishing engine built on Jekyll, so that themes and data files can be more portable.”

Micro.blog isn’t entirely distributed where users host their own “pods” like Diaspora, but Reece said he is open to making it more decentralized in the future.

“It’s a good goal to eventually move to something even more distributed, but it introduces a lot of complexity, which has prevented most of those kind of solutions from taking off,” Reece said. “I hope that Micro.blog is a step in the right direction, encouraging people to write more on their own site even for short microblog posts, instead of just Twitter and Facebook, with more open formats and APIs. It’s more achievable if we can build off of tools like WordPress instead of starting over.”

Reece said he thinks WordPress.com (Automattic) is one of only a couple web publishing companies he believes could last 100 years. “Only 2 companies keep coming to mind: WordPress.com and GitHub,” he said in a post about mirroring his blog to GitHub. “I believe both will last for decades, maybe even 100 years, and both embrace the open web in a way that most other centralized web sites do not.”

During his 14 years of blogging and 10 years of using Twitter, Reece became an advocate for the open web. He said he used to be excited about Twitter and built apps for the platform but grew disillusioned at their approach to locking down the API.

“We’ve been so focused on writing on Twitter and Facebook that we’ve gotten away from more independent publishing that makes blogs and the open web great,” Reece said. “I think microblogging has a place on the open web, and that posting to a blog and reading posts from friends can have just as great a user experience as using a traditional social network. I’ve already heard from many people who have been inspired recently to blog again, which is really the main goal of Micro.blog.”

The Micro.blog Kickstarter campaign will end in 27 days. Reece said he was surprised the project was funded so quickly. He plans to work hard over the next month to roll out Micro.blog to everyone.

“I can’t wait to see how users use the service, how the book can help WordPress users expand their existing blogs, and what developers want to build on the APIs going forward,” Reece said.