WordPress 4.9.8 was released as an automatic update last week, featuring the “Try Gutenberg” callout. The goal of the prompt is to get more users testing the new editor and to raise awareness. Within the first 72 hours of the prompt going into user dashboards, sites with Gutenberg installed have shot up to more than 80,000, a 300% increase. The plugin has been downloaded more than 147,000 times in the past week.

Gutenberg feedback is pouring in from a wave of new testers, most of whom are finding out about the new editor for the first time. Reactions have varied widely across multiple social networks. The announcement on WordPress’ official Facebook account attracted many drive-by style comments that included negative reactions, confusion, and questions, with a few positive comments peppered in between.

Blocks aren’t doing it for me. Will classic continue to be available permanently? If I want a block visual editor I promise I will install one voluntarily.

I see only few users who are exited from Gutenberg. The rest is for leaving as it is. Why the guys from WP still want to implement it in the core? Make it a plugin. Why not a plugin whyyyyyy?

Twitter users trying Gutenberg for the first time were more enthusiastic about the potential of the new editor.

While some testers are quietly reporting issues on GitHub, others have written long missives in the plugin’s reviews, begging WordPress not to force the new editor on users. Gutenberg reviews are currently at a 2.4-star average, slipping from the 2.7-star average it held prior to the 4.9.8 release. Those who have written reviews tend to have reactions at both ends of the spectrum.

At this point in the testing phase, the reviews in the official directory paint a grim picture of WordPress dragging its users kicking and screaming into the Gutenberg era. However, there are many reasons why a tester might be motivated to write a negative review. Some may have ignored the advice not to use it in production, some may be testing it with incompatible plugins, some may not want any changes to their established workflow, and some may simply not like the interface. 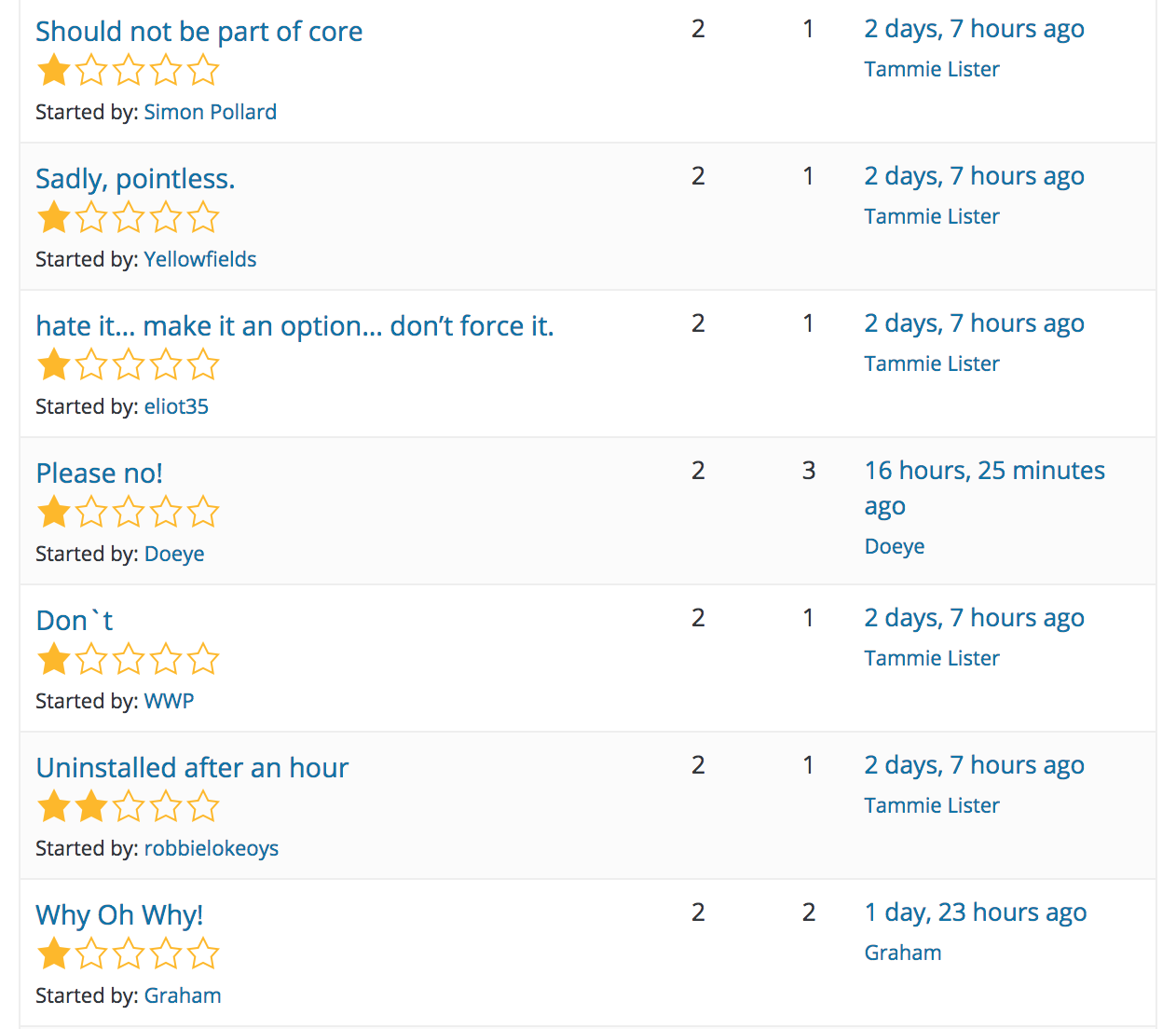 While it may seem that the plugin has been widely panned by new testers, those who are the most critical tend to be more motivated to write a review. Those who are pleasantly surprised at something that works for them don’t tend to comment publicly. Reviews cannot possibly tell the whole tale, but they are important to monitor for feedback that could help Gutenberg succeed.

WordPress 4.9.8’s “Gutenprompt” is doing exactly what it was intended to do – bring out more testers. The invitation has already succeeded at pulling out some quality feedback if you can sort through all the casual, angry one-liners.

Steven Peters opened a lengthy review with the following observations about the more cumbersome and unintuitive aspects of Gutenberg’s interface:

The interface is not cohesive in its design. For example, To place a block of a paragraph, a heading, a subheading, a bullet list and every other block, the user must click the + sign every single time, making it that much harder to ‘go with the flow’ of writing, and is cumbersome and time-consuming. Time-consuming: a click for each block instead of just writing. More clicks equal wasted time.

In a review titled “Lots of potential but too soon for core,” Mark Wilkinson details several specific usability issues:

The interface I find confusing – I think it is because it is too minimal. I found that it was all too easy to add a block by mistake and then not knowing what the block was or why it was there.

There is too much reliance on hover effects, with things appearing and disappearing all the time. I also find it hard to know where the focus is on the screen as it just uses a faint grey border.

Several reviewers were candid about their distaste for the concept of putting content into blocks. The Gutenberg team has readily communicated its vision for the block-based editor, but this tends to speak more to developers.

“Why does every little thing have to be in a separate block?” one reviewer asked before describing multiple usability issues with current block behavior. “That is a feature I think I actually detest. I do not want 50 zillion little fussy blocks on a page. I had entire blocks just disappear on me and a lot of the time, I was initially unsure of exactly what I did to make them disappear. This is bad. Some of the time it was placing a block, like an image block, and then deleting the image … the entire block went, which meant I had to go through the motions to add the block, then add an image block again, and then add my image again. Lame.”

Multiple reviewers commented that previously simple tasks are much more complicated in Gutenberg. Others said after reading official replies to reviews, they felt that leaving specific feedback was a waste of time. Canned responses from the Gutenberg team gave some the impression that their feedback wasn’t heard or valued.

My feeling while reading the WordPress developer responses is that that they have no intention of either stopping or postponing Gutenberg no matter what bug or problem is given to their attention. – @lauritasita

I have read all the reviews (and also the Gutenberg-lovers’ replies) and it seems that it is not really a discussion. The question on what is missing in this editor is useless if people simply do not want such a feature in their install. All you do is trying to convince people that it would only take time to get used to a modern technology. In my eyes this is bullshit. I myself love new features – if they are useful. – @peg20

Based on the responses to reviews, it isn’t clear to testers whether the Gutenberg team is willing to make major changes to re-design features that are not easy to use or whether they are simply combing the reviews for feedback on bugs with the existing interface.

Classic Editor Plugin Installations are on the Rise as Users Prepare for WordPress 5.0

In the days following WordPress 4.9.8’s release, active installations of the Classic Editor plugin have jumped from 7,000 to 60,000, a 757% increase. However, none of these figures in isolation can tell the whole story of users’ experience with the new editor.

In response to criticism on the Advanced WordPress Facebook group, Gutenberg contributor Gary Pendergast said he doesn’t see users installing the Classic Editor plugin as a negative reaction. “People ensuring that their site is ready for WordPress 5.0 is absolutely a good thing,” Pendergast said. “For a lot of sites, that means sticking with their current workflows for now.”

Pendergast also said the growing number of Classic Editor installs is a good indication that WordPress users are “proactively maintaining their sites, and a reasonable indication that they intend to upgrade to WordPress 5.0.”

“People certainly have strong feelings about it, and ‘fear of change’ is absolutely a legitimate feeling: we need to provide the right tools to empower everyone who uses WordPress,” Pendergast said. “Some people will jump right into the brave new block-based world, some people will prefer to use the Classic Editor plugin as a way to keep their existing workflows. When WordPress 5.0 lands, neither way should be seen as the ‘correct’ way – they’re both entirely legitimate.”

One major theme in both positive and negative reviews of the plugin is the desire for Gutenberg to be opt-in for WordPress 5.0, instead of having it auto-enabled for all users.

The "Try Gutenberg" callout in WordPress 4.9.8 looks great! Would love to see this be the official approach when WordPress 5.0 is released vs auto-enabling. Give the users time to check it out before forcing it on them. pic.twitter.com/QBiPh7IROe

Developers and agencies are expected to control that experience for their clients by installing the Classic Editor or Gutenberg Ramp for installations that may have compatibility issues. For millions of other WordPress users without their own developers or engineering teams, discovering Gutenberg auto-enabled after updating to WordPress 5.0 will be a moment of reckoning. On the other hand, phasing the new editor in over time may severely limit adoption and extinguish the ecosystem’s impetus to offer Gutenberg-compatible products.

The development community, along with thousands of WordPress users who now have Gutenberg on their radar, will be watching to see how the team evaluates feedback from this new wave of testing. Up until this point, only the most curious and motivated WordPress users have taken Gutenberg for a spin. Widespread testing has just begun and we’re not yet seeing a complete picture of how well the new editor will be received.

My initial impression, after first trying it a year ago, was that Gutenberg is the most exciting thing to happen to WordPress in a long time. After reading hundreds of negative reviews, I still believe in the block concept but am convinced that Gutenberg needs to deliver a beautiful writing experience in order to win people over.

If WordPress is my home for writing on the web, I want to feel at home in the interface. I don’t want to have to hunt for actions buried two-clicks deep. When I use the editor I want to have the feeling of “I love writing here.” Gutenberg doesn’t deliver that yet.

WordPress has an opportunity to provide the best writing experience on the web, instead of relegating it to the myriad of dedicated writing apps that don’t have publishing capabilities. A supremely well-designed editor for writing posts, in recognition of the platform’s blogging roots, would be the promise that hooks users to willingly sign on for years of dealing with Gutenberg’s shortcomings as it matures into a full-fledged site builder.