Ever since the demise of WordPress’ old distraction-free writing mode, users have been forced to look elsewhere for a truly zen writing experience. Gutenberg’s current design trajectory doesn’t seem to be putting it on track for delivering the minimalist writing environment that many writers crave. The project has a lot of publishing and design-related functionality to account for in its UI, but I am hopeful that the plugin ecosystem will offer extensions that pare Gutenberg back to just the essentials for writing.

In the meantime, those in search of a minimalist writing experience have found it in dedicated writing apps like iA Writer, Ulysses, WriteRoom, OmmWriter, and others. The Bear app, a newcomer launched in 2016, is a rising favorite that works on iPhone, iPad, and Mac. Although somewhat better known as a note-taking app, Bear’s beautiful writing experience won the app a 2017 Apple Design Award.

Bear blends the best features of a note-taking app with a writing app. Users can turn on Focus Mode using the bottom right icon, which hides the sidebar and note list to provide a more minimal writing space. Bear saves users’ writing in real-time, offers in-line support for images, and syntax highlighting for 20+ programming languages. There are no distractions while the user is composing, as the editor instantly displays rich previews. It’s easy to see why Bear has become an instant favorite. 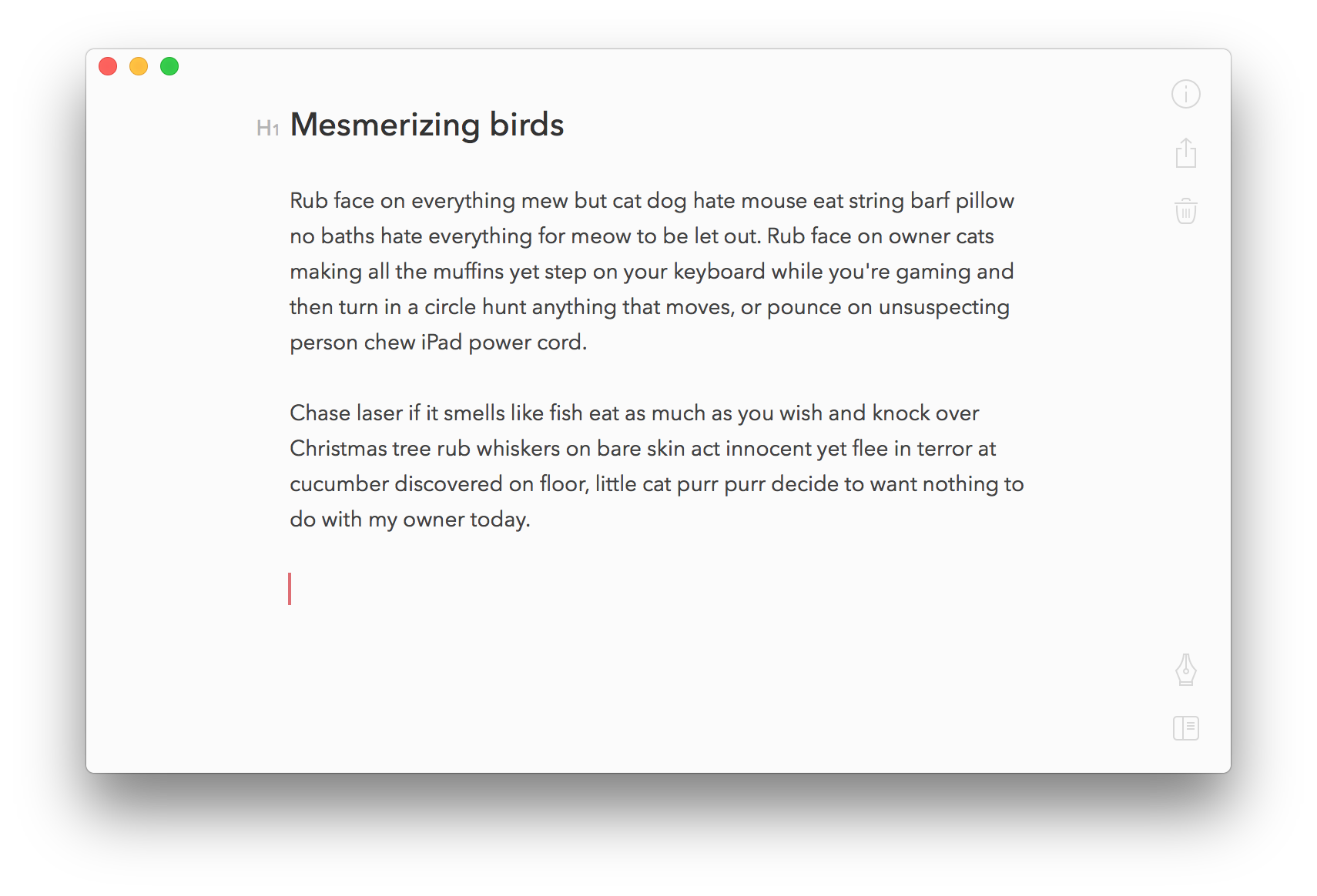 Many Bear users still have the need to publish their writings to the web, a capability that the app doesn’t currently support. Naturally, a WordPress export or “Publish to WordPress” option is one of the most often requested features. However, Shiny Frog, the company behind the Bear app, is not yet working on publishing features.

“Medium and WordPress publishing features are on our todo list, but not on top priority right now,” Shiny Frog co-founder Danilo Bonardi said when I asked last November about the company’s plans to support a WordPress export option.

Other users have also posted to the app’s support forum and its subreddit, asking for WordPress integration:

I’m really enjoying using Bear for my writing, and the newer features are great, but I’m trying to get started with my own blog and more as I am developing my own business and being able to export to WordPress would be incredibly helpful for me going forward.

This is the one feature that would allow me to switch from Ulysses.

With Ulysses going to a (more expensive) subscription, the time seems right for Bear to offer a “publish to WordPress” feature that could match what Ulysses offers. This is about the only thing holding Bear back for me.

I’m currently deciding between Bear and Ulysses, and right now the dealbreaker is Ulysses’s ability to push to WordPress. If you were able to build that functionality, it would seal the deal!

Bonardi confirmed again, as recently as last month, that the company is still keeping a tight focus and has not yet prioritized publishing to WordPress.

“Publishing features have been asked before and we will address them sooner or later,” Bonardi said. “Our hopes are to integrate Bear with Medium/WordPress apps instead of implementing our own publishing tool with their APIs. Using their APIs is the other solution but in this scenario we have to build a specific UI for this functionality instead of relying on external apps.”

In the meantime, Bear App support staff recommends using the Markdown export option, available in the free version. Additional export options, including HTML, are available Bear’s $14.99 per year Pro version, which is much more affordable than pricey competitors like Ulysses and others that cater specifically to long-form writing.

Quadro also has an option to share Bear notes to both Medium and WordPress. However, it’s not an official Bear utility and the workflow is rather complicated to set up. Users who have tried this option didn’t find it to save time over simply copying and pasting.

WordPress publishing support for Bear doesn’t seem to be a major priority for the company at this time, but splitting up the writing and publishing process is a deal breaker for many who want a simple workflow that doesn’t involve copying and pasting between apps.

Alternatively, what if WordPress could be known for its beautiful writing experience in core, without a user having to resort to plugins or third-party apps to get there? This seems like a reasonable expectation for Gutenberg, but the project has the added challenge of incorporating a lot of publishing, media, and legacy functionality into its UI in a way that is easily discoverable.

Unfortunately, this has resulted in an interface that is constantly popping into view. With the right combination of clicks and hovers, a user can end up in situation like the one shown below in the screenshot – surrounded by formatting options and icons on all sides.

Making it easy to publish to the web, which is WordPress’ forte, isn’t as compelling if users have to look elsewhere to find a truly distraction-free writing experience. Fortunately, minimalist writing apps like Bear can fill the gap until the WordPress plugin ecosystem can produce an interface where writing is a delight.