Last week we reported on Laraberg, a Gutenberg implementation for Laravel that is now in beta. The project was based on Gutenberg.js, a package that makes it easier to bring Gutenberg into other applications.

Nick Khaetsky, a backend developer at Biz-Mark, took Laraberg and used it to build a Gutenberg plugin for the open source OctoberCMS, which is based on Laravel. OctobeCMS was launched in 2015, and still captures only a tiny sliver of the CMS market share, but it is growing in popularity among the top one million websites, according to stats from BuiltWith. The CMS has a growing ecosystem of more than 700 themes and plugins.

The Gutenberg for OctoberCMS plugin is now in beta. It allows developers to embed Gutenberg in the backend via their own model by creating a Polymorphic relation. The plugin integrates Laraberg but all of its blocks are standard from the Gutenberg.js package. It doesn’t include anything custom.

Most aspects of Gutenberg are working in the beta, including common blocks, formatting, layout, and embed blocks, custom styles, and block settings. 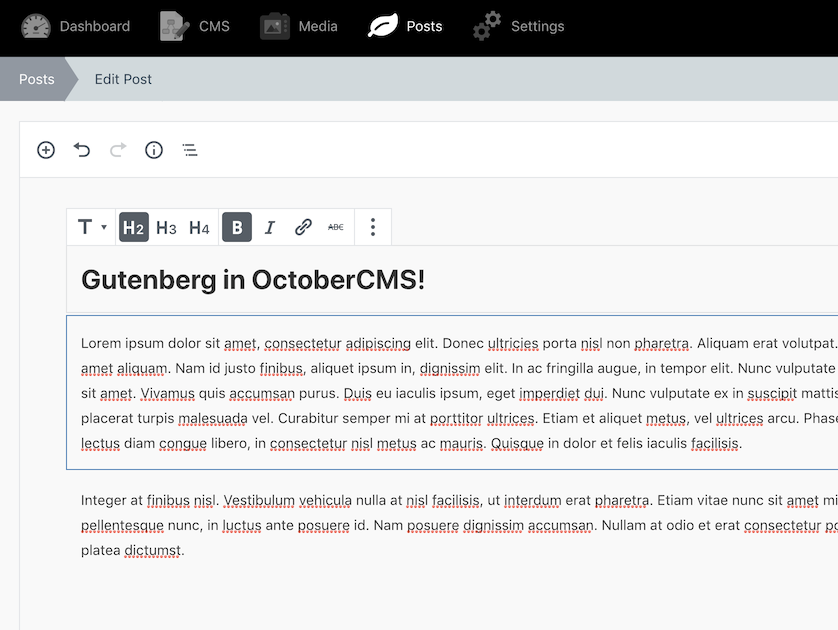 None of WordPress’ standard widgets work in the plugin and Khaetsky said he plans to remove them in future updates.

Anything that requires media uploading, such as the gallery block, inline images, and cover block, are not working. Khaetsky said he is working on getting the plugin integrated with the native OctoberCMS Medialibrary. He encouraged anyone who wants to contribute to that effort to submit a PR to the plugin’s GitHub repository.

Khaetsky’s free plugin is MIT-licensed and available in the official OctoberCMS plugin marketplace. The plugin’s adoption is limited to developers who know how to implement it, but it already has 39 installations. Documentation is available on the plugin listing.

One response to “Gutenberg Plugin for OctoberCMS Now in Beta”