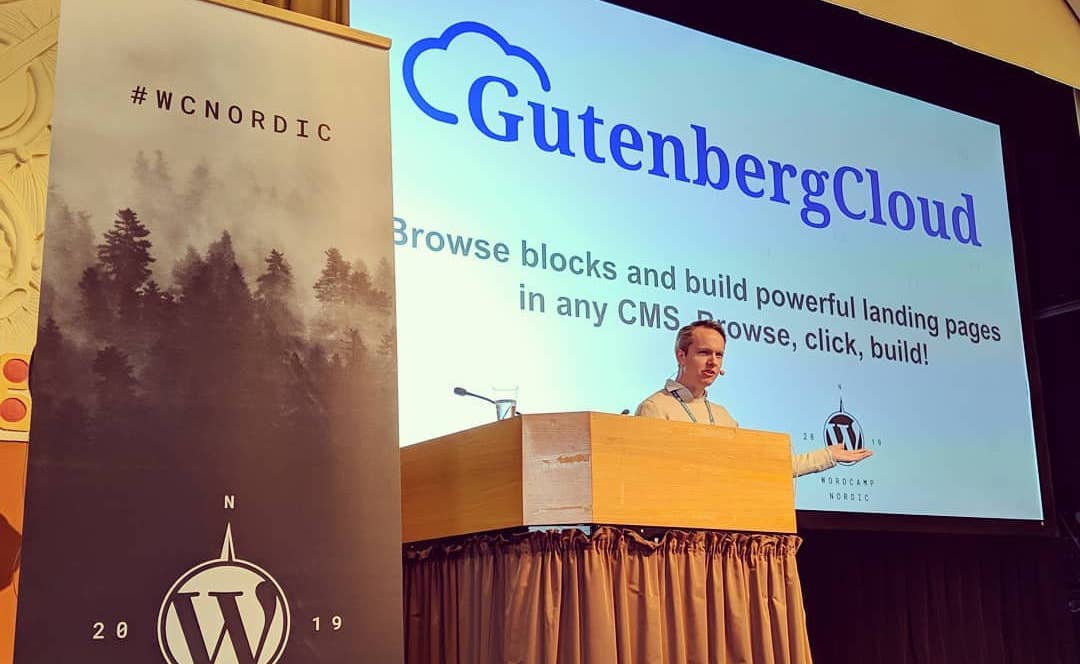 Frontkom‘s presentation at WordCamp Nordic introduced the audience to the Gutenberg Cloud project, which allows developers to share JS-only blocks across CMS platforms. Marco Fernandes and Thor Andre Gretland, representatives of the 45-person agency based in Europe, are also part of the Drupal Gutenberg project that brings WordPress’ open source editor to Drupal via an optional module. The module’s release candidate has been downloaded more than 9,000 times.

In the video below, I had the opportunity to sit down with the team at WordCamp Nordic to discuss the progress on their Gutenberg-related projects. Frontkom has clients using the Drupal module in production and their experience echoes a theme that seems common among those who are using the Gutenberg editor with clients.

“We see that especially people who don’t have too much experience in general working with visual content online, they find it easier to use than the ones that are into a routine where they expect some behavior,” Gretland said.

Drupal’s Gutenberg module could become a primary driver for the Gutenberg Cloud project, as access to the cloud blocks is included by default for all installations. The Cloud Blocks plugin for WordPress has been much less popular so far, with an estimated 100 active installations.

We discussed the potential of Drupal adopting Gutenberg as its core editor and the Frontkom team predicts that it will likely remain a separate module. Their vision for both Drupal Gutenberg and the Gutenberg Cloud is to make Gutenberg “the go-to solution for editing rich content on the web.” It is still achievable as a separate module but would have more impetus behind it if Drupal adopted it for its default editor.

Gretland said idea behind the Gutenberg Cloud was to provide “a sustainable ecosystem of blocks but also ease of use.” The project is a precursor to WordPress.org’s planned JS-only single block library. We discussed whether they perceive any competition between the two directories.

As the discussion on make.wordpress.org was just developing at the time of the interview, I contacted Frontkom CTO Per Andre Rønsen later on to get their thoughts on WordPress.org’s planned block directory. He had commented on the proposal, asking if this could become a library of truly CMS-agnostic blocks.

“I commented on the Make WP blog post right away, because I simply loved the idea of a directory of JS-only blocks,” Rønsen said. “We haven’t discussed it directly with Matt, but have had some good chats with the core Gutenberg team, and are planning to meet on a weekly basis. If Gutenberg Cloud can serve as a proof of concept that WP.org can later adopt as their own, we are happy. As the spec is very similar to what we already have created, porting between the two will be easy.”

Rønsen is advocating for a more open approach that isn’t so strictly tied to WordPress’ infrastructure.

“A more ideal approach however, would be to merge the two efforts,” Rønsen said. “The key for us, is to make the infrastructure open to other communities, not just WP developers. We are happy to put our project in the hands of the WP core team – given that they share the same open vision.”

A CMS-agnostic library for Gutenberg blocks is part of Frontkom’s long term vision for improving the open web. This is one of reasons the team created Gutenberg.js, which provides a foundation for using Gutenberg on any CMS or framework. Gretland said they see it as “more than just a new editor but a platform that enables communities to build new features.” This is the vision the team came to share at WordCamp Nordic. Check out the video below to hear more about how the Gutenberg Cloud team is working to make Gutenberg an editor that more open source communities on the web can share.