Gutenberg 0.7.0 was released just before the weekend with improvements to the writing flow and greater flexibility for theme authors to add their own customizations. Last week’s version 0.6.0 release made significant changes to the way paragraphs are created within text blocks, allowing for blocks to split when pressing enter. However, it inserted a “New Paragraph” placeholder that was distracting for users trying to stay in the flow of writing.

This release also introduces theme support for customized color palettes and a shared component, such as cover text and button blocks. The sample code below shows how easy it would be for theme authors to implement their own color palettes. 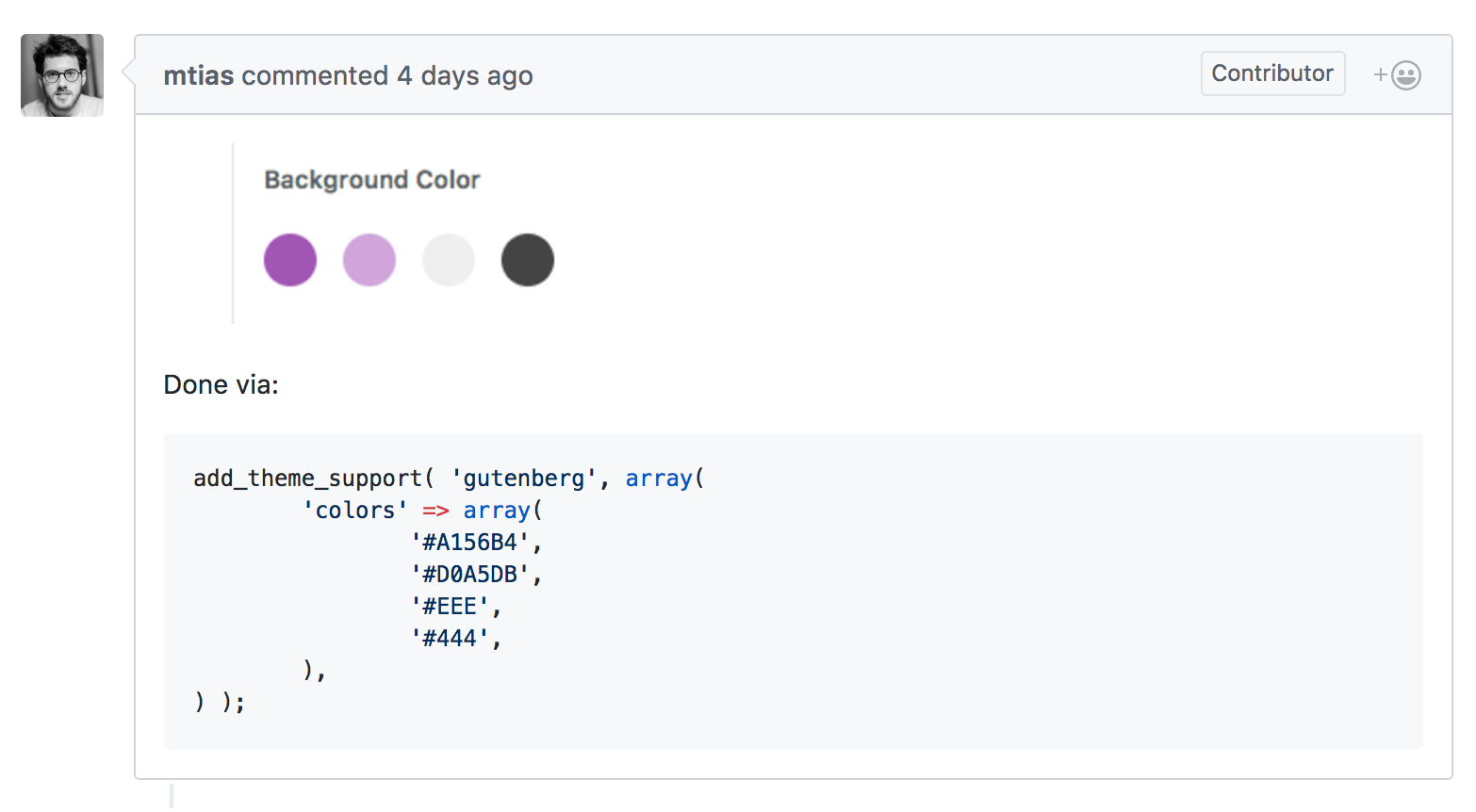 Gutenberg contributors have also added theme support for wide images. According to the inline docs, this allows for some blocks, such as the image block, to define a “wide” or “full” alignment by adding the corresponding classname to the block’s wrapper ( alignwide or alignfull ).

These additions offer theme developers a better picture of where Gutenberg is headed in regards to themes. The plugin’s contributors are slowly building in more points of customization so that theme authors can add or override Gutenberg’s styles and provide additional opt-in features to their users.

Theme support for wide images has already been committed to Tammie Lister’s experimental Gutenberg Theme. The project was created to showcase how Gutenberg will interact with WordPress themes and is still a work in progress.

After updating the Gutenberg plugin to 0.7.0 and navigating to the editor, users are presented with the option to opt into data collection about their usage of the editor. The usage data, which is anonymous and does not include post content, is sent to WordPress.com for future analysis. Gutenberg contributor James Nylen explained how the data tracking works in a post on Make.WordPress.org.

“The Gutenberg plugin contains a mechanism to count how often specific actions occur over time,” Nylen said. “If the user has previously clicked ‘Yes’ on this screen, and an event occurs that has an associated bumpStat call in the Gutenberg code, then this event is sent to WordPress.com servers by loading a special ‘pixel’ image.”

Gutenberg’s tracking code stores the “group” and “name” sent with the bumpStat call (short strings of text), along with the time the event was recorded. Nylen said the team will use the data to improve the editor based on usage patterns. This data collection information is currently only available to those with access to WordPress.com servers.

“As Gutenberg is an open-source community project, we view this data as belonging to the WordPress community, so we also plan to make this data available via a public dashboard,” Nylen said.

He shared an example of the data that has been collected from the plugin over the past few days since 0.7.0 was released. This chart is a preview of the number and types of blocks that users have added to posts while testing the editor. 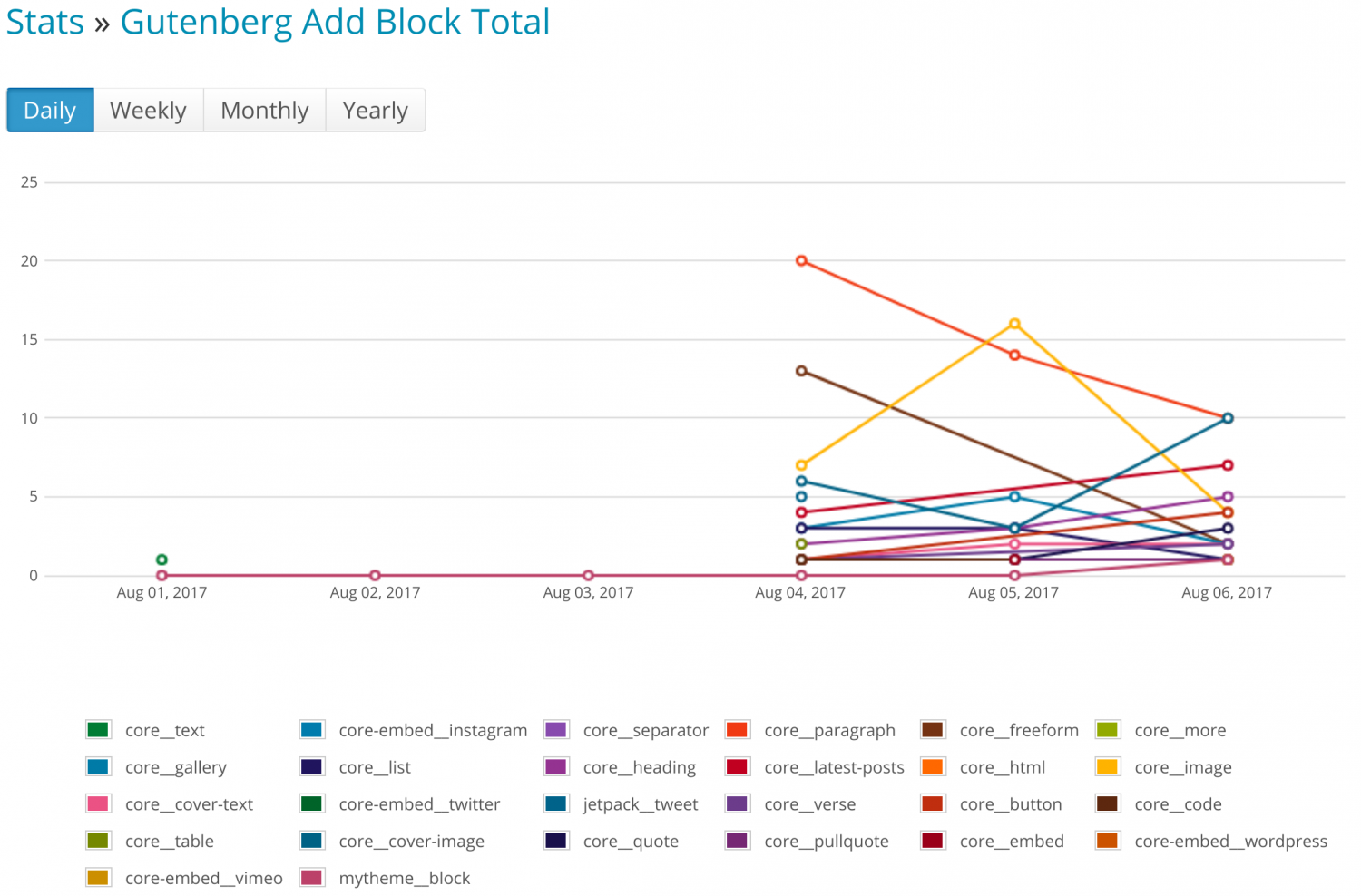 “The approach taken here is very similar to Calypso’s event tracking code,” Nylen said in the pull request for adding the data collection. “We can use the data added in this PR to inform various decisions such as default order for blocks and whether some blocks are less suitable for core, and more generally this is a very useful technique to collect user experience data.”

The majority of Gutenberg’s chief contributors are Automattic employees, so it makes sense that they would use the options and infrastructure available to them to quickly get data collection going in Gutenberg. However, the data from these tests needs to be shared with the greater WordPress community as soon as possible, since it is being collected in the name of the WordPress project. Ideally, it would have been set up to be displayed publicly before asking users to opt into the collection.

Gutenberg contributors are also considering making the data collection more modular so that it could be used with other WordPress feature plugins or existing features in the future.

“Maybe the tracking could be its own module, it could be useful outside of the editor (and other WP feature plugins later),” Riad Benguella said. “Longer term (or not), WP.org needs its own tracking infrastructure and this could be very useful to enhance WordPress.”