GenerateWP, the popular WordPress code generator site, is celebrating two years in operation this week. The site, founded by Rami Yushuvaev, launched with five code generators and now has more than 20. Yushuvaev sees the site as an educational tool that helps WordPress developers learn more about coding best practices.

Before launching GenerateWP, Yushuvaev created three code generators to serve the Israeli WordPress community. The site was an instant success, which prompted him to translate it into English and launch GenerateWP in January 2013.

The first week after launching, Yushuvaev was approached by a major brand that offered to buy the site and a few developers made offers to finance more generators. “I decided that it wasn’t the right time to give up the site, since I had big plans for it and for the WordPress community,” he said.

The site has 15K+ registered WordPress developers and averages 100,000 visitors per month, most of whom are designers and developers. During the past two years, Yushuvaev worked with contributors Maor Chasen and Ohad Raz to rewrite the entire code base to use object-oriented programming and make it work better with WordPress.

In celebration of the site’s two year birthday, GenerateWP is introducing custom code snippets, which will allow users to save their own snippets in a public and/or private library. “Front-end designers use codepen.io to showcase their code, JavaScript developers use jsfiddle.net, Bootstrap developers have bootsnipp.com, and now WordPress developers have GenerateWP.com,” Yushuvaev said.

Individual snippets allow users to share, download, or clone the code into their own libraries. Developers can embed snippets on their sites, send them to Pastebin, or create a GitHub gist. 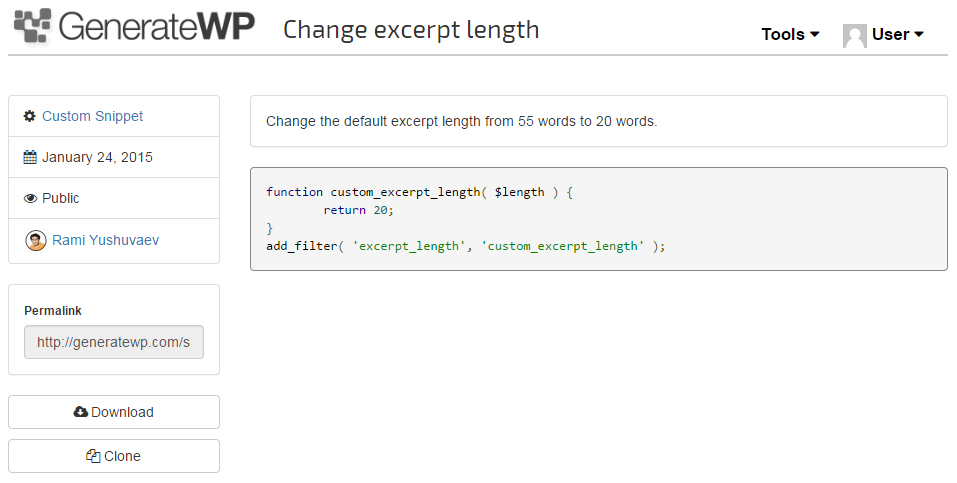 Yushuvaev has plans to monetize the site further down the road but said that the generators and code snippets will always remain free. “The money will come from other services,” he said. “I can’t reveal our plans but you can expect a game changing feature for our premium users.”

In the meantime, the team plans to create new code generators, including a tool to generate widgets, a meta box generator, and admin menu page generators. In the coming weeks, the site will also provide an oEmbed option to embed snippets using nothing but the URL.

Currently, the most popular generators on the site are the ones for creating custom post types, shortcodes, and custom taxonomies. Yushuvaev is optimistic that the site will continue to grow as more developers discover how much time they can save with the generators.

I was writing the same code over and over again (post types and taxonomies) for different clients,” he said. “Creating an automatic generator to save some time was the next logical step.” He found that writing code eats up plenty of time and did not want to utilize free plugins, as they often do not remain in active development.

GenerateWP is quickly becoming a popular tool for WordPress educators. “The site is used in WordPress classes around the world to teach new developers how to properly code using WordPress coding standards,” Yushuvaev said. “We managed to confirm a class in Thailand, universities and colleges in Israel, United States, Canada, and Germany.

“We also have received requests to translate our tools to other languages,” he said. The GenerateWP team plans to add translations in the near future to open up the site to more international users.