This month we featured a project called VersionPress that brings version control to WordPress, a concept that has many in the community excited. The VersionPress development team is seeking $30,000 in funding by the end of June in order to get it off the ground. However, they aren’t the only ones working on adding git-based version control to WordPress.

Earlier this month, developer Matt Shaw quietly released Revisr on WordPress.org. Revisr is a plugin that allows developers to synchronize with any Git repository and easily commit, push, pull, and branch changes from within the WordPress admin. It’s different from VersionPress in that it’s designed to integrate with a remote repository, ie. one hosted on GitHub or Bitbucket. Unlike VersionPress, which hasn’t yet met its funding goals, Revisr is free and available now.

The plugin allows you to manage your WordPress website with a git repository and currently includes the following features:

“I made Revisr to simplify the development process,” Shaw told the Tavern. “There are currently no plugins on WordPress.org that allow developers or site admins to use all of the main features of Git through the WordPress dashboard, and I made Revisr to do just that,” he said.

“At the same time, I wanted it to be simple enough so it could be used by people who aren’t necessarily interested in Git, but are interested in having backups and being able to quickly revert changes if needed.”

For the sake of user-friendliness, Revisr includes an interface in the admin for committing, reverting, pushing and pulling changes: 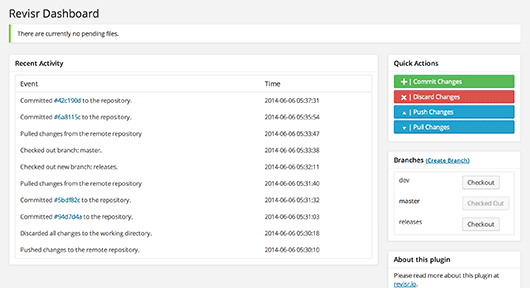 Revisr makes it easy to view changes in files: 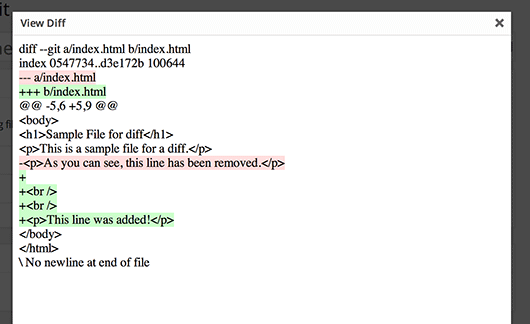 A commit history for the site is available in the WordPress admin: 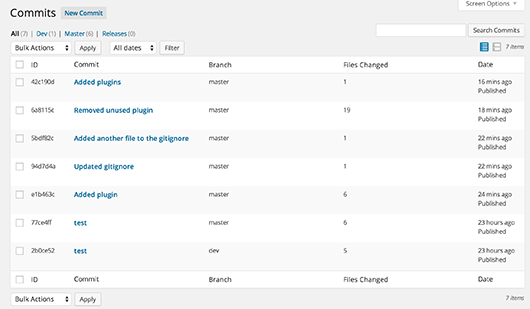 How to Set Up Revisr

The plugin has three requirements:

If you want to use Revisr with an existing site, you must ensure that the “.git” directory is in the root directory of the WordPress installation. The plugin will then attempt to use the settings stored in Git for pushing to/pulling from any remote repositories, which can be defined on the plugin settings page. Revisr supports git through SSH or HTTPS: 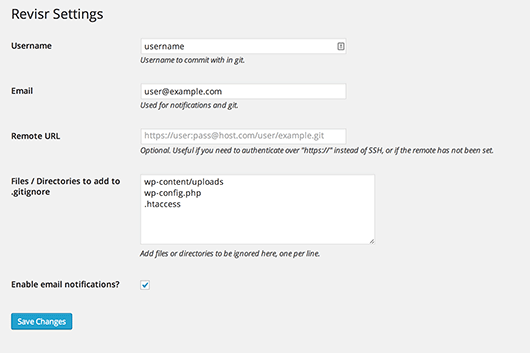 If you’re using SSH for authentication, you will need to generate an SSH key and add it to Bitbucket/Github.

The process for setting up a new installation with Revisr is fairly easy:

Matt Shaw believes that Revisr can benefit WordPerss admins in several ways in addition to revision tracking. “Revisr helps the admins see all files that have been changed and the specific changes within those,” he said. “This is an advantage if many files need to be modified and helps to keep issues at a minimum. An added benefit is having backups and being able to quickly spot and revert some website hacks if they occur.”

“Branching also enables site admins to easily test theme changes or new functionality and quickly toggle back and forth between different versions of the site,” Shaw noted. “For example, a site admin could create a new branch to preview layout changes, and switch back to the original branch and old layout if needed.”

Recent updates to the plugin include the option to keep the database separate between branches. This allows users to go back and restore the database from any commit in which the database was also backed up.

Since Revisr tracks both database and file changes, it is suitable for keeping a complete backup of the site. Site admins can easily make full restore points before major changes such as a WordPress core or plugin upgrade.

The Future of the Revisr Plugin

Shaw is working with a team that aims to launch Revisr Pro, a paid application, later this year. Revisr Pro will work with any type of project, but it will also be able to interface with the Revisr plugin via an API to add more features to both the plugin and the standalone application. “It’s designed to simplify managing large amounts of websites (20+) with multiple environments, with file and database tracking with Git, project-level tasks, and team support,” Shaw said. “Revisr Pro is also able to deploy and configure new projects, simplifying the workflow for teams using Git, and allowing more time to be spent focused on the project itself.” They plan to feature straightforward pricing, and won’t charge for additional users or projects.

Shaw is currently the sole developer on the Revisr WordPress plugin project, although he has friends who are helping out with testing and design. His plugin is different from VersionPress in that it isn’t targeted toward bringing version control to the masses. Revisr is geared more toward developers and isn’t supported by a crowd-funding campaign. Shaw is just one man working to create a plugin that helps improve his own workflow. You can download Revisr on WordPress.org and watch for updates as the plugin continues to develop.