In a post titled “Open Source Has Won,” EllisLab founder Rick Ellis explained why ExpressionEngine is going open source after 16 years. The content management system is an evolution of the pMachine blogging software first released in early 2002. EllisLab previously required a license fee to use the full version of ExpressionEngine, which is built on object-oriented PHP and uses MySQL for storage.

“Although open source was a viable licensing model when we launched our first CMS back in 2002, it was not apparent then just how dominant open source would become on the web,” Ellis said. “It wasn’t until Eric Raymond wrote The Cathedral & The Bazaar that open source would even begin to enter the general public’s consciousness. Since then we’ve watched the open source market grow rapidly and continuously.

“Today, over 90% of the CMS market is open source. In fact, it’s nearly the de-facto license model for all-things web. Stunningly, the market is expected to triple in revenue within the next five to ten years, and it’s estimated that over 70% of businesses worldwide rely on open-source software. To say that the internet is open source would not be an exaggeration. It’s that dominant.”

Ellis said he had wanted to migrate to an open source license for a long time but had not yet found “the right strategic and financial partner to enable the full vision of what we hope to achieve.” The first part of EllisLab’s business plan is to build a successful services model and then branch out from there.

Prior to licensing ExpressionEngine under the Apache License, Version 2.0, EllisLab’s commercial license imposed severe restrictions on what users could do with the software. Users were not permitted to do any of the following:

Additional stipulations encouraged users not to share code by keeping their repositories private, and to make sure they were paying for commercial licenses if they were being paid for their work. 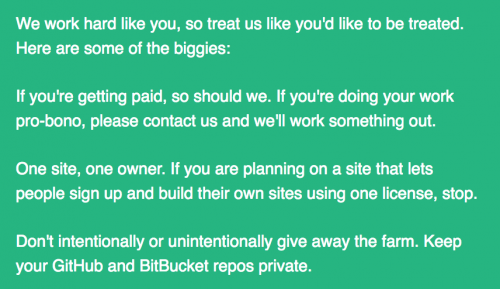 There was simply no way ExpressionEngine could capture any significant amount of market share with this kind of restrictive licensing and its usage has steadily declined over the years. It is currently used by 0.3% of all the websites whose content management system w3techs can detect. By this or any other measure of market share, ExpressionEngine stands as a sobering monument to the importance of giving a project a license that empowers its community to continue adding wood to the fire.

“The community is mostly gone at this point and I don’t even think its related to them charging for the software but they just stopped responding people and helping them in their forums,” reddit user @netzvolk commented on the news.

“I have paid EE multiple times in the past but considered NOT paying anymore because third party developers are gone, the community members are gone, the tutorials and books are gone….EE 2 was the best version so far. Moving to yearly releases also caused more harm than good in terms of building a stable ecosystem around the product.”

ExpressionEngine’s new open source licensing is a major win for its remaining users. How much further down the road would the software be if the decision was made years ago? There’s no way to know, but moving forward users will have more input and influence over the future of the software.

“I suspect open sourcing EE is an approach to get that community and developers back,” @netzvolk said. “EllisLab can still make money with consulting, support and add-ons.

“But all those suffer if nobody is using the product anymore. This is more about expanding reach to stay afloat than anything else because some of their past bad decisions are what created alternatives like Craft. EllisLab turned an amazing product into a forgotten one in just a few years. I hope this means some change, and maybe, maybe one day the old developers and hard core EE community members come back.”

Users can only speculate on why EllisLab is making this move after 16 years of keeping its software locked down under restrictive licensing, but Ellis makes it clear in his post that the market decided long ago.

“Open source has won,” Ellis said. “It’s not even a contest anymore.”