Cultivating a Culture of Respect in the WordPress Community

The WordPress project is going through some growing pains. After 10 years there are millions of people around the world using this software and interacting with one another on a daily basis. The vast majority of these interactions are positive and respectful and for a long time we haven’t needed any kind of official code of conduct, but this is changing.

“Women in WordPress” is currently a hot button topic and has been for years, with many discussions centered around how to make women feel more welcome.

A few incidents of harassment have popped up in our community and other open source communities, prompting a movement to create a Code of Conduct or set of Community Expectations. Jen Mylo is currently heading up the Community Expectations team that will create a first draft for everyone to review and send feedback on. In the meantime, how can the community handle situations on the front lines at WordCamps or other events where people are gathering?

Do We Need A Safety Officer At WordCamps?

Stephanie Leary posted on the Women of WordPress site concerning harassment at WordCamps after speaking with a couple of people who experienced minor harassments at events but hadn’t reported it. She suggests that WordPress create its own harassment policy and that WordCamp organizers designate a safety officer:

Once we get to the after parties, the badges come off and the drunken propositions begin. It’s difficult to remember at that point who’s an organizer and who isn’t. Someone on the WordCamp staff needs to be designated as a Safety officer, and that person needs to be introduced at the opening remarks so everyone knows who it is. That person’s contact information needs to be on the Camp website so people can get in touch with him or her when needed.

The question that naturally follows is: What should the safety officer or WordCamp organizer do if someone reports harassment at a WordCamp? Should they be expected to police attendee behavior off-site?

Even if these officers are in place, will WordCampers report incidents of harassment? What happens from there? If the expectation to handle these situations is placed on WordCamp organizers, they will need training for how to respond in different scenarios. Hopefully procedures will be included in the Community Expectations for how conference staff should respond to reports of harassment.

When I first started blogging I often received many unprofessional comments on my posts that had nothing to do with the content. I have been harassed in live chat support sessions and on Twitter, but those things rarely happen anymore. These issues have improved over the past five years that I’ve been involved with WordPress.

Unfortunately, I was harassed at my very first WordCamp by an attendee at an after-party. He was heavily pressuring me to go to his hotel room with him and used some crude phrases not fit for print, mixed in with: “C’mon, I know you want to f*** me.”, “Your husband doesn’t have to know.” and “You know you want it.”

How could the conversation degrade so quickly from building websites to sexually explicit advances? I politely refused several times so as not to make a scene and then the conversation was dead. He apologized the next morning right before I was scheduled to speak in the BuddyPress track.

As someone who is not a natural public speaker, I was already very nervous about my presentation. In my mind I was thinking, “These developers know EVERYTHING about WordPress and BuddyPress. What am I even doing here?” But on top of that I was nervous that I might see in the audience the face of that guy who had just completely objectified me the night before. Being seen as an object compounded my existing lack of self-confidence and made me feel like a total fraud. I wanted to disappear.

Everyone I spoke to about it afterwards told me there was nothing to be done and to just forget about it. They meant well.

At the time I agreed that there was nothing to be done. The reality is that there was no code of conduct, no expectations for after-party behavior, no boundaries set by the organizers, through no fault of their own. But even if there had been a safety officer, I don’t know if I would have reported it. I certainly didn’t want anyone to lose his job over a mistake for which he apologized.

There are a lot of reasons why women and men choose to stay silent and not report these experiences, a few of which include:

Even with a code of conduct in place and a safety officer on hand, it is often difficult for victims of harassment to find a good reason to report these kinds of incidents, especially if nothing technically criminal took place. It’s not an easy problem to solve. To truly change behavior we need to look deeper at fostering a culture of respect.

Creating A Culture of Respect

Community can make or break a project. A set of community expectations is the first step in laying a foundation for respectful behavior. I wish we didn’t need them, but we do. WordCamp-specific community expectations would also be helpful for communicating those values within the context of that event. Though there are many differing opinions about a WordCamp organizer’s responsibilities to attendees and speakers, I think we can all agree on doing more to highlight respect as one of our chief values.

Respect means holding each other in high esteem and honoring each other. Giving and receiving respect isn’t something that anyone wants to have to enforce. Nobody is fond of excessive rules and regulations. It’s something that needs to be part of our culture. The underlying idea is to always approach people with the attitude of “I respect you and I appreciate that you’re here,” whether that’s in the forums, on Twitter, in IRC, or at WordCamps.

Respect is a learned behavior. When new people see it modeled they are more likely to perceive it as a cultural value that we hold. We need to learn to give it unconditionally. There shouldn’t be any “If you respect me, then I will respect you.” But rather, the idea is that we respect people. Period. Not because of anything they’ve achieved or created or because they know how to spell WordPress with the camel case. Sometimes people are new and they are still learning. That applies to behavior, too. People aren’t born knowing how to be respectful at a WordCamp so we need to articulate what that means for us.

How does this translate practically when it comes to harassment?

I propose the following for WordCamps: 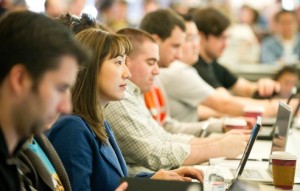 I think this is a good starting point for helping attendees and speakers feel more comfortable about attending WordPress-related events. If you’re one of those who wants more diversity and wants to see more women speakers at WordCamps, then creating a code of conduct for your event might be a big help. Andrea Middleton said that the first WordCamp she was aware of having a code of conduct was WordCamp SF 2011. The code of conduct for that event was inspired by the OSBridge Conference and provides a good starting place for event organizers to use in setting expectations for community behavior.

It’s important to note that incidents like this are not representative of the WordPress community as a whole. I have rarely encountered finer, more generous people than those I’ve met through WordPress. Our community is full of kind, polite, welcoming and friendly people. In most of these minor incidents, it happens because someone didn’t know our unwritten code of conduct. (Or because somebody got wasted.) We can do a better job of communicating that at events.

In the end, at WordCamps we all just want to laugh and enjoy our time learning from each other. There’s no way for WordCamp organizers to guarantee attendees and speakers that nobody will harass you or make you feel unwelcome. Embracing the risk of interacting with other human beings is part of being an adult. Organizers can, however, better educate themselves about what procedures they can follow if harassment is reported. Ultimately, they may not be able to do too much more than ask the person to leave, but the message will be loud and clear:

In the WordPress community we treat each other with respect.