Earlier this year, Automattic’s Toni Schneider asked Gravatar users what platform should be first to receive the Gravatar mobile app. No details on the purpose of the Gravatar app were revealed at the time but it turns out that the team has been busy developing a photo app.

While working on the Gravatar app, they realized that people don’t want to change their gravatars every day, so they decided to put their efforts toward an app that is likely to be used more often. According to Schneider, the planned Gravatar app “morphed into a Selfies app,” which is now available for Android featuring the tagline “Put Your Selfie Out There.”

We noticed that taking pictures of ourselves to update our Gravatars was something we only wanted to do every month or so, but then we started taking selfies and sharing them with each other and that became a daily and very fun habit. So our Gravatar app morphed into a Selfies app, and it’s now ready for the world to play with!

The app was not built using the WordPress API or the WordPress.com API but is powered by a yet-to-be released Gravatar API, according to Automattic employee Marcus Kazmierczak.

For those who don’t have an Android device, the Selfie app opens with an invitation to take a selfie, which you can then filter and share to a public stream. 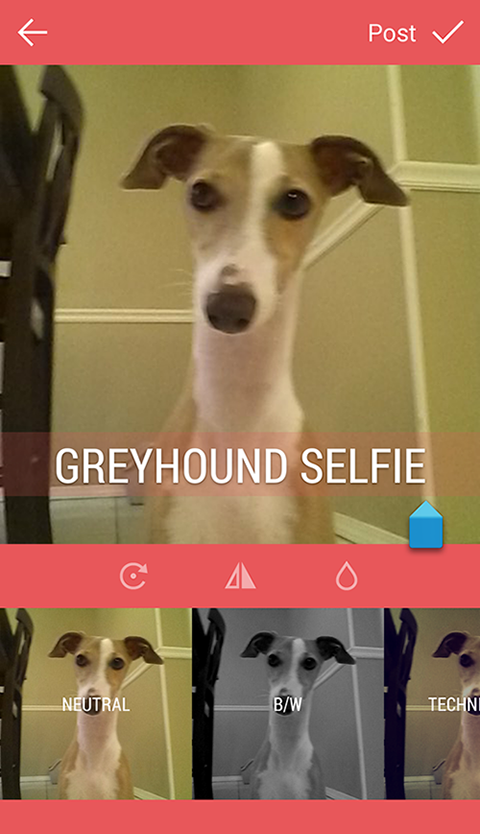 Users can authenticate via Google in order to easily create an account. The Selfie app has a social aspect built in that allows users to post reactions as a caption or photo response, designed to create “mini stories.”

The release post, titled “Something Funny Happened” gives the impression that creation of the Selfies app was something akin to a happy accident. Automattic says the app is still in its infancy and has not yet confirmed when the intended Gravatar app will be available. Reaction has been mixed. While some see it as an interesting experiment on mobile, others wonder why Automattic is using its highly skilled talent to “democratize selfies.”

Selfies is an interesting choice for Automattic to release, as their app experiments are usually tightly integrated with its core products and services or built to showcase WordPress as an application framework. From the sidelines, this app appears to do neither, although it certainly has the fun factor built in. If you want to test the Selfies app, you can download it from Google Play and leave feedback on the app’s P2 blog.