Would Anyone Be Interested in a WordCamp Badges Plugin? 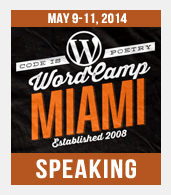 Wordcamp Miami Badges is a new plugin in the WordPress directory today. It allows speakers, attendees and volunteers to easily display badges indicating their participation in the 2014 event, which is estimated to surpass 700 this year.

The badges plugin was created by Myles McNamara, a self-described “geek who loves open source, writing code, and helping others out.” After searching the directory for a plugin that would display an event-specific WordCamp badge, he couldn’t find a suitable option and was inspired to create a new plugin. WordCamp Miami Badges makes it easy to place a badge on your website using a configurable shortcode or widget.

The Possibility of a Generic WordCamp Badges Plugin

I got in touch with McNamara to find out how difficult it would be for other WordCamp organizers to adapt the plugin for their own events. He said that it’s possible to restructure it for use as a generic WordCamp badges plugin. “As of right now this will only work for the Miami one as I hard coded the images into the plugin, but it would be very easy to add an option for the user to specify the image, or even just set it as a variable in one of the files that others could change to what they want,” he said.

McNamara has a few ideas for enhancements to the plugin that he’d like to add, if there’s enough interest in converting this beta version into a widespread WordCamp plugin:

McNamara contributes to a number of open source projects on Github, including ownCloud and the Pods Framework for WordPress. If he gets enough interest in a generic WordCamp badges plugin, he’d be happy to adapt the WordCamp Miami plugin for broader use. If you’d like to get involved, you can contribute code and localizations to the plugin via GitHub.

What do you think? Would a WordCamp Badges plugin be useful for promoting events? Do you like McNamara’s list of proposed enhancements? Or is it just as easy to upload a badge to your website?

17 responses to “Would Anyone Be Interested in a WordCamp Badges Plugin?”