The WordPress Theme Review team (TRT) has turned a corner and is approaching a major milestone of getting the review queue under 100 themes. As of today, 189 themes are lined up in what was previously a 1,000+ backlog. Key reviewers are confident that number will be closer to zero in the near future.

Emil Uzelac, one of the key reviewers, shared the ticketgraph for the backlog on Twitter today, demonstrating that the team is in a better place where new theme submission isn’t causing overload issues as it did before. Themes continue to flow in but are not significantly affecting the queue. 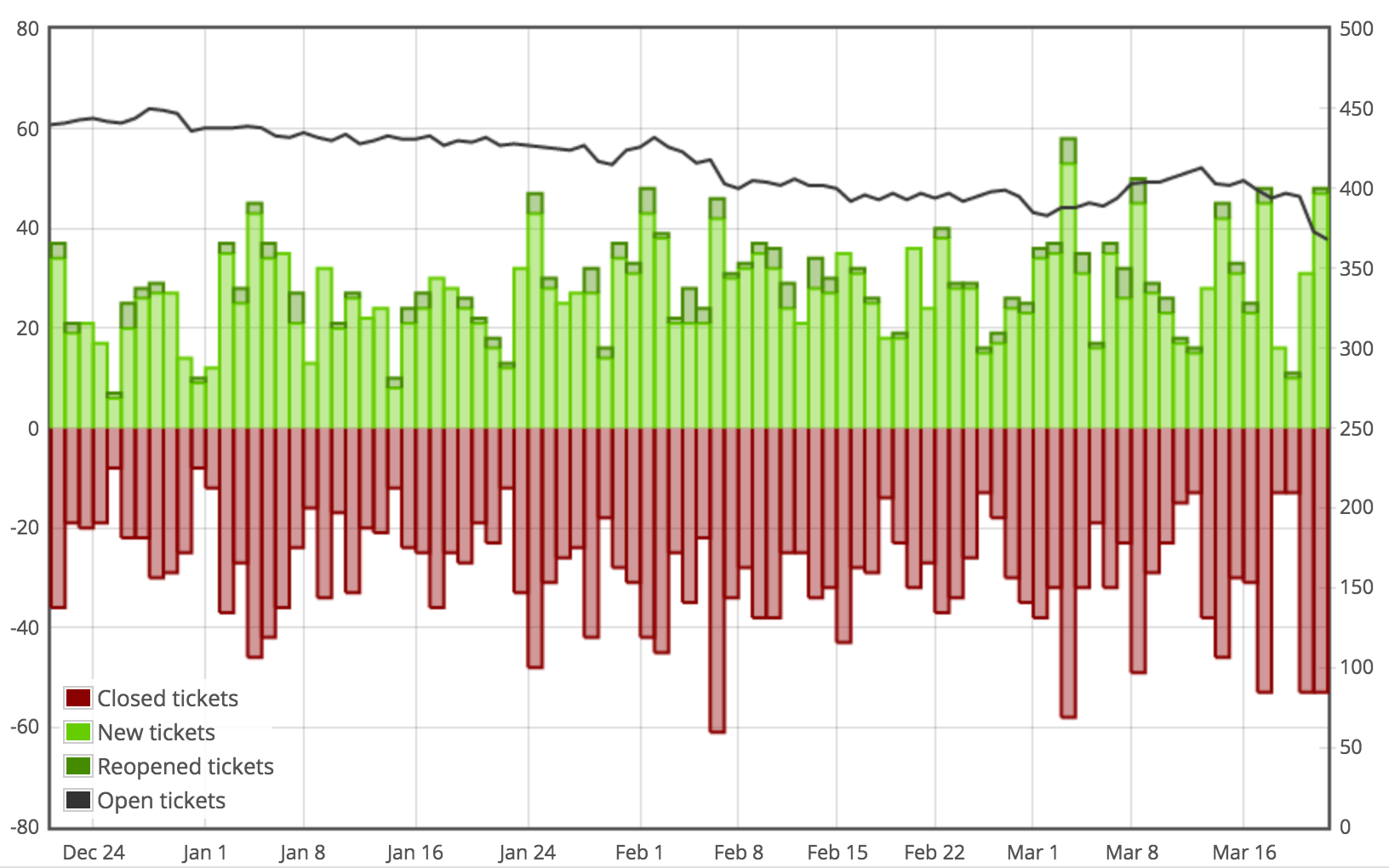 In 2015 the TRT hit a wall with an influx of themes flooding into a legacy review system that wasn’t working. The team couldn’t keep up and was forced to spend much of 2016 changing the review process to better handle the large number of themes coming in. The TRT is working hard to make 2017 the year they get back on track.

Uzelac identified a few of the measures that have helped in taming the queue:

“Around Christmas was when many on the team started seeing a tiny sliver of light at the end of a long tunnel,” Key Reviewer Justin Tadlock said. “In the past few days, seeing the queue get below 200 themes has been a high point. Folks on the team are excited because our ideas are paying off.”

Tadlock can’t say when exactly the team turned a corner but describes it as more of an iterative process that started with small ideas they could implement themselves. This has significantly reduced the wait time from 7 or 8 months a year ago to two months today. Themes also go through an admin queue that adds a bit to the review time but Tadlock said they hope to tackle that in the next Review Shindig, which happens on the first weekend of every month.

“That number is shrinking,” Tadlock said. “By the end of April, we could be looking at 3-4 weeks. I’m a bit optimistic, so don’t hold me to that. It could be May or June in reality.”

Tadlock said once the team gets to the 50-100 range they will be at the place where they’re really only handling new themes that are coming in, instead of working the backlog. Once they reach that milestone, they will be able to more accurately track how long it takes for a theme to make it through the review process.

“That’s where we’ll need to really start refining the process so that it works even better in the future,” Tadlock said. “A well-coded theme could potentially make it through the process in 2 months right now. Another theme might be 4-5 months. There are a lot of factors to consider. It’s my hope that we eliminate many of those factors that are holding up the process.”

The new rule that limited authors to submitting one theme at a time has had a significant impact on cutting down the queue. The rule was meant to be temporary and will be up for reevaluation when the queue is under 100 themes. Tadlock said the team will likely pull the rule, but it has been instrumental in rooting out copies that contained only minor changes to the original.

“For most authors, this [rule] is not a huge problem,” Tadlock said. “It definitely hurts a few of the more prolific authors in the short term. However, it helps stop the flow of theme companies who are just copying/pasting the same theme with minor changes. We’ve had theme companies with as many as 17 themes in the queue that were just copies. This new rule has helped us find those and put a stop to the practice.” The team was able to track down an entire ring of theme authors with multiple accounts with dozens and dozens of themes.

Tadlock said most of the issues the team deals with in reviews are related to security. The content portability issues that were highlighted in the recent Zerif Lite suspension are more uncommon.

“The ‘draconian stuff’ people talk about probably represents 1% of the issue,” Tadlock said, referencing Matt Mullenweg’s recent comments on the current requirements. “99% of the issues are the things people don’t talk about.” Tadlock has been speaking with theme authors about how they can “create” content within the guidelines, as there are ways to do it that are both future-proof and portable.

The team is currently spending a lot of time reviewing code that shouldn’t need to be manually reviewed. The next item on the TRT roadmap is incorporating better automation into the review process.

“The big thing we’re working on now is the new Theme Check plugin,” Tadlock said. “It’s going to solve lots of problems. It’s based off the code sniffer (PHPCS, I believe). It’ll help theme authors start submitting better coded and more secure themes right off the bat. Humans easily miss those things looking through it with their eyes. This will definitely make theme authors better coders and users will have even more secure themes. Then, we can focus on those 1% issues.”