The Spanish WordPress community hit a remarkable milestone with translations this week. Polyglots volunteers have now translated the meta sites, WordPress apps, and the top 200 plugins at 100% completion, with no pending translations to review.

The size of the team is a major factor in reaching this milestone. According to stats Naoko Takano shared at WordPress Translation Day 4 last month, Spanish is the locale with the most translation contributors (2,863), followed by German (2,399), Italian (2,190), Dutch (1,584), and Russian (1,515). It is also one of the top non-English locales installed, with 5.0% of all WordPress sites using the translation. WordPress.com reports similar numbers, where Spanish is the second most popular language for blogs at 4.7%.

Rocío Valdivia, a Community Wrangler at WordCamp Central who lives in Spain, gave us a look at what is behind the team’s extraordinary growth and momentum. She identified several key factors that have contributed to their success in working efficiently and sharing useful information among team members during the past 2-3 years.

“We created a Slack instance some years ago, but at the beginning it was common for people to join and ask for support questions,” Valdivia said. “Now we have some protocols: the general channel is an only-read channel. If someone ask for support, we send them with a kind predef to the es.wordpress.org forums, where they get answers in a few hours. There are no questions in the forums waiting for longer than six hours ever, as we have a very active support team that coordinates in the #support channel of our Slack.”

“Besides all of this, we’ve worked very well passing the philosophy of the project to the new members from the most experienced ones,” Valdivia said. “For example, people do very soft transitions from one lead organizer to the next one.”

Although the Spanish community has experienced contributors across several WordPress.org teams, such as WPTV, Community, Support, and Polyglots, Valdivia said they are a bit thin on Core contributors.

“We’re lacking people with experience contributing frequently to Core,” Valdivia said. “We have some of them who have contributed several times, but still need more people with more involvement to be able to pass all this info to newcomers.”

Strong local meetups are another factor in the Spanish community’s success at keeping translations up-to-date. In addition to the largest team of translators in the world of WordPress, Spain has the second highest number of meetup groups and events per month. Spain is running 64 local meetups, with a population of 46 million people, compared to 201 groups in the U.S., which has 7x the population size (327 million). 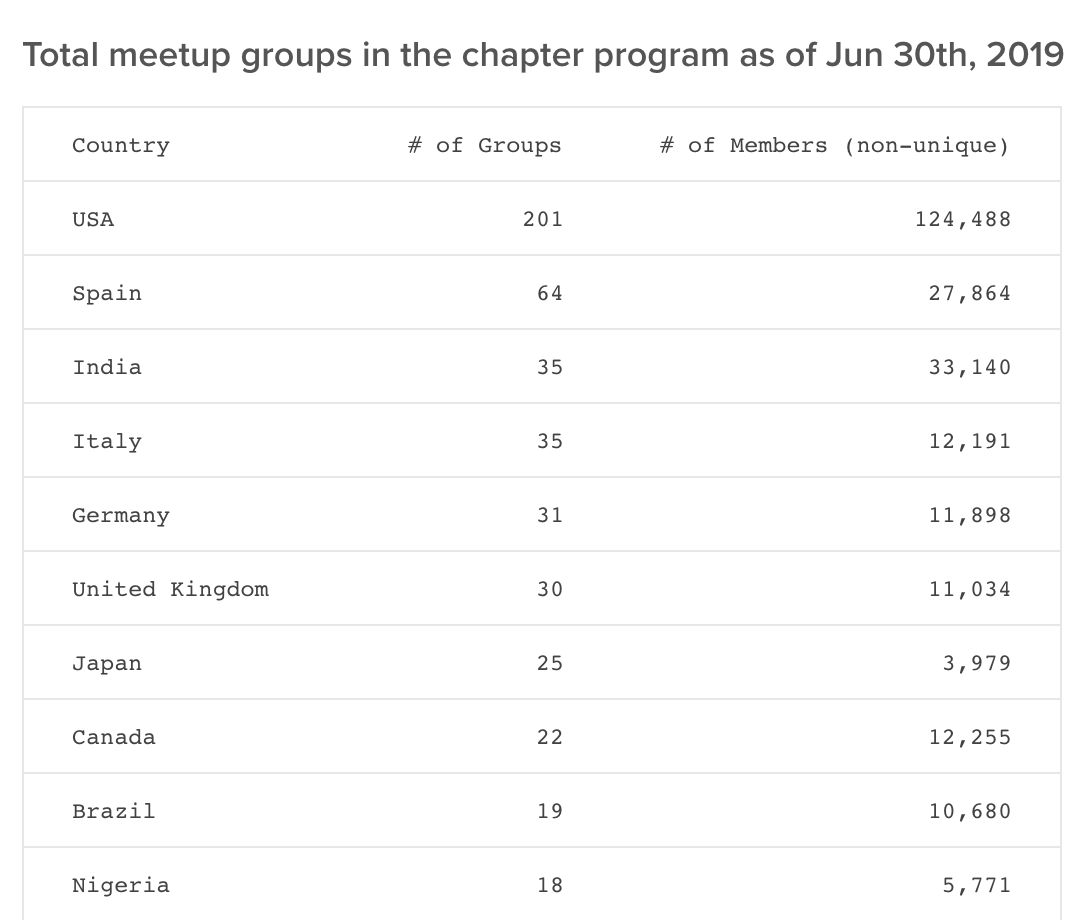 “The language barrier has been an issue for years, as not everyone speaks English and not everyone feels confident following conversations in English,” Valdivia said. “So, being able to train our own teams of contributors in our own language and having our own shared resources and channels, has been very useful.”