BruteProtect, the cloud-powered brute force attack prevention service that we wrote about back in July of 2013 has successfully closed a seed round of venture capital funding with a private angel investor in California. Jesse Friedman who previously worked for Astonish, has been hired on as the director of innovation. BruteProtect is looking to hire two more developers and currently has major updates scheduled to occur in April.

What BruteProtect Plans To Do With The Funding

When I asked Sam Hotchkiss what he plans on doing with the funding, he told me that they want to hire additional personnel to focus on fulfilling the vision he has for the software. What once was a side project is now the main focus of a dedicated team. I found it surprising that something as simple as BruteProtect would be successful to the point of receiving venture capital funding. Sam however, was not surprised.

I’m not at all surprised at the success we’ve had with BruteProtect so far. It’s a drop-dead simple to install plugin that provides the most comprehensive solution to the growing problem of distributed brute force attacks. It’s pretty incredible what a large problem this is. We’ve identified over 2 million infected machines that are a part of a distributed botnet and have blocked over 41 million attacks now. That number is growing by over 1 million a day on average at this point.

BruteProtect Is Just The Beginning

BruteProtect is sort of like Akismet, but for the WordPress login page. It tracks failed logins across a large number of WordPress sites, then analyzes that data to find patterns and identify attack bots. The more sites using the service, the more data they have to work with. Sam believes that BruteProtect is just the tip of the iceberg. To that end, Jesse and Sam have created a new parent company called Parka, LLC with the goal to allow websites to work together to solve problems.

Sam and his wife have purchased a camper and will be traveling the United States of America stopping at numerous WordCamps along the way. Check out the license plate that will be on the bumper of their new camper. 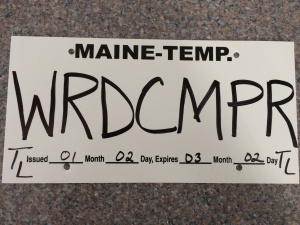 Here is a tentative list of upcoming WordCamps that Sam and his wife are planning to visit.

You can follow their adventure via WordCamper.com. While the domain currently violates the WordCamp trademark, Sam says they are in the process of changing the domain and will redirect it to its new home. If you see their license plate while driving, be sure to give them a friendly wave!