If you visit the plugin directory, you will notice a new section at the top featuring block-enabled plugins. WordPress 5.0 has been downloaded more than 8 million times, just one week after its release, and users are looking for blocks to extend the new editing experience. WordPress.org is highlighting plugins to push the block ecosystem forward and will soon be doing the same for themes. 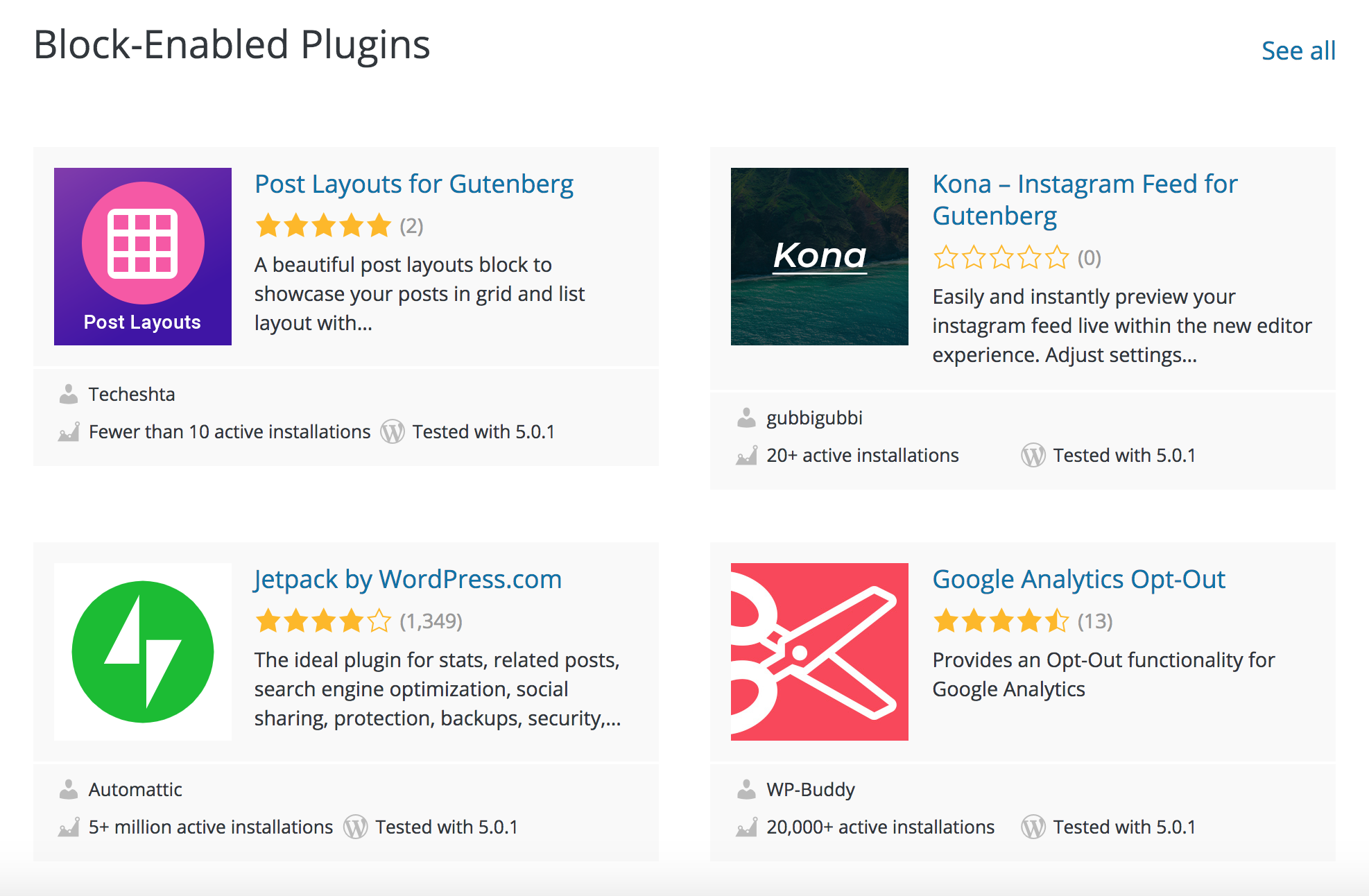 There are currently 94 blocks in the featured section. In a post on make.wordpress.org/plugins, Samuel (Otto) Wood invited developers to email the plugins team at plugins@wordpress.org if they have a block-enabled plugin that they want to be included. The basic requirements are a plugin that introduces or improves blocks.

I asked Otto how they select from submissions. He said the plugins team is curating the list manually and adding those they think are good or interesting.

“It’s not a high bar; if it has a neat block, we’ll add it for now,” Otto said. “We may raise the bar depending on how big the section gets, and the section is not final by any means. We’ll change the inclusions according to how it works out. The goal is to promote neat and cool integrations, but there aren’t a lot of those yet. It’s new.”

Assigning a tag to block-enabled plugins that authors could opt into would eliminate the need for manual approval on the section, but Otto said they are currently handling it more like a showcase.

“Letting the plugin authors just add a tag would reduce the available tags (it’s already limited to 5) as well as reducing the value of curation,” Otto said. “We may change that as well in the future, somehow. Nothing is set in stone right now, we just want to see people making cool blocks and see what happens with that.”

A directory devoted entirely to blocks may also be coming to WordPress.org next year. In a recent post, Matt Mullenweg identified 9 Projects for 2019, including “building a WordPress.org directory for discovering blocks, and a way to seamlessly install them.” This is a much larger task and requires WordPress to answer a few questions: Will plugins continue to be the primary delivery mechanism for blocks? Or will WordPress.org implement a system where users can download JS-only blocks, similar to the Gutenberg Cloud project?

Three months ago, Otto commented on a post about Gutenberg Cloud, saying that js-only blocks are likely only suited to frontend enhancements.

“I remain unconvinced that js-only blocks have a place which is meaningful other than the trivial layout based things that blocks can do,” Otto said. “Yes, you can build great looking blocks with JavaScript only, and since it’s an editor, that is a really big deal. But without any actual support on the backend to ‘do stuff of substance,’ it is just visual glitter.”

Offering JS-only blocks through WordPress.org might also complicate block discovery if users don’t know whether to look for blocks in a plugin or via the JS-only block delivery system. There are a lot of unknowns in the block era that will require WordPress to make some decisions. Meanwhile, the ecosystem of block-enabled plugins will continue expanding as more users adopt the new editor and especially as widgets and menus are ported to blocks in phase 2 of the Gutenberg project.