WordPress for Android Version 3.9 Adds Two-Factor Authentication and Improvements to the Media Library 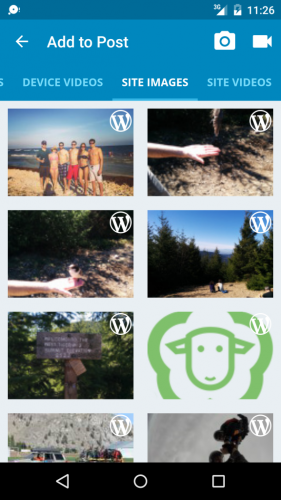 The mobile developers behind WordPress for Android released version 3.9 today on Google Play. The app now supports two-factor authentication without the need for application passwords. In the past, WordPress mobile apps required an extra step wherein you would generate a unique password for the app on each of your mobile devices. This release eliminates that extra requirement.

One of the most visible new features in 3.9 is the improved experience of adding media from your device to your site’s media library. Previously, adding media required a couple extra clicks to navigate to the correct screen for capturing a photo/video or selecting from the mobile device’s gallery.

The new media screen includes new buttons at the top that allow you to capture a photo or video with your device. It also displays all of your media sources from one location, a major improvement that makes adding media faster and more convenient.

Also new in 3.9 is a language selector specific to the app, which currently supports 32 different languages for publishing.

The release post credits 11 different people for their contributions to 3.9. Development for the 4.0 milestone is already underway on GitHub.

Android users who are eager to update to the latest version may need to wait a few hours. According to contributor Tony Rankin, the update was moved to production today and can take awhile to fully propagate. Users can expect the 3.9 update to hit their devices within 24 hours.

One response to “WordPress for Android Version 3.9 Adds Two-Factor Authentication and Improvements to the Media Library”