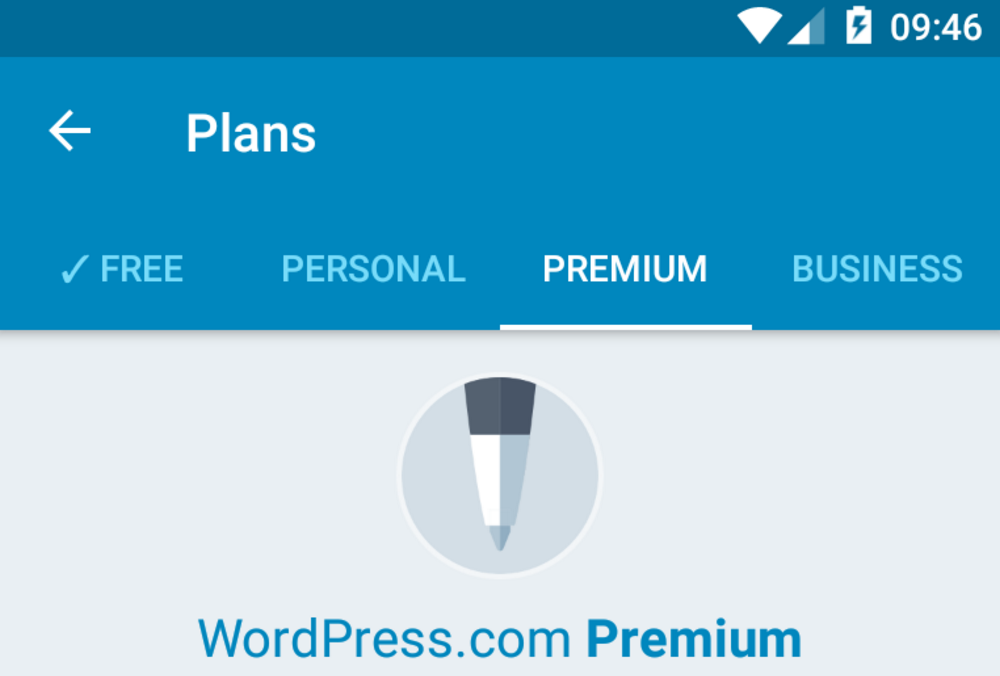 WordPress for Android version 5.7 was released today with a new “Plan” screen under the site menu for WordPress.com users. This section details the differences between WordPress.com’s commercial plans and includes a link for users to manage and upgrade their plans.

Previous releases have added user management and the ability to invite new users. Version 5.7 builds on this and allows WordPress.com users to manage their followers and viewers from the the “People Management” screen.

If you use the mobile app to manage self-hosted WordPress sites, you may have noticed the lack of functionality as compared to WordPress.com sites. The app doesn’t allow self-hosted site owners to manage themes, site settings, or users. This gap is becoming more pronounced with each release.

Why Self-Hosted WordPress Sites are Lagging in Features Compared to WordPress.com Sites

I spoke with Maxime Biais, one of Automattic’s mobile engineers, to find out why the app seems to be charging forward with new features for WordPress.com users and leaving self-hosted users behind.

“‘People’ is on the roadmap for self-hosted sites, but we are waiting for some changes in WordPress (core) before we can implement anything,” Biais said. “That might take some time if we wait for the WP-API plugin to be merged in core.

“For ‘Themes,’ there are other issues with browsing (and installation) and we’re not excluding it but it’s not really on the roadmap.”

As the fate of the WP REST API project is still up in the air, it’s difficult to gauge when self-hosted sites will have feature parity with WordPress.com. In the meantime, the app’s engineers are working on getting more features in for sites that have Jetpack enabled.

“User management will be enabled for Jetpack sites (and other features too),” Biais said. “We’re currently rewriting the network layer of the app and this will bring good stuff for our Jetpack users.”

Biais said that the network layer rewrite is a large task that will come with some major infrastructure changes in the app. He could not provide an ETA but said they are aiming to have the first steps of this new network layer integration completed by the end of this year.

Automattic’s WordPress for Android team includes approximately 10 developers, some of which are working on iOS and other apps like Simplenote. I asked Biais how the team decides on the roadmap and goals for the app.

“For the roadmap, it’s variable, we usually decide by consensus,” he said. “We’re also looking at users’ feedback and decide to work on some features when we see a trend. For instance, we’ve seen more and more sign in errors and we decided to work on a better tool to detect the xmlrpc endpoint and a ‘sign in by email’ feature for WordPress.com users.”

WordPress for Android is an open source project that is open to contribution, but Biais said the team rarely receives any contributions due to the complexity of the app.

“Code complexity doesn’t help and the fact we support different APIs (WP.com REST API, XMLRPC, and soon WP-API) makes things even harder for a contributor,” he said. “This new network layer will hide that complexity and makes things easier but I’m not expecting many more contributions.”

Self-hosted WordPress users who don’t appreciate the proliferation of WordPress.com-only features packaged with the app, such as the reader and the commercial upgrade path, have no other option than to fork it. There is no way to turn off the non-publishing-related features that Automattic’s employees are building into the app.

I asked Biais what percentage of the app’s maintenance and development is devoted to WordPress.com features, as opposed to the overall improvement for all users.

“It’s hard to say, some features take most of the time – the editor for instance – and benefit WordPress.com and self-hosted users,” Biais said. “Other features are specific to WordPress.com: Reader / Notifications.

“Some features take much more time for self hosted sites: the sign in screen, for instance, and the network layer to support all kinds of self hosted installs (self-signed SSL, HTTP auth, misconfiguration, PHP warnings, etc.”

When asked whether the commitment to support self-hosted sites is the same as WordPress.com sites, Biais clarified the team’s approach when a feature is not available for both.

Biais cited the Site Settings feature as a good example of this. It’s currently a WordPress.com-only feature. Although the code for self-hosted sites is ready, he said it is not yet wired into the app because the team is waiting on a certain ticket in core to be fixed.

I asked Biais if there was a trend of users who wanted the open source WordPress app made purely for features shared by both WordPress.com and self-hosted users, if the team would consider removing features like the Reader.

“If it was a majority of users, I guess we would think about doing it,” Biais said. “Or maybe find a way to build a special version with only features shared by WordPress.com and self-hosted users. That’s doable but it’s a big task.”

Biais said they have only once had this request from the manager of FDroid, a catalog of free and open source software apps for Android. Otherwise, the team has not received much feedback from users wanting major changes to the app.

As the app contains many WordPress.com features that are not central to the core publishing experience, some have suggested that it be renamed “WordPress.com for Android” for clarity. According to Biais, the team has examined the possibility of splitting it into two apps.

For now, self-hosted users should recognize that issues with WordPress core and the lack of the WP REST API in core are holding the app back from offering the same features that WordPress.com site owners enjoy. Jetpack-connected sites should see more features once the network layer rewrite is in place. The team has a roadmap that includes user management and site settings for self-hosted sites, but users will need to wait for future releases of WordPress to make it possible.

One response to “WordPress for Android 5.7 Adds Path to Upgrade WordPress.com Plan”