WordPress for Android 3.3 Released, Features Improvements to the Reader 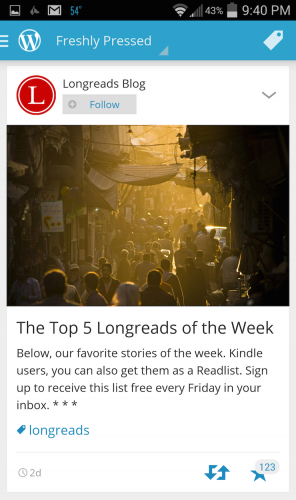 WordPress for Android 3.3 was released last week. A majority of the improvements found in this release center around enhancing WordPress.com’s built-in Reader.

Android users will find a few changes in the app but nothing that would effect the normal publishing workflow:

Version 3.3 was essentially a janitorial release with fixes for bugs that users found to be annoying. The following items have been patched up:

If you don’t utilize WordPress.com features when publishing with the app, then you’re not likely to be impacted by the improvements in 3.3. The 3.4 milestone, however, hints at the possibility of improvements to the media/themes grid layout and some important fixes for uploads. The planned enhancements will improve the experience of publishing media through the app.

The WP for Android app team is always looking for more beta testers. If you want to join the beta testing program, you’ll get access to new features and improvements in progress, and you will have an opportunity to offer feedback on the app’s development. Sign up on the app’s dedicated Google+ community page.

One response to “WordPress for Android 3.3 Released, Features Improvements to the Reader”