WordPress.com Developer Site Gets a Fresh Look and Updated Documentation

WordPress.com has relaunched its Developer Site with a new focus on making information easier to find for third-party developers. The site is now sporting a modernized design with a call to action that goes straight to the newly updated documentation, outlining how to get started creating apps for WordPress.com. 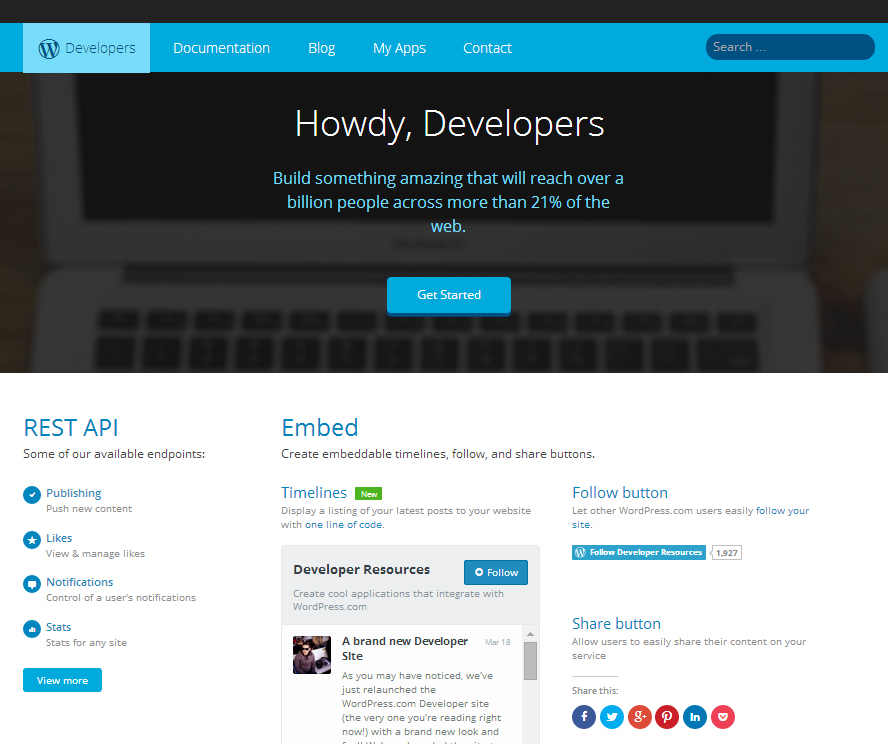 I spoke with Automattic employee Joey Kudish who said that there are actually 27,000 apps currently registered on WordPress.com. “A large handful of those are test or development-only applications,” Kudish said, but that gives you an idea of how many developers are looking to integrate with WordPress.com. Many commonly-used applications have partnered with them to integrate data, including Facebook, Twitter, Google+, Pocket, Pinterest, IFFFT, Mixcloud, Soundcloud, and others.

Developers who want to integrate with WordPress.com can do so via its REST API, which provides endpoints for tapping into Publishing, Stats, Likes, Notifications, Insights, Reader and more. The docs include query parameters and an example query/response for each endpoint.

In addition to the updated REST API documentation, a few extra highlights from the docs include:

Sharing Button Creation:
Developers can find information on adding new buttons to WordPress.com’s Sharing buttons. If you have a service that is not currently supported, there is a step-by-step guide for triggering the service creation process for a user.

Embedded Timelines:
The site includes a dedicated page for helping users create embeddable timelines. The timeline generator gives you a single line of code for displaying recent posts on any site. It works for both WordPress.com blogs and Jetpack blogs with the JSON API feature enabled.

Theme Guide:
Theme developers who are interested in building for WordPress.com will be delighted to discover the newly-designed Theme Guide, which includes information on escaping data, internationalization, queries, how to properly enqueue scripts and styles, data portability and everything else you need to know about developing a theme to meet WordPress.com standards.

Automattic is Putting a Higher Priority on Developer Resources

With the new @AutomatticEng Twitter account and an updated developer site, Automattic is putting developer resources and communication on a higher priority. Kudish said that this is the result of new initiatives to help developers. “In November 2013 we formed a new team at Automattic under the leadership of Raanan Bar-Cohen,” he said. “This team is focused on third-party integrations with WordPress.com and Jetpack. Part of what we work on are these initiatives to promote our development resources and APIs.”

With WordPress now powering more than 21% of the web, it’s critical that developers have easy access to information on integrating with WordPress.com, which makes up a large chunk of that 21%. Much of the information on the new Developer Site was already available in one form or another, but the documentation is now better designed and easier to navigate. In the future, the team plans to add forums to help developers find answers and interact with one another. For now, the best way to get in touch is via the contact form or Twitter.

One response to “WordPress.com Developer Site Gets a Fresh Look and Updated Documentation”