WordPress 5.0 Beta 3 was released this morning. This beta incorporates all the changes from Gutenberg 4.2 RC1, which was released last week. It fixes a bug with the display of the custom fields meta box and also improves REST API requests.

Gutenberg has undergone a few UI tweaks and introduces a Formatting API for adding new RichText components. The inserter between blocks was updated to provide a more consistent experience that matches the other “add block” buttons. Version 4.2 also adds support for displaying icons in new block categories to better organize groups of blocks. The example pictured in the release post shows the Jetpack icon. The Jetpack team has been working on a number of blocks for existing features and is expected to release those soon. 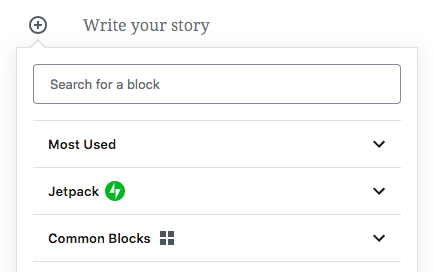 WordPress 5.0 Beta 3 brings in updates from Twenty Nineteen’s GitHub repository, including support for selective refresh widgets in the customizer, support for responsive embeds, and tweaks to improve the experience on mobile devices.

WordPress 5.0 is now two weeks away from its projected release date of November 19. Last week Gary Pendergast announced some updates to the 5.0 release schedule that build in extra time for betas. After pushing out Beta 3 Pendergast said he expects to release Beta 4 later this week. He also offered an explanation for why RC1 is scheduled for release on November 12, allowing for just one week of last-minute testing following RC.

“The block editor has been available for over a year,” Pendergast said. “It’s already had a longer testing period, with 30 times the number of sites using it, than any previous WordPress release. The primary purpose of the beta and release candidate periods is to ensure that it’s been correctly merged into Core.”

Initial feedback on the schedule changes indicate that some user would appreciate a longer RC period, since the code being tested has changed so often.

“The API freeze just happened in version 4.2, so saying the editor has been available for over a year in anywhere near its current state doesn’t make sense for a 7-day RC period on such a major change,” WordPress trainer and developer Brian Hogg said.

“As an example, just in the last version or two the hover-over menu to remove a block has been taken out and tucked away at the top menu (which was available as shown in https://youtu.be/yjqW_IS6Q7w?t=80), with little time for anyone to provide usability feedback on changes like this.”

Those who are creating training materials and videos have been waiting for a bit of a reprieve in Gutenberg development to make sure their materials are accurate and ready for 5.0.

“Knowing it’s an RC means we can assume a level of ‘this is how it will be’ that just isn’t necessarily with pre-RC versions,” Modern Tribe developer George Gecewicz commented on the post. “That relative certainty is useful for testing aggressively, finalizing design/UI stuff, and revealing post-merge bugs.”

Gutenberg 4.1 was supposed to be the “UI freeze” milestone, but that hasn’t happened yet with several changes introduced in 4.2.

The "freeze" in "UI freeze" doesn't mean you can thaw it and change it willy nilly. Some of us rely on such landmarks to do our work.

There should be short window of time before 5.0 is released where training materials can be finalized. However, the Gutenberg team plans to continue on from there with its same pace of development.

“Over the past six months, there has been a release every two weeks,” Pendergast said. “We’ll plan to continue that over the first few WordPress 5.0.x releases, to ensure that bug fixes are available as quickly as possible. How soon should we expect WordPress 5.0.1? Approximately two weeks after WordPress 5.0, unless we see bug reports that indicate a need for a faster release.”

WordPress 5.0 is on schedule for its original release date, but there is still a possibility for the the release to be delayed. Matt Mullenweg, commenting on responses to the accessibility team’s assessment of Gutenberg, said that delaying the release has “definitely been considered” and that it may still happen. His response also indicates that WordPress users can expect the pace of core development to continue along the path Gutenberg has carved.

“Despite some differences that still need be resolved, there’s general consensus that the long-term way to create the best WP experience for all types of users is not something you can tack on with 5-6 weeks at the end, but will be the result of continuing the continuous iteration we’ve had with the 42 public releases of Gutenberg so far,” Mullenweg said. “It means we can get improvements into the hands of users within weeks following a release, not months (or years) as was the old model with WordPress.”