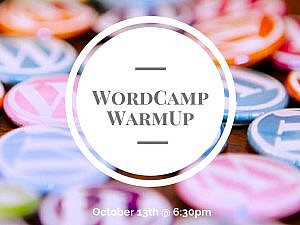 For newcomers, attending WordCamps can be an intimidating experience, especially if you don’t know anyone at the event. A new experimental event called WordCamp Warmup, aims to alleviate the intimidation factor.

WordCamp Warmup is part of WordCamp Ann Arbor that takes place October 14-15 at the University of Michigan. The event is the brainchild of Rebecca Gill, founder of Web Savvy Marketing.

“It came to my head at PressNomics and I thought it would be good for introverts,” Gill said.

“I think it was after someone made a comment about WordPress having a ‘cool group’ and newcomers felt that the cool kids were unapproachable. I was grouped into that cool kids segmentation and I absolutely don’t want to appear unapproachable, so I thought this event would be something we should utilize to fix that issue.

“I started to think I could personally welcome each person who arrived at WordCamp, but then thought this might go one step further. Kind of like a buddy system for newbies.”

“I briefly discussed it with either Cami or Andrea,” Maurer said. “I’m paraphrasing when I say she said it was totally fine and as long as we make sure we have our budget in order for the important stuff, adding additional gatherings/activities like this is not a problem.

“We’re not the first to have additional activities and social gatherings beyond the traditional speaker dinner and after party format. But to my knowledge, we will be the first to put together something for this distinct purpose.”

Meeting new people at WordCamps can be difficult, especially for introverts who are not used to starting the conversation. Maurer knows first-hand that the relationships or lack thereof created during the course of the event can make or break a newcomer’s experience.

“I know from experience, the value derived from attending a WordCamp is strongly correlated with the level of comfort and companionship one feels with the rest of the attendees,” Maurer said.

“Basically, the more people you know and the more comfortable you feel when walking into a session or lunch and when asking questions, the better your overall experience will be.

“My confident expectation is that those who attend this social gathering on Thursday, will have an overall better experience on Friday and Saturday because they will see more familiar faces and feel more welcomed.”

The event is free for WordCamp Ann Arbor attendees and is scheduled to take place on Thursday, October 13th at 6:30pm at Arbor Brewing Company. Appetizers and drinks will be available and space is limited to the first 50 people who reserve a spot.

18 responses to “WordCamp Warmup: An Experimental Event Aimed at Breaking the Ice for New WordCamp Attendees”