Weglot, a multilingual plugin which has been in the WordPress market for a little over a year, has closed €450K in seed funding from SIDE Capital. Co-founder Rémy Berda reports that there are now more than 10,000 websites using Weglot and the company has passed 30K€ in monthly revenue.

Over the past six months Berda and his small team have been working to add improvements based on user feedback. Weglot will now detect a visitor’s language and automatically redirect to serve the translated page. Weglot users can also connect with Textmaster‘s marketplace to order professional translations through their accounts. The support burden has also increased from 10-20 emails per day to more than 80 per day, challenging the small team’s resources.

“Over the past few months, we started to be overworked by the amount of support or the number of features we wanted to add to the product,” Berda said. “We got a bit frustrated not to be able to improve the product as we wanted to through lack of time. So we understood that if we wanted to keep growing at a fast pace, we would need to scale up our two-person company and raising money was the perfect way to do it.”

After making the connection with SIDE Capital at the end of 2016, Weglot decided to partner with them to fund the further expansion if its support team. The team is currently comprised of two founders, one lead developer, one head of support, and one support agent. Approximately 1,500 of Weglot’s 10,000 users are on an active paid plan, but the remaining 85% of free users make up a significant portion of the support load. Berda said they are investing their resources in support, which serves both free and paid users, in order to maintain the same quality.

In tandem with improving the performance of the plugin and its support, Berda said the team is also developing other integrations to test Weglot’s service outside of the WordPress market.

Weglot is growing rapidly in the North American market. Although the Asian market is not represented on the plugin’s user breakdown below, Berda said it has more than doubled in the past two months.

“We have been seeing an accelerating growth in the Americas in the past 6 months,” Berda said. “We went from 5% of our clients to 25% now. Asia is still small but has been quickly growing in the past two months from 3% to 8%.” 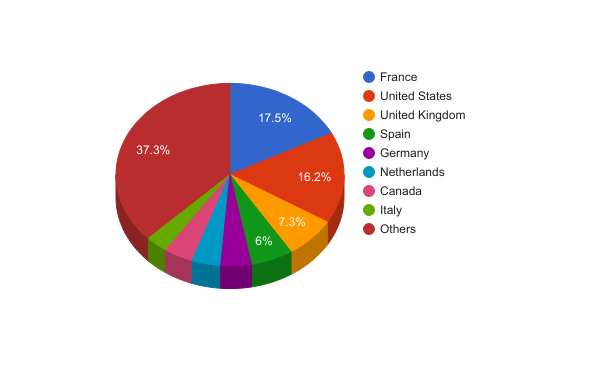 One year after officially launching Weglot, Berda and his team have found that WordPress is a ripe market for entrepreneurs who are ready to move quickly and provide a high level of customer service. His advice to newcomers?

“You’re in the right place,” Berda said. “WordPress is a huge market with real needs, and it is often overlooked by many entrepreneurs. There is an active and strong community with ‘caring’ values. So WordPress is definitely a great place to build a business.” He recommends keeping to a brisk timeline: