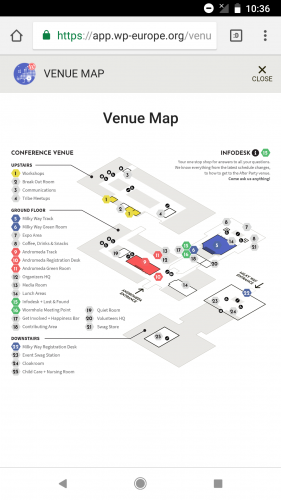 WordCamp Europe’s new PWA (Progressive Web App) was one of the highlights of the 2018 event in Belgrade. It allowed attendees to view the schedule, venue map, create bookmarks for sessions, and provided offline access in case of network failure. Attendees could add the app to their home screens and opt to receive push notifications for important updates about the event.

The first iteration of the PWA was not ready to be scaled for use at other WordCamps across the community, but volunteers from the WCEU organizing team are working towards that goal.  The app was originally built using React on the frontend and was hosted on a node server. It used WordPress for content management on the backend, along with the WordPress PWA plugin and OneSignal Push Notifications. The team working on scaling the app for use at other WordCamps is still debating the technologies they will use moving forward.

Hugh Lashbrooke posted about the app’s progress and invited the community to contribute to WCEU’s PWA repository on GitHub.

“The next stage in the process is for the WCEU Design team to create some designs and wireframes for what the app could look like, posting them for feedback,” Lashbrooke said. “We will keep posting updates here as things progress; for now it would be helpful to gather some input from other WordCamp organizers.”

Lashbrooke said the goal is that each WordCamp site will have its own PWA so the app is unique for each camp. Since it loads in a mobile browser, it doesn’t require additional app installations.

Weston Ruter, one of the collaborators on the PWA for WordPress feature plugin, emphasized in the comments that the PWA should not be separate from the main site and that users need not even know about the app.

“After all, a PWA is just a website,” Ruter said.  “A PWA does not have to be installed to their homescreen to take advantage of PWA capabilities. They just continue go to their WordCamp website as they do normally, except that it also works when they are offline. The interactive schedule is important, but it’s not really PWA territory: rather it’s just a JavaScript component used on a page.”

Ruter encouraged those working on the app to view it as a progressive enhancement on top of the existing WordCamp sites, not an entirely separate application. Ideally it will use the same style and theme used on the main website.

Lashbrooke asked for developers and WordCamp organizers to leave feedback and feature requests in the comments of his post. Requests submitted so far include a “you are here” feature and the capability for users to log in with their WordPress.org account to sync schedule favorites across devices. Not every feature request will make it into the first version, but the team will consult the list for future versions of the project.