Yesterday, Twitter announced that it was rolling out the new profile redesign to all users. If you haven’t updated your Twitter profile, you can click on the “Get it Now” button on the new profiles product page.

Last week we featured Ozh’ Tweet Archiver as an easy way to archive your tweets to WordPress. The 2.0 version of the plugin has been updated to work with Twitter’s OAuth API and 2.0.1 has support for post formats, thanks to a contribution from Chip Bennett. Ozh also updated the Tweet Archive WordPress theme that accompanies the plugin in order to more closely match Twitter’s new profile design. 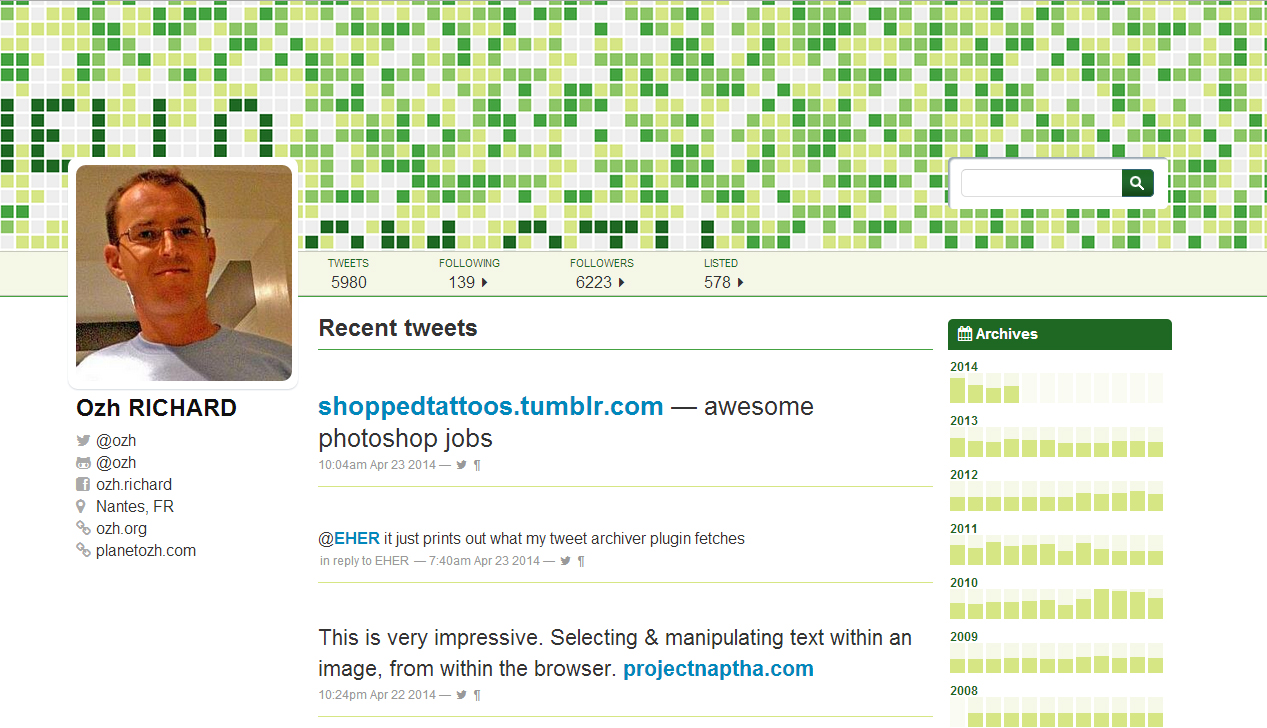 You can view a live demo on Ozh’s tweet archive site. He created the theme for his own use so you’ll need to edit a few files to personalize it. It was designed to work in combination with the plugin, so the top bar displaying total tweets, following, and followers only works with the plugin installed. The theme utilizes Font Awesome icons within the tweet archive and social accounts display. It also has support for a sidebar which you can use to allow easy browsing of archived tweets, stats, hashtags, or anything you wish.

All of the user info in the left column can be customized in the header.php file as well as the avatar. The header image can be changed in style.css. It would be cool if the theme was updated to use WordPress’ custom header feature, but it wasn’t really created for distribution. Ozh has the project open to contribution, however, if anyone is interested in refining the theme.

Tweet Archive includes a search bar within the header, since WordPress’ search feature is much easier to use when looking for specific content within your tweets. Ryan Hellyer, who has his tweets backed up to a subdomain, commented on our previous post, highlighting another merit to hosting your own archive:

Another unexpected benefit, is that I actually get traffic from it. Google seems to preferentially send traffic my way instead of to Twitter itself sometimes.

If you’re getting extra traffic from hosting your own Twitter archive, you may want to make use of Twitter’s new pinned tweet feature. This should be easy to accomplish in your archive with WordPress’ built-in sticky posts and a little bit of CSS to make it a larger entry. That way, when visitors land on your archive, they will see your curated favorites at the top of the list.

If you’re using the Ozh Tweet Archiver plugin to automatically archive your tweets to WordPress and you want a theme that will approximate the new Twitter design, grab the Tweet Archive WordPress theme on Github and customize it to match your Twitter profile.