When WordPress theme shops build typography options into their themes, they almost universally opt for integrating Google Fonts. It’s no wonder, given that Google fonts are free, easy to browse and generally fast-loading.

The Theme Foundry is one of the first to step outside the box to integrate commercial fonts into their themes, via a partnership with Typekit. This is the first case of a theme shop selling a self-hosted WordPress theme that includes Typekit fonts right out of the box.

While other themes may offer support for Typekit, none have included it within the purchase price of the theme until now. Theme Foundry’s Oxford theme is their first product to be bundled with Typekit support. 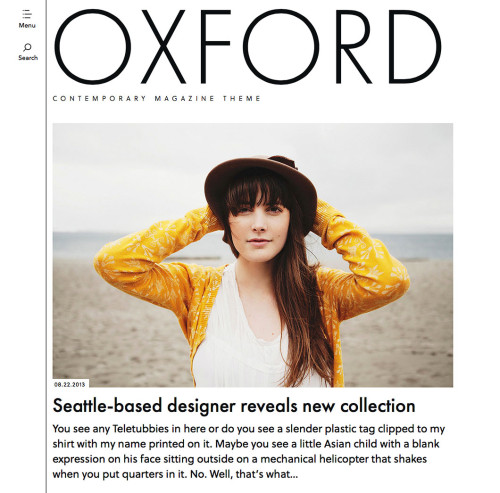 I spoke with Drew Strojny, founder of Theme Foundry, to find out why they sought a partnership with Typekit. He said that it was essentially a matter of providing convenience for the customer. “Asking someone to buy a Typekit subscription to get full value out of their theme isn’t fair,” Strojny said. “So we needed to find a different way.”

Theme Foundry plans to roll out Typekit fonts across their entire collection over the next few weeks. Strojny said that Google Fonts, which they previously used, could no longer meet their design standards. “[pullquote]We pride ourselves on world-class design, and not having access to a library of commercial grade fonts was really holding us back[/pullquote],” he said. “Adobe Typekit is the de facto standard for commercial fonts, and we really wanted to keep pushing ahead with better typography and better design.”

Strojny would not disclose the details of the partnership with Typekit but said that it’s “pretty straightforward and it’s not based on sales or anything like that. Instead, we’re paying for Typekit fonts on behalf of our customers.” This removes the burden of the customer having to maintain his own subscription with Typekit. Instead, Theme Foundry keeps them on the hook with a $39 annual service fee that will allow the customer to continue to use the fonts.

The technical challenges of integrating Typekit are invisible to the consumer. “As a customer, you just authorize using your Theme Foundry account credentials, and your fonts are turned on,” Strojny explained. “We’re using OAuth 2.0 with Memberful and a custom WordPress plugin to handle all the hard stuff.” Theme Foundry customers who fail to renew will fall back to a predefined set of defaults.

Theme Foundry is the first to employ a typography service partnership in order to add value to theme club subscriptions. Whereas a customer may not always opt to renew a theme club membership for the sake of support and updates, the notion of preserving the sophistication of the typography used within the themes may be more compelling.