Building on the success of its Q&A communities, Stack Overflow announced that its new Documentation product is now in beta. For the past eight years, the site has rewarded expert advice by floating high quality answers to the top and allowing users to earn reputation points. This formula has turned out to be more successful than traditional forums where it’s often difficult, if not impossible, to discern the quality of answers provided to questions.

Stack Overflow Documentation is curated by the community and focuses on providing code examples for developers. It offers versioning, collaborative authoring, and voting, which helps surface the best contributions. The documentation segment of the site has a new set of reputation badges and is open to contribution and feedback from anyone.

“Documentation gives a home to a lot of this good content that has been turned away, or very hard to ‘get right’ in the Q&A format. Namely, the canonical, general reference, instructional content,” Stack Overflow developer Kevin Montrose said in the announcement.

“It’s need-driven and self-healing,” Montrose said. “The best, most diligent technical writer out there still can’t beat thousands of actual users trying to learn a function or concept while writing real code. They’ll determine what topics or examples are needed most. And whenever something fails to explain something clearly, they can ask for it to be improved.”

The WordPress Stack Exchange is a thriving community and a WordPress documentation tag is already active on Stack Overflow with 10 topics, 12 topic requests, and 13 proposed. A sampling of topics so far include the Loop, registering custom post types, making network requests with HTTP API, and enqueuing scripts. 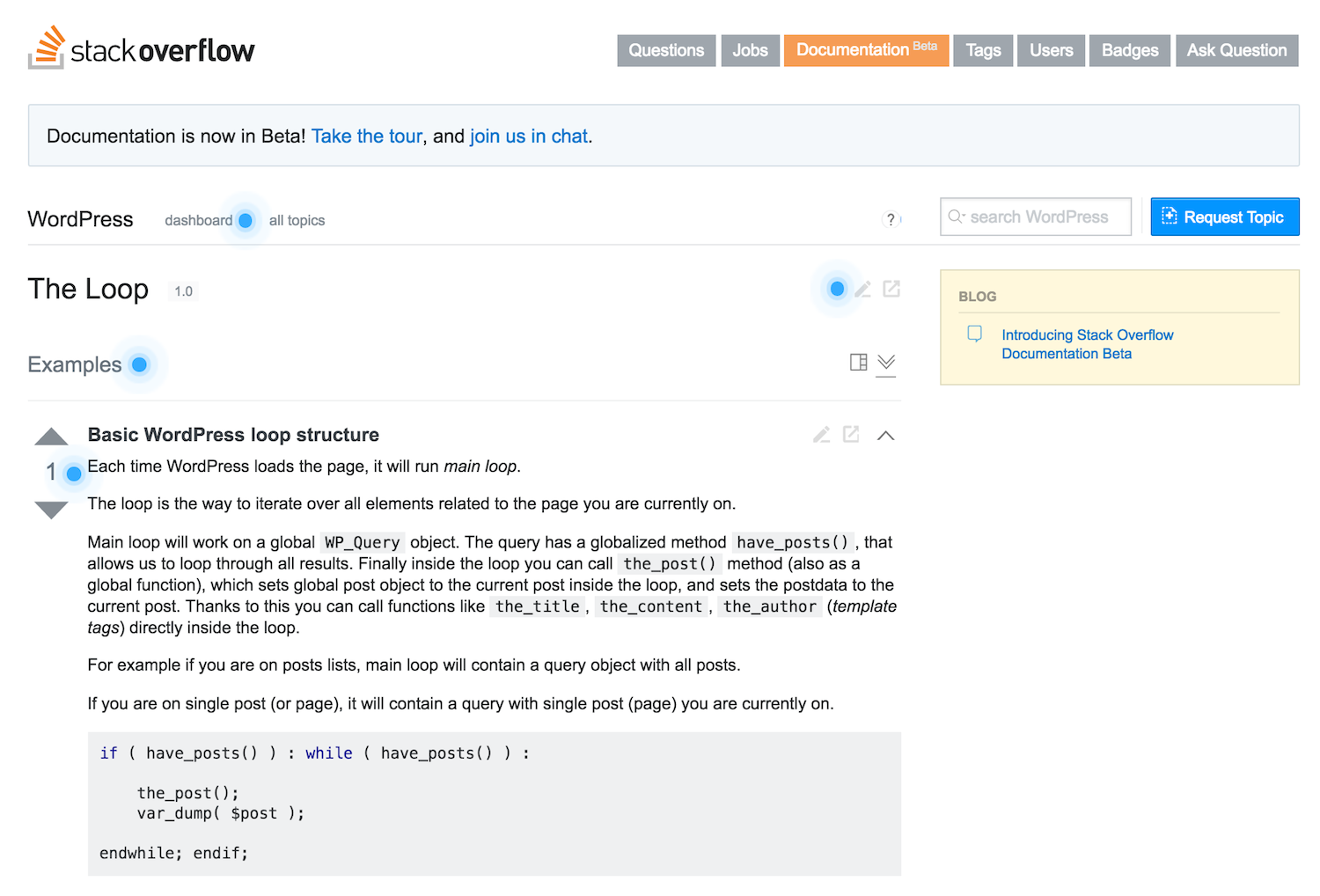 It would take many months, if not years, for the Stack Overflow WordPress Documentation to even come close to the quantity of official documentation on WordPress.org, but the site has the potential to become a valuable alternative resource. The fact that anyone can jump in and contribute using an existing Stack Overflow account makes the barrier to entry very low.

“From my experience with WP docs over years there is a significant issue with people using code snippets over and over again, while they become long outdated,” said Andrey Savchenko, a longtime WordPress Stack Exchange contributor and moderator.

“However, my first impression is that Documentation is considerably harder to use than the Q&A sites,” he said. “It will take some time to see if it will be easier to contribute to than say Codex and Devhub, as well as if it manages to gather a community of WP experts to consistently participate.”

For whatever reason, many developers are not fond of writing documentation, especially when it comes to documenting products that are not their own. Stack Overflow’s Documentation beta will show whether recognition in the form of badges and reputation can attract people who otherwise wouldn’t be inclined to contribute to documentation.

If Stack Overflow can motivate developers to write documentation with the same success as the Q&A sites, the company may potentially explore adding this feature to its Enterprise version, which is built to support private instances of 500 or more users.