Secure the News is a project that was created by the Freedom of the Press Foundation in 2016 to track HTTPS encryption across major news organizations’ websites. It lists the publications and automatically scores them on a scale of 0-100, based on HTTPS implementation according to best practices, as defined by General Services Administration (GSA) Pulse’s current criteria for modern and secure HTTPS deployment. The score is converted to an A-F letter grade. 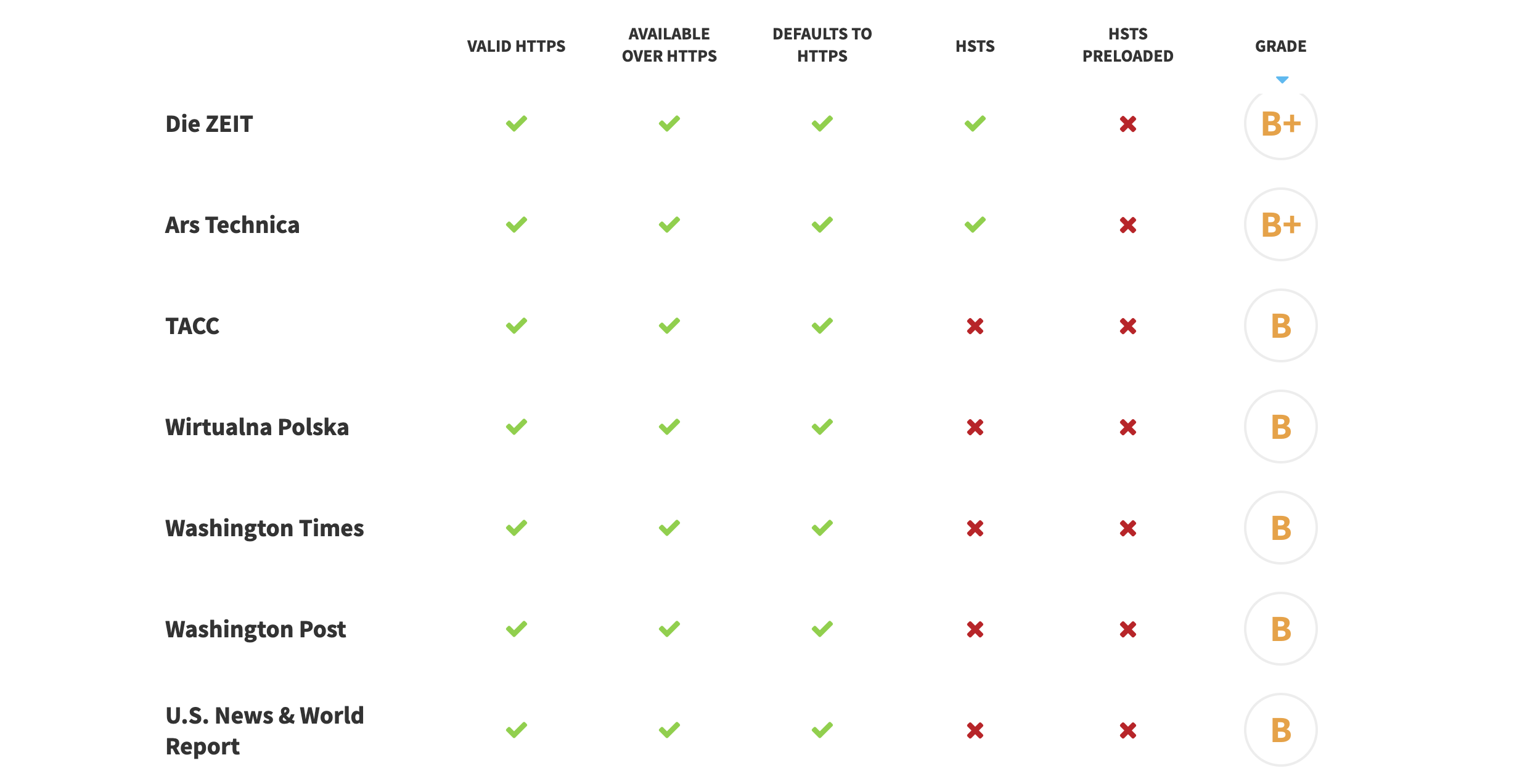 The primary benefits of news organizations adopting HTTPS include reader privacy and website security, but there are also other positive byproducts, such as protecting sources and preventing censorship. Secure the News provides some interesting data in its campaign to encourage more broad HTTPS adoption.

In 2018, after one year of collecting data on HTTPS encryption at more than 130 major world news sites, the project found that HTTPS was available on 2/3 of the sites it monitors (89 of 131), up from 1/3 in 2016. Approximately 60% of news organizations offered HTTPS encryption by default in 2018 and that number is up to 93% today.

Most of the WordPress-powered major news sites, such as Ars Technica, Time and the New York Post, get a B ranking, with the exception of TechCrunch and Quartz, which both scored an A.

The most recent addition to the project is the ability to sort publications by region on the homepage. Publications based in North America and Europe lead the world in having the most secure HTTPS implementations. Asia has a smaller percentage of major news sites with a score of A- or higher. Some smaller regions, such as the Middle East and North Africa, Oceana, and South America, list just a handful of news organizations but they all have a score of B or higher. Secure the News is just getting started with this feature and is accepting feedback on the project’s GitHub account.

In addition to promoting HTTPS adoption, the team behind Secure the News is also considering broadening its coverage to measure other ways that news sites are delivering secure content, such as whether the site has an onion service, is Tor project friendly, or has a confidential tip line. The project also has more news sites to add and a long list of improvements they want to make to the metrics used to rank sites.

The code for Secure the News is open source (licensed under the GNU AGPL) and available on GitHub for anyone who wants to contribute or fork it for use with other site categories where browsing might be sensitive, such as libraries, adult sites, educational institutes, or medical facilities.