Last week Steve Burge and the team at PressShack released PublishPress, a fork of Automattic’s Edit Flow plugin. PressShack is operated by the same team behind OSTraining with a focus on creating publishing plugins for larger organizations.

Edit Flow has more than 10,000 active installs but is updated sporadically and is not very well supported. The PressShack creators saw an opportunity to fork the plugin and sell commercial support and add-ons. PublishPress is now available on WordPress.org with a seamless migration for Edit Flow users.

The first release offers the same features as Edit Flow along with a complete face lift, making interaction with the plugin’s settings more user-friendly. The new tabbed interface puts all the settings on one screen. PressShack has also tweaked the language of the plugin, changing Story Budget” to “Overview”, and simplifying other terms. 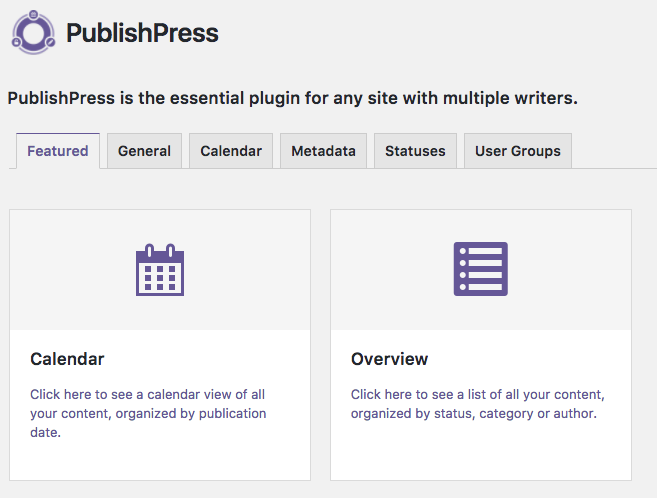 PublishPress introduces a few changes to the calendar, allowing users to click anywhere on a date to add content. It exposes the iCal or Google Calendar feed and uses icons to show post statuses, saving space for other information.

Burge said that PublishPress will be making a fresh start and will not be following and incorporating updates from Edit Flow. The team plans to add a host of new features that improve the publishing workflow to handle multiple users:

Most of these feature are slated for release in mid-2017 and will be offered as commercial add-ons. The team is currently still focused on writing unit tests for the core plugin and adding improvements to it on WordPress.org.

“In Drupal, the workflow features are being demanded and developed by large organizations that use the platform,” Burge said. “As a result, Drupal does have a very big head start in this area. “In Drupal 7, the main workflow module was called Workbench. It was built to meet the needs of large customers such as universities, media outlets, and government agencies who have many different content managers.”

Prior to having editorial workflow tools available, Burge said that Drupal agencies kept losing projects to rivals such as Adobe and OpenText, because they had publishing workflows built for multiple users. Building better publishing tools became a necessity for Drupal agencies that wanted to win projects from large organizations.

Drupal 8 moves many of these editorial workflow improvements into core. Drupal 8.3, which is slated for April 2017, will introduce the ability to create multiple types of content workflows.

“What’s really interesting about the Drupal 8 implementation is that they are thinking beyond just content publishing,” Burge said. “It will soon be possible to put whole sections of your site into a workflow. The demand for these features is still coming from enterprise customers: much of the work is being done by a team of Drupal developers inside Pfizer.”

WordPress core is tailored to a single-author blog workflow, and there are relatively few plugins that modify the default editorial workflow for large teams. CoSchedule is one alternative to Edit Flow and PublishPress that has 10,000 active installs. It takes a SaaS approach and has more of a content marketing slant. Burge said he thinks the WordPress ecosystem’s scarcity of options for extending publishing workflows may be due to current limitations in core.

“It’s possible there are some technical hurdles: for example, WordPress core has fairly limited user permissions,” he said. “It’s also possible that now is the right time for WordPress to start adding these features.”

“WordPress agencies are building more enterprise sites and these demands are popping-up,” Burge said. “Matt just announced the Google Docs integration as a quick way to bring some collaborative features into WordPress. I think we’ll see more and more tools available for teams, rather than single authors.”