Tom McFarlin released his Mayer WordPress theme on GitHub today. The theme was designed with writers, bloggers, and authors in mind and was previously only available to WordPress.com users for $79.

Mayer is unique in that it was created to get users writing immediately, without having a bunch settings pages or additional widgets to configure. Content in the post editor is styled to match the front end, so users don’t need to leave the editor in order to see how it’s going to look. 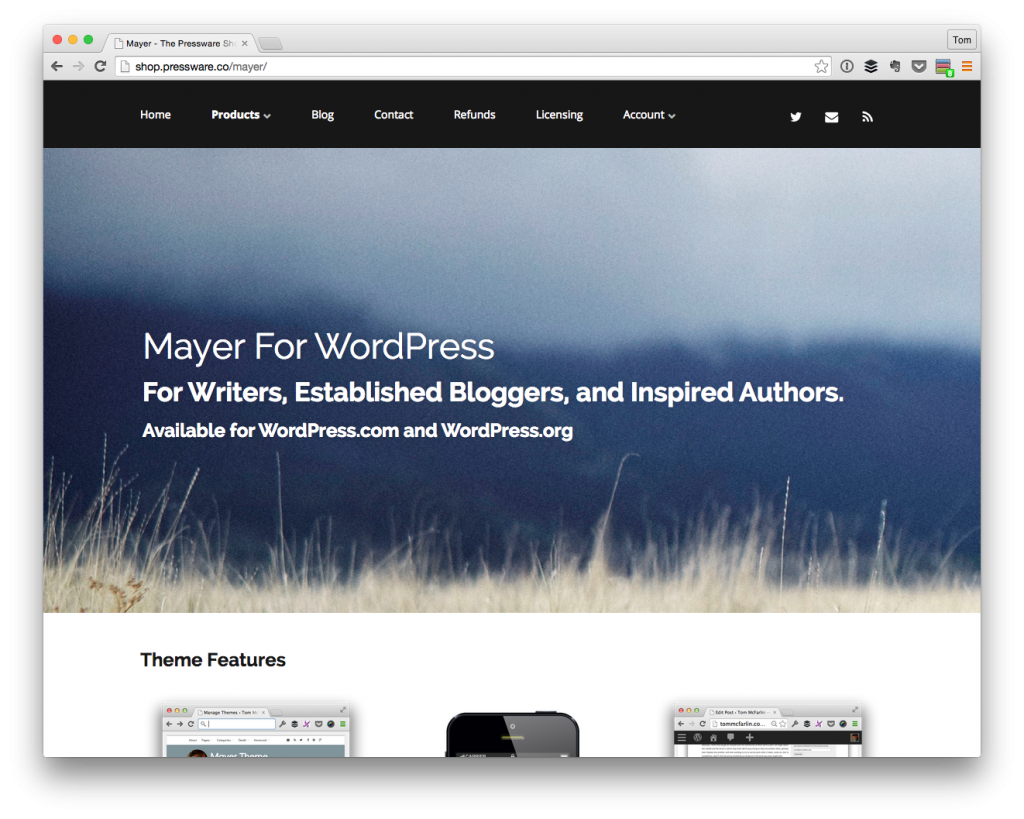 Technically, the theme is already open source in terms of its licensing. However, up until this point, it was only distributed commercially via WordPress.com. McFarlin has written several posts about how he came to the decision to make his products freely available on GitHub. He cites collaboration and accountability as the driving factors in his decision:

“The advantage to this means that all of the work that the team and I have backlogged for this project (and for future projects) is publicly visible if for no other reason than for accountability,” he said. “Ideally though, we’d be able to benefit from the open source community that comes in the form of code reviews, pull requests, or just general conversations to help make the core product better.”

Any theme or plugin author who decides to distribute a product for free will inevitably find the burden of support knocking at the door. It’s important to specify how much support, if any, is included for users who are receiving a product for free.

“If the code itself falls under an open source license, then I’m willing to make the code freely available,” McFarlin said. “This does not mean that I’m willing to support the code base for those who haven’t paid, but that leads into an entirely different discussion.”

McFarlin will continue to sell the Mayer theme through his Pressware shop. The $99/year price tag offers users professional support for a year.

“To be clear, I’m not attempting yet-another-way to monetize or popularize a theme in hopes of making money,” McFarlin said. “The short of it is that the theme will sell given the right marketplace. If someone wants to freely use the theme, that’s fine – why not? After all, it may result in some pull requests or other issues that will improve the core theme.”

Based on his experience navigating user expectations from open source software, McFarlin believes that there is no escaping the issue of support.

“[pullquote]I think that if you’re in the business of WordPress products (versus services), you’re in the support business whether you intend to be or not.[/pullquote] Everything that you release – regardless of where the transaction actually happens – is going to yield support from some of the customers,” he said.

This model is almost entirely the opposite of the larger theme marketplaces, such as Themeforest, where the customer has no option to preview the code or have a developer preview the code before purchasing the product. It’s essentially a blind purchase in hopes that you won’t have to ask for too much support.

McFarlin is banking on the fact that users who need professional support will be willing to pay for it. Theme Hybrid is one notable shop that has pioneered this model for years, offering all of its open source products for free and charging for paid support. WordPress.com does something similar, with many of its free themes mirrored on WordPress.org. Pressware is moving in a similar direction and will be creating a products division to further experiment with the model. McFarlin plans to put more work up on GitHub in the future and will continue to write about his experience.

The vast majority of WordPress theme developers have not experimented with this distribution model. For the most part, theme shops sell their products and free versions, if offered, are only available with a limited set of features. McFarlin hopes to prove that in an open source marketplace, a business can successfully sell support for a product that it’s already giving away for free.