In a post titled Gutenberg, or the Ship of Theseus, Matías Ventura breaks down the vision for how the project will transform WordPress’ content creation experience and the decisions the team has made along the way. Ventura describes how WordPress has become difficult to customize, as online publishing has embraced rich media and web design has evolved in complexity over the years.

“WordPress can build incredible sites, yet the usability and clarity that used to be a driving force for its adoption has been fading away,” Ventura said. “The present reality is that many people struggle using WordPress as a tool for expression.”

Ventura’s words hint at the growing threats from competitors whose interfaces define users’ current expectations for a front-end editing experience. If WordPress is to stay afloat in a sea of competitors, it can no longer continue expanding its capabilities while leaving a disconnect between what users see while editing in the admin versus what is displayed on the frontend.

“WordPress has always been about the user experience, and that needs to continue to evolve under newer demands,” Ventura said. “Gutenberg is an attempt at fundamentally addressing those needs, based on the idea of content blocks. It’s an attempt to improve how users interact with their content in a fundamentally visual way, while at the same time giving developers the tools to create more fulfilling experiences for the people they are helping.”

Ventura elaborated on the foundations of the block approach to content creation and how it will expose more functionality to users in a unified interface, bringing more opportunities to the plugin ecosystem. The post offers some clarity for those who have been wondering about the decision to “make everything a block.” Ventura also anticipates that blocks will become a big part of WordPress theming in the future:

Themes can also provide styles for individual blocks, which can, in aggregation, fundamentally alter the visual appearance of the whole site. You can imagine themes becoming more about the presentation of blocks, while the functional parts can be extracted into blocks (which can potentially work across multiple theme variations). Themes can also provide templates for multiple kind of pages—colophon, products, portfolios, etc., by mixing blocks, setting them up as placeholders, and customizing their appearance.

Ventura also introduced a few new possibilities that Gutenberg could enable. He shared a video showing how granular control over each block can pave the way for a future where WordPress core allows for real-time collaborative editing. This is a feature that has been painfully lacking from the CMS but is nearer on the horizon with Gutenberg in place.

“This same granularity is allowing us to develop a collaborative editing framework where we can lock content being edited by a peer on per block basis, instead of having to lock down the whole post,” Ventura said.

Ventura sees Gutenberg as the path to finally bringing front-end editing to WordPress:

Once Gutenberg is capable of handling all the pieces that visually compose a site—with themes providing styles for all the blocks—we end up with an editor that looks exactly like the front-end. (And at that point, we might just call it front-end editing.) Yet we’d had arrived at it through gradually improving the pieces of our familiar ship, in a way that didn’t cause it to collapse or alienated the people aboard. We want to accomplish this in a way that would allow us to refine and correct as we iterate and experience the reality of what is being built and how it is being used.

He likened the challenge of the Gutenberg project to upgrading the materials on a ship while ensuring that it continues to sail. As there are many passengers who depend on the boat, completely breaking it for the purpose of rebuilding is not an acceptable way forward.

“It is an attempt at improving how users can connect with their site in a visual way, not at removing the flexibility and power that has made WordPress thrive,” Ventura said. “There might be a time when the old ways become obsolete and disappear, absorbed by the richer and clearer interface of blocks, but we are doing as much as possible to make this a process. The old doesn’t have to disappear suddenly, it can be gradually shaped into the new.”

Comments are not enabled on the post, but it has received mostly positive feedback on Twitter. For some, it clarifies the direction of Gutenberg, the purpose of blocks and the possibilities they enable. Others in the community are on board with the concepts behind Gutenberg but are not comfortable with the tentative timeline for its inclusion in core. Ventura’s post does not address many of the more practical concerns the community has about allowing enough time for the WordPress product ecosystem to get ready for Gutenberg.

Matt Mullenweg has confirmed that Gutenberg will ship with WordPress 5.0 whenever Gutenberg is ready and most recently said that delays on selecting the JavaScript framework “will likely delay Gutenberg at least a few weeks, and may push the release into next year.”

“In this point of time, it’s not possible for plugins at all to integrate with Gutenberg,” de Valk said. “How on earth should plugin authors be able to build their integrations within a few months? That’s not possible. At least not without breaking things.” 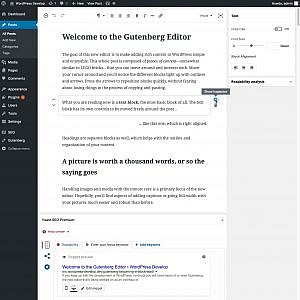 His proposal recommends keeping the idea of blocks and making over the admin for WordPress 5.0 but leaving the meta boxes and toolbar untouched.

“We are very enthusiastic about the idea of blocks, but have strong concerns about some of the technical choices and the speed of the implementation process,” de Valk said. “We are also worried about the lack of priority given to accessibility issues in the project. But most importantly, we are very much concerned about the fact that plugins are not able to integrate with the new editor.”

It’s impossible for developers to have a clear understanding of the right way to extend Gutenberg right now. The JavaScript framework for the plugin has not yet been announced and critical issues regarding how block data should be stored are just now being floated for discussion.

“The Editor/Gutenberg team would like the broader core group to start thinking about and discussing how block data is stored,” Ventura proposed during last week’s core development meeting. “We currently (specially after allowing meta attributes) have a lot of ways to store block data, with different tradeoffs. It’s going to be important to communicate when each is appropriate. This will come through examples and documentation, but generally such knowledge has also spread by core contributors doing talks and blog posts, etc.”

Further collaboration from the broader community of WordPress core contributors should bring the project closer to being able to deliver the documentation developers need in order to follow best practices for extending the new editor. In the meantime, Ventura’s post is a great read for understanding the larger vision behind Gutenberg and where it is headed.

16 responses to “Gutenberg Engineer Matías Ventura Unpacks the Vision for Gutenblocks, Front-End Editing, and the Future of WordPress Themes”