One thing that was continually irksome about Font Awesome icons was the notable absence of a WordPress icon, despite the font having support for Tumblr, Flickr, Github, Instagram, and others. Given that the project is meant to be a comprehensive pictographic language of web-related actions, I was surprised that WordPress, which powers more than 20% of the web, was sadly not represented among the collection.

The good news is that a WordPress icon has finally been added after two years of public demand. Font Awesome 4.1, released this week, added 71 new icons, including one for WordPress, Reddit, CodePen, Drupal, Joomla, Spotify, and others. 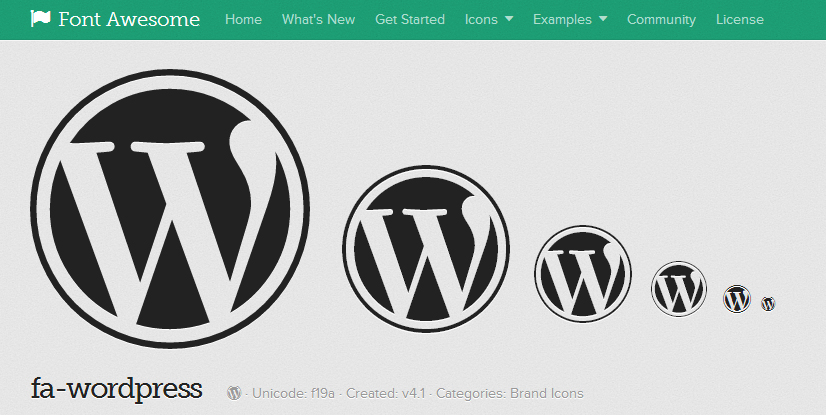 Font Awesome, originally created by Dave Gandy, is an SIL OFL-licensed icon font, with the CSS, LESS, and SASS files under the MIT License. It was originally designed for use with Bootstrap, which helped it to become popular, but was soon widely used outside of Bootstrap-based projects.

Now that a WordPress icon is included, the font will become even more useful for developers writing plugins and themes that make use of the icons. Some WordPress users have even requested WordPress post format icons to be added to a future release. This could potentially be very useful for theme developers but may not gain enough traction.

The WordPress Plugin Directory already contains many pages worth of extensions that use Font Awesome in some shape or form. Plugin authors find the collection to be especially handy because of its wide range of icons and the fact that the icons are retina-ready and infinitely scalable. The font also comes with its own free CDN. The BootstrapCDN for Font Awesome, hosted by MaxCDN, is free for anyone to use. If you’re using a WordPress plugin that uses Font Awesome and you want to take advantage of its 71 newest icons, make sure to prompt the plugin’s developer to update the collection to 4.1.