For the first time in history, more Americans are working for online publications than for traditional print newspapers. In his report on data from the U.S. Bureau of Labor Statistics, NiemanLab’s Joseph Lichterman succinctly summarizes the slow death of the American newspaper:

It’s safe to assume that newspaper jobs will continue to evaporate. Most small and mid-sized metro papers are struggling to find new revenue as print advertising and circulation decline and online advertising fails to make up the difference.

More publications are making the transition from print to digital news, but even large online news outlets like Mashable, BuzzFeed, and the New York Times are still working towards finding a profitable way forward. The internet has destroyed traditional revenue models for both the news and music industries, and we are witnessing a seminal transformation as they are forced into the digital age.

At the same time, people are consuming more news than ever before because of its increased accessibility online. Niche publications are exploding and large online newspapers are some of the most highly trafficked websites. Most publications that haven’t yet done away with their print versions have already become digital-first newsrooms.

Amazon.com founder Jeff Bezos, who acquired the Washington Post in 2013, is looking to capitalize on the influx of newspapers entering the digital era by licensing the Post’s new CMS to other publishers. Arc Publishing was built specifically for newsrooms and shaped by the Post’s editorial staff. It includes features like editorial planning tools, a page builder, analytics, storytelling tools, A/B headline and photo testing, metered paywall support, and user-generated content forms. 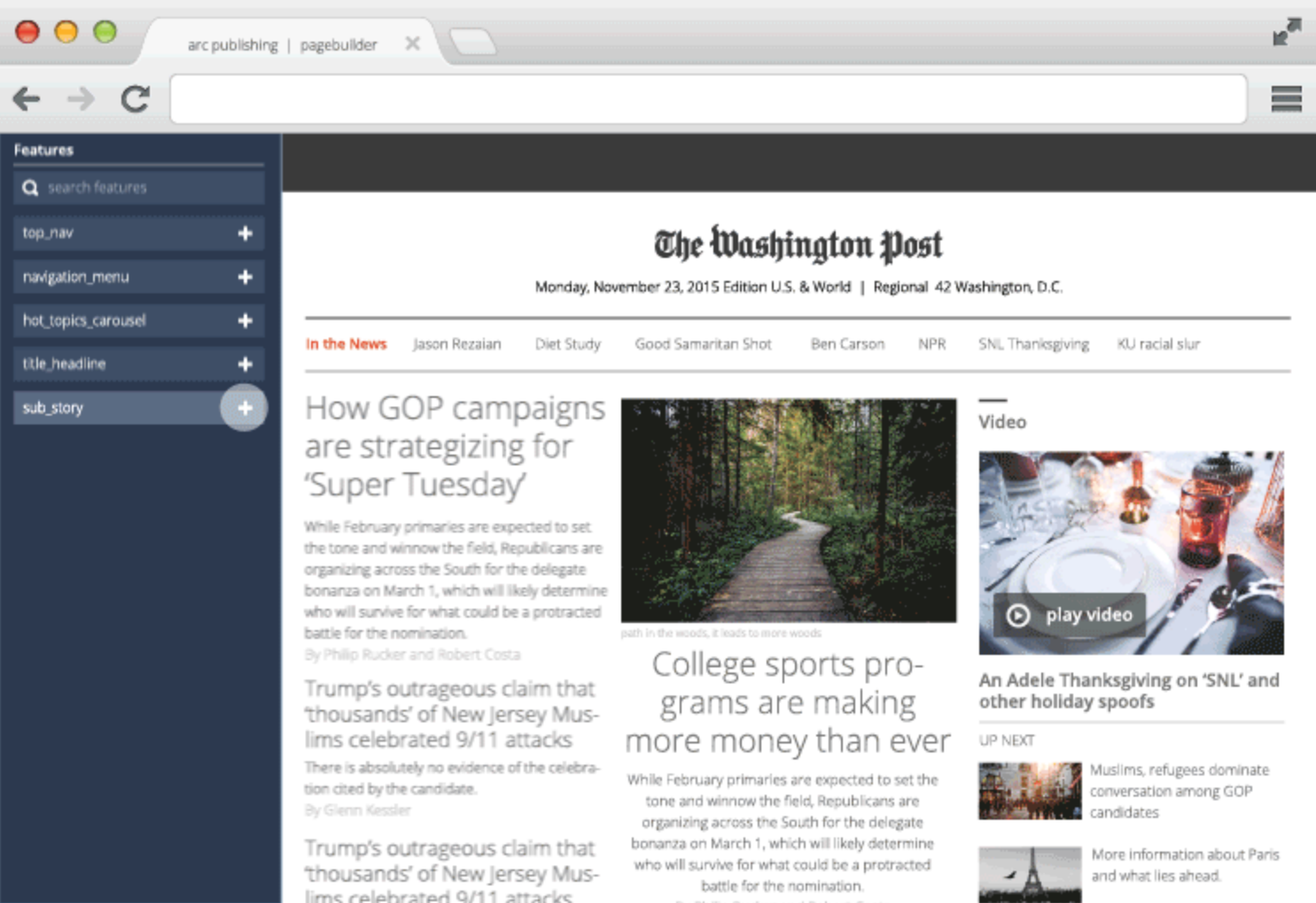 Arc already powers eight university newspapers and a handful of other publications including Argentina’s InfoBae.com, Alaska Dispatch News, and Willamette Week. According to the Wall Street Journal, the CMS will launch on other larger publications like Canada’s Globe and Mail, Tampa Bay Times, and the Sante Fe Reporter later this year.

“For a smaller publisher, the Post can charge around $10,000 a month in licensing fees,” Washington Post CIO Shailesh Prakash told WSJ. “For a larger organization, the figure can rise to $150,000 a month.”

The Post is looking to expand to other publications and has reportedly struck a deal with Tribune Publishing Co. (soon to be known as Tronc Inc.) to be used with publications like the Chicago Tribune and Los Angeles Times. According to WSJ, the Post is seeing 60% to 80% profitability on the CMS and Prakash believes that it could eventually generate $100 million per year in revenue.

Although there is no mention of WordPress on the Arc Publishing website, the suite of tools relies heavily on the WordPress codebase. According to Journalism.co.uk’s interview with Greg Franczyk, the Post’s chief architect, the Post uses WordPress for 70% of the content it produces. Arc powers the publishing process and connects via APIs with WordPress and other platforms.

In the announcement on Willamette Week about the site switching to Arc’s content management system, editor Mark Zusman said that the site uses WordPress in a unique way.

“Arc uses WordPress, but with what we can describe in layman’s terms as a flexible ubertheme that allows publishers to build any page from scratch, moving modules around with ease,” Zusman said.

The Washington Post is branding the entire setup as Arc and hasn’t published any information on the website about the licensing of the tools they have created. The Arc Publishing documentation is still a work in progress, and it’s not clear what aspects of the CMS will be made available for use on other platforms.

Open sourcing the suite of tools they have created to interface with WordPress would be a tremendous contribution to the community and could help more publications transition from print to digital news. Smaller publications that are not ready for hosting on an enterprise-oriented platform could greatly benefit from the ability to use the same tools.

Why WordPress Needs a Magazine/Newsroom Distribution

WordPress and other open source software should have a major advantage when compared to the high cost of hosting a publication with the Post’s licensed platform. Major media and publishing companies are running on WordPress, including the New York Observer, Chicago Sun Times, CNN Newsroom, Metro UK, Quartz, New York Post, Fortune.com, and many others. Many of these are hosted by WordPress.com VIP with prices ranging from $5K – $25K per month.

Hosted platforms, despite their high monthly costs, can be more cost-effective than hiring a team of engineers to support and maintain open source software and the infrastructure required for high levels of traffic. However, this puts the bar fairly high for smaller newspapers entering the digital world.

WordPress is the people’s publishing platform and the most widely-used CMS with 60% market share, but it has become a do-it-all CMS. Tailoring it to be an effective editorial platform requires a long list of plugins and the ability to keep them all compatible and updated. Plugins for running a newspaper are not curated in any meaningful way. The WordPress.com VIP list of plugins is as close to that as one might find but it is difficult to gauge their level of support as their authors and sources are scattered all over the web.

WordPress could benefit from a community-curated distribution tailored for newspapers. No two newspapers are the same, but there are basic publishing needs that most share in common, i.e. editorial tools, image galleries, video support, advertising, author management, etc. Having a set of trusted/recommended plugins makes it easier for editorial teams to depend on open source software without being forced to go to licensed platforms for the sake of stability.

Maintaining a distribution is a time-intensive labor of love, as proven by the case of Open Publish in the Drupal community. Open Publish, a collection of modules for creating online news websites, was one of the first and most popular Drupal distributions. It was created and maintained for four years by Phase2, a Drupal agency, thanks to the support of Thomson Reuters.

The suite of modules made it possible to have a fully open-source powered newsroom up and running fairly quickly. However, as the software became less useful to the agency’s clients, Phase2 slowly phased out its support of the open source project.

“Our business has changed a lot since then, and OpenPublish is not used in the same way we used it for many years,” CTO Frank Febbraro said in response to users asking if the project had died. “All of the innovation we did on OpenPublish was done as part of implementing it for clients. Now, our clients in news and publishing have different needs, and we’re simply using OpenPublish less to serve them.”

Febbraro said that the agency also relied heavily on the community investing in Open Publish to help push it forward but they began to see fewer contributions to the project even after porting it from D6 to D7.

Phase2 eventually discovered that an online news-oriented distribution requires a stronger community of support than one agency can provide. Kevin Reynen commented on the thread to suggest a ‘starter kit approach’ might be a better model for distributions:

I’m a big advocate of using the starter kit approach to distributions over the product approach. Include the modules and some features, but more time is spent on documenting how to configure those than trying to do the configuration for the site builder and on fostering a community around the distribution that can support each other and help keep the distribution moving forward.

This might be an approach that could work for WordPress. If developers who independently (or via an agency) support WordPress-powered newspapers were to collaborate on tools, a digital news starter kit of recommendations could provide a viable open source alternative to proprietary CMS’s and expensive licensed platforms.

At this critical milestone in the transformation of the news industry, where is WordPress in the race to capture the digital news media market? It would be unfortunate if Arc swallowed up newsroom publishing the way Amazon has overtaken online retail and kept all of its tools proprietary in service of its bottom line.

Right now the landscape of news media seems to be moving towards hosted platforms for enterprise customers. WordPress could be more strategically positioned to capture this industry by making it easy to launch a fully open-source powered newsroom for publications of any size. A community-supported online news/magazine distribution could establish WordPress as the go-to CMS for newspapers entering the digital-only era.

14 responses to “Finding WordPress in the Post-Print News Era”