Earlier this week, the folks at BuddyBoss released BuddyPress Global Search, a new plugin that allows users to search through every BuddyPress component. The company’s founder, Michael Eisenwasser, was inspired to give back to the project by creating a string of free plugins that benefit the whole community.

BuddyPress Edit Activity is the team’s latest contribution. This plugin is another handy tool that is likely to be useful for a wide range of social networks. It allows users to edit their activity posts and replies on the front end, similar to the “Edit Post” feature that you see available on Facebook.

Clicking the button allows users to edit their own activity updates and replies. It gives them the opportunity to correct errors or add to their posts, instead of having to completely delete the post and start over.

The plugin’s settings screen lets administrators turn editing on/off for activity posts and replies, and includes the ability to limit the feature to admins only. The panel also has an option to disable editing after a set number of minutes, a feature often available in plugins that extend WordPress comments. Setting it to zero makes comments editable indefinitely. 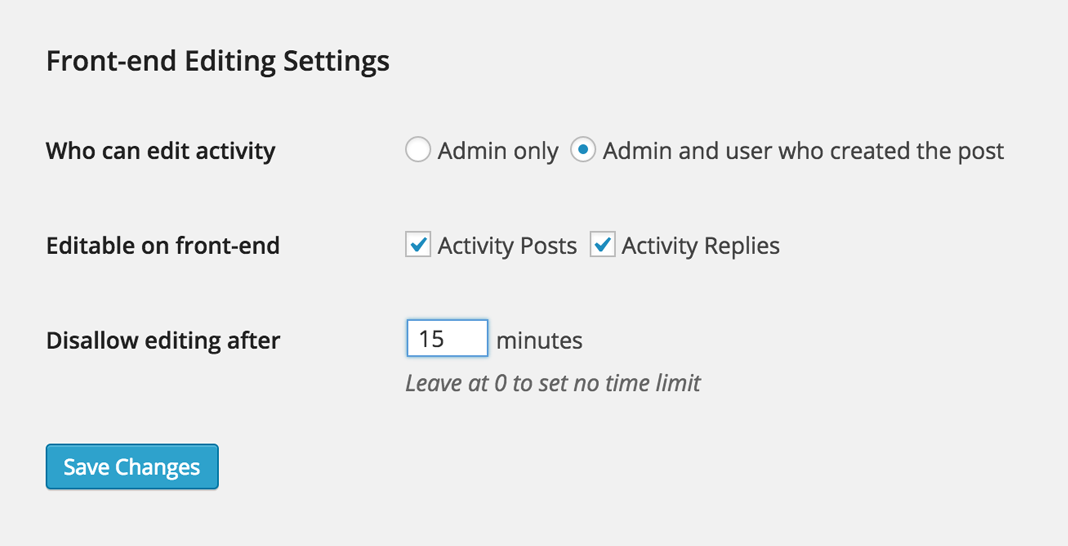 I tested the plugin and found that it works well and fits in like a natural part of BuddyPress. It automatically adapts to your current active theme and doesn’t force any obtrusive styles on the activity stream.

BuddyPress Edit Activity may seem like a small thing but it’s one of those extensions that adds an intuitive feature that greatly improves interaction between users. This is a feature that users have grown to expect based on experience with other social networks.

BuddyBoss is hitting home runs with its most recent plugin releases, both of which are useful for nearly any type of BuddyPress network. The theme shop is strategically positioning itself for becoming more well-known in the market with its indispensable free plugins.

2 responses to “Edit BuddyPress Activity Posts on the Front End”