BuddyPress 2.8 “San Matteo,” was released last week, led by long-time BuddyPress contributor Slava Abakumov. The release was named for San Matteo Panuozzo, an NYC pizza restaurant that specializes in panuozzo, a more portable pizza-sandwich hybrid. Following suit with the previous release, 2.8 focuses on improvements for developers and site builders, the project’s new target audience as of 2016.

As part of an effort to modernize the plugin’s codebase and prepare it for better integration with the BP REST API project, this release boosts the minimum PHP requirement to 5.3. In BuddyPress versions 2.7+, the plugin will display a notice in the dashboard if it detects that the server doesn’t meet the minimum requirements for running 2.8. The change is not likely to affect many BuddyPress sites as only a small sliver (5.7%) of WordPress sites are running on PHP 5.2.

This release also adds a companion stylesheet for Twenty Seventeen. This stylesheet is important for providing a good first impression of BuddyPress for those who are trying try out the plugin with WordPress’ latest default theme. A new BP codex page gives sample code for changing Twenty Seventeen’s default two-column layout to be a full-width layout. 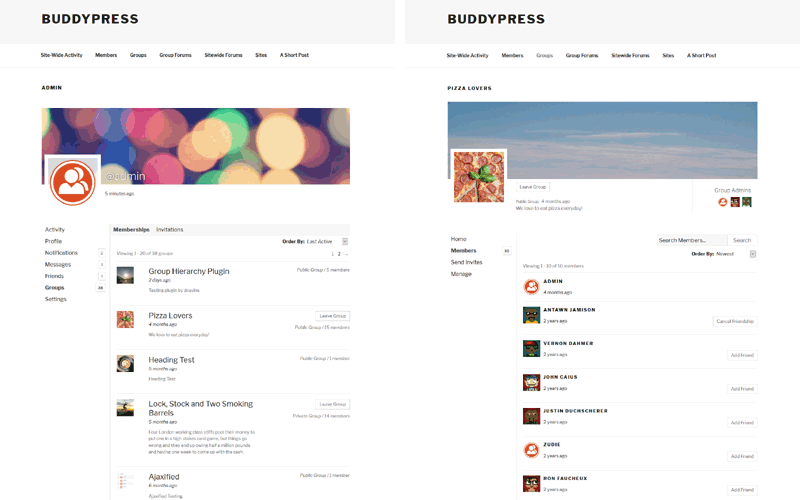 The 2.8 release brings improvements to the “Activate Pending Accounts” screen, making it easier for site managers to confirm or reject new registrants. Clicking on the username of a pending account will now display profile data that the user entered at signup.

Other improvements for developers include the following:

BuddyPress 2.8 was made possible by 44 volunteer contributors. For a full list of all the changes in this release, check out the official 2.8.0 changelog.