Brian Messenlehner demonstrated AppPresser‘s new AppBuddy extension at BuddyCamp Miami with a mobile app created for any WordCamps that are being broadcasted via WP Armchair. His team is releasing the AppBuddy beta today to their customers who have purchased the Agency bundle. 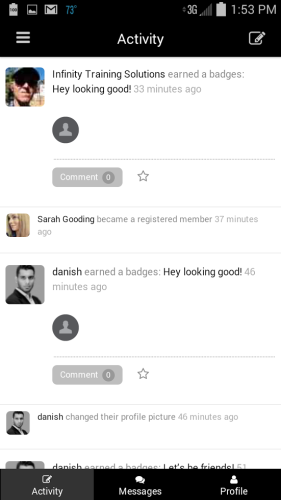 The app is being distributed from wparmchair.com and is in both of the app stores. It allows users to upload and share images and includes an appified profile page, the ability to add friends and join groups, send and receive private messages and post activity updates, just as you would on a standard BuddyPress site.

Currently, the AppBuddy development team is focusing on getting everything to load faster via local storage. Native access to the device’s camera is already baked into the app. Push notifications are on the roadmap to be added within the next few weeks, allowing users to get live updates for BuddyPress-related notices. In the future, the team hopes to allow for access to the device’s contacts so that users can easily invite friends to the network.

WP Tavern is on the ground at BuddyCamp where Messenlehner announced the app. He believes that AppBuddy will open up a new dimension of interaction for BuddyPress communities. “AppBuddy gives anyone the ability to build social apps and duplicate the functionality of their websites,” he said. “It is a powerful tool for people who have big ideas but don’t have the development skills to realize them and don’t want to spend $100,000 developing a custom app.”

Creating native apps for both iOS and Android can easily set you back a hefty sum of cash, given that it requires commissioning work from developers skilled in developing for both platforms. AppBuddy makes it possible for anyone to launch a native app for a BuddyPress social network, at a fraction of the cost. In a way, this extension serves to democratize the creation of social mobile apps through open source software.

A responsive theme is probably the most common way that BuddyPress site owners can offer mobile access, but this still involves the user having to navigate to it in a mobile browser and bookmark the URL. If you want to implement a true app-style mobile experience for your BuddyPress social network, AppBuddy is currently the most cost-effective option. It’s not yet on the market but will be out of beta within a week or two. Download the app via the app stores or from wparmchair.com to check out how AppBuddy is powering social interactions at WordCamps.