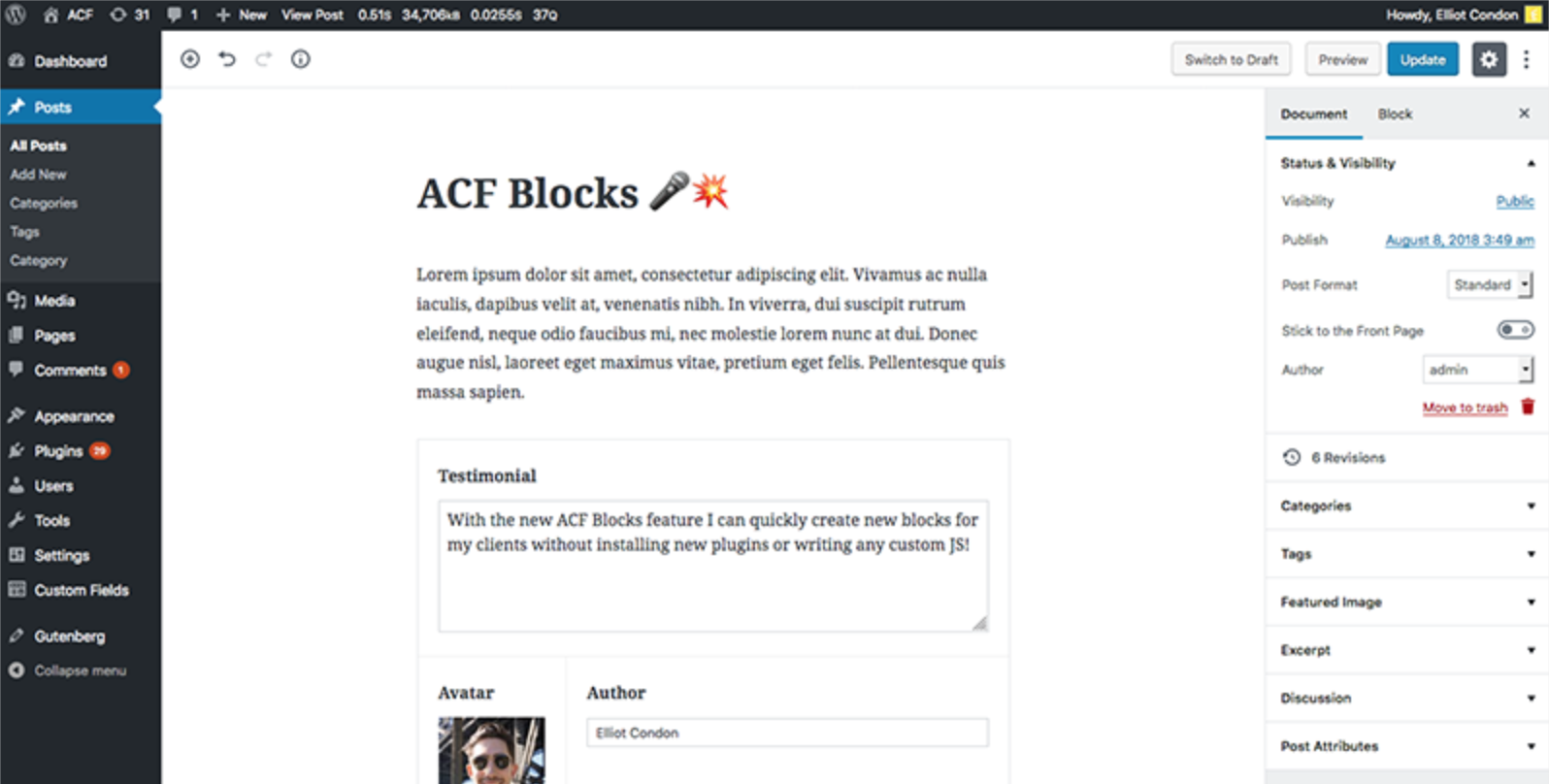 The Advanced Custom Fields (ACF) team published an announcement today, assuring users that Gutenberg compatibility is in the works and will be available in version 5.0 of the free version in September 2018. The plugin, created by Elliot Condon, makes it easy for developers to add custom fields to WordPress edit screens, including posts, users, taxonomy terms, and media.

ACF is widely used with more than a million active installations. Developers have been concerned about whether or not their custom fields would continue to work on their clients’ websites after the new editor makes its debut in WordPress 5.0.

Gutenberg treats legacy metaboxes as second class citizens in the interface, stuffed at the bottom of the new edit screen. Metaboxes should, however, continue to work as expected. The ACF announcement lets developers know what to expect for how their metaboxes will appear inside Gutenberg:

By default, our beloved metaboxes are pushed all the way to the bottom of the screen in an awkward attempt to retain compatibility. This placement feels very much like an afterthought from the Gutenberg developers and creates a disjointed editing experience for those of us (1+ million awesome ACF users) who extend the edit screens with extra fields.

While this setup isn’t ideal, we will continue to work within the system to ensure that ACF is integrated into the Gutenberg UI to the fullest extent possible.

The free version of ACF will introduce Gutenberg compatibility in its version 5 release, which is slated for early September 2018. The compatibility update will only apply to version 5 and later, so the ACF team urges developers to running 4.x to upgrade to 5 as soon as it becomes available. Developers can also elect to upgrade early by turning on ACF’s Early Access feature.

The most surprising news is that ACF is introducing its own “ACF Blocks,” an acf_register_block() function that allows developers to register their own custom blocks without having to learn JavaScript.

One of the big selling points of Gutenberg is the ability for developers to create custom blocks. The challenge is that the process is very JavaScript-intensive and not so friendly to PHP developers. But never fear, because ACF Blocks is here to turn that narrative upside down!

We have been hard at work building a PHP friendly game-changer for you to quickly create new block types using ACF fields to power PHP templates!

ACF Blocks may be an unexpected development for those using the plugin, as the ACF team’s recent tweets have frequently communicated their disappointment with Gutenberg.

Just spent the day working with #gutenberg… 🤕😤😦 Frustrated, annoyed and surprised at how buggy the editing experience is.

The availability of the ACF Blocks function is a strategic move that continues to make ACF indispensable for users who may not have made the time to improve their technical skills with regards to extending Gutenberg.

“Using ACF to make custom blocks was something I thought could happen, but not necessarily would happen,” WordPress developer Roy Sivan said. “They proved me wrong, and its a big deal.”

The news should come as a relief for developers who have used ACF liberally on client sites and feel under the gun with Gutenberg’s proposed time frame for inclusion in core. The ACF team is working to make sure developers’ customizations continue to work as seamlessly as possible when WordPress 5.0 is released.