The first WordCamp in Oklahoma took place this past weekend in Oklahoma City at the Francis Tuttle Technology Center. Although organizers had originally planned for 50 attendees, demand was higher than expected and the event sold more than 100 tickets.

Lynn Dye, lead organizer for WordCamp OKC, has been attending the city’s local meetup group since 2009, which currently averages around 20 attendees. She organized the group for the past four or five years, during which different groups had tossed around the idea of hosting a WordCamp. Dye said they finally had enough momentum in 2016 after the meetup group gained a steady core of people who were excited about bringing a WordCamp to Oklahoma.

“It was interesting that most of the volunteers that we had mainly came from outside our meetup group,” Dye said. “They were just people from around OKC, Tulsa, Lawton, who really wanted to be involved.”

Local Oklahomans, known as “Okies,” made up the vast majority of attendees. “There’s the big iThemes Friends contingency which has brought a lot of out-of-state people, but I would say 75% are local,” Dye said.

When asked what it means for the WordPress community in Oklahoma to finally have its first WordCamp, Dye said, “I think it’s kind of momentous.

“I’ve had several people come up to me and say, ‘We’re so glad we’re having one in our state,’ because there are people from all these little towns around who don’t come to the meetup because it’s so far. They’re very grateful that we had one.”

Designer Cara Bell, one of the event’s organizers, tried to capture the idea of unifying the Oklahoma WordPress community when designing the branding for the event.

“Designing for the event was a lot of fun!” Bell said. “Since this is the only WordCamp in Oklahoma, at least for now, I designed the t-shirt to be inclusive for all Okies. Our planning committee was open to ideas and had some great input, which was very helpful.”

Bell designed the Okie wapuu to hold a 3D version of the Osage Shield, which is featured on the Oklahoma state flag. 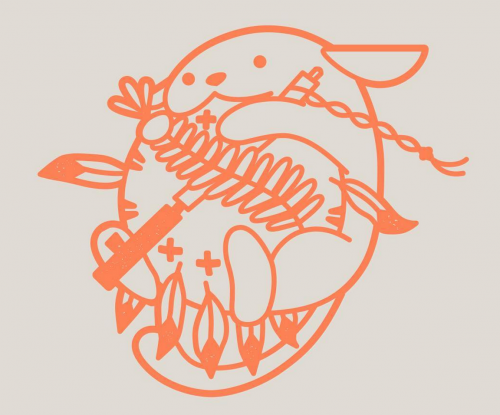 “It’s a symbol of peace, protection, and unity through diversity,” Bell said. “The shield has also become well-loved by Okies and can be found on all kinds of local apparel and home goods. We couldn’t think of a better symbol that includes everyone across the state and brings a little fun to the mascot.”

Bell said that she and her husband Stephen, also a co-organizer on the event, are new to the WordPress community but have been able to get connected to others using the software, thanks to the local meetup group.

“My husband and I started our own branding and web design business a year and a half ago, which is when he first started using WordPress,” Bell said. “Not long after that, he started going to the local WordPress meetup and I would go with him off and on. In just the short time that we’ve been going, we’ve made a lot of great connections in the community and learned a lot about how to make better websites.”

Bell said that they see the WordCamp as a bigger version of the meetup group. Smaller WordCamps like the one held in OKC this weekend have that same intimate atmosphere of a meetup, as you can tell from the photos taken by organizer Morgan Estes. It gave attendees the opportunity to connect in smaller groups, meet the speakers, and really get to know other Oklahoma WordPress users.

“It’s a great way for the local WordPress community to learn more about the technology, while making great connections and lasting friendships,” Bell said. “If people are driving to another state for WordCamp we lose out on the connections. There is a growing tech community here in Oklahoma City, and we’re excited to support that.”

Lynn Dye and the others on her team were first-time WordCamp organizers who were able to fit the volunteer work in around their day jobs and other responsibilities. Together they pulled off a successful event with less than six months of planning.

Dye was assigned a mentor to help her throughout the process and found a lot of structure and support in place for organizers. She said that finding a venue in the right location was the most difficult aspect of planning, but in the end the Francis Tuttle Technology Center was willing to donate the space. Finding sponsorships was the easiest part, and Dye said they were turning down money at the end because they thought they would have too much excess.

“I think it was important for us to have a WordCamp as a way to grow the local community and to connect with the larger community beyond OKC,” organizer Morgan Estes said. “It’s easy to sit in an office downtown working on WordPress and not really think about how it’s made, or what cool ways other people are using it. WordCamp is the perfect place to make those local connections and hopefully grow beyond to global connections.”

The event’s seven organizers have not yet met to decide if they will pursue another WordCamp in Oklahoma next year. Dye said she hopes the success of the event will inspire the local community to strengthen attendance at the meetups, “because that’s where our strength is.”