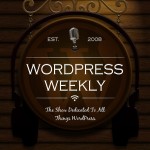 In this episode of WordPress Weekly, Marcus Couch and I are joined by Jeff King, General Manager of hosting at GoDaddy, and Vladimir Prelovac, founder of ManageWP. We discuss a number of topics related to GoDaddy’s recent acquisition of ManageWP including:

We cover a lot of ground in this episode so you may have to listen to it twice. In addition to the topics above, Jeff provides an update on the progress being made to upgrade the technology stack on GoDaddy’s webhosting servers. We closed out the show with Marcus’ plugin picks of the week.

Video Thumbnails, by Sutherland Boswell, works with YouTube, Twitch, Vine, Vimeo, and other video services to create the perfect thumbnail image. Once the image is created, users can save it to their media library and use it as a featured image.

Fundraisers for WooCommerce allows users to create fundraiser style products in WooCommerce with target goals and dates. Useful stats are shown on the product page and customers can choose rewards based on their donation amount.

Control WP Core Emails, by Andrew Norcross, allows users to control the emails sent by the WordPress auto-update process. Users can configure which emails are excluded from being sent.