Though initially impressed with the host’s support when he signed on 18 months ago, Woodward detailed his assessment of its decline over the past eight months, citing poor performance, slow and uninformed support staff, and questionable practices, such as injecting links into customer homepages without their permission. Many of the 200 comments on Woodward’s post are from customers who have experienced a similar decline in service from the host.

This isn’t the first time WP Engine’s hosting has been called into question by its customers. A couple months ago, Audit WP exposed potential SEO and privacy concerns with how the host structures its subdomains for staging. These concerns, though brought to the company’s attention multiple times by other customers, were roundly ignored until publicized by Audit WP’s founder, Jacob King.

Mounting criticism of the company following these reviews has prompted the response penned today by WP Engine founder Jason Cohen, titled: “Growth is Hard.” The statement explains what the company has been doing in response to its slipping customer satisfaction rate.

In January 2014, WP Engine raised $15 million in funding to supplement its rapid expansion. Cohen’s statement today indicates that the first priority for those funds was to hire additional staff:

We closed our Series C financing in January and immediately put it to work in hiring in the Support Team. We’ve increased the team by 50% since then. It’s very hard to hire quickly and yet maintain our standards of both attitude (culture) and aptitude (ability).

Cohen’s post contains a rundown of how difficult it has been for the company to deal with its growth and enumerates what they’ve done to address the growing customer dissatisfaction, much of which has centered around the issue of support.

A host that promises “hassle-free WordPress hosting” and caters to WordPress developers will need to deliver expert WordPress support in order to justify its pricing. In the early days of WP Engine, its customers raved about the top-notch WordPress experts available to assist them. Woodward’s review, however, indicates that this is no longer the case, illustrated by screenshots of WP Engine’s responses to tickets. 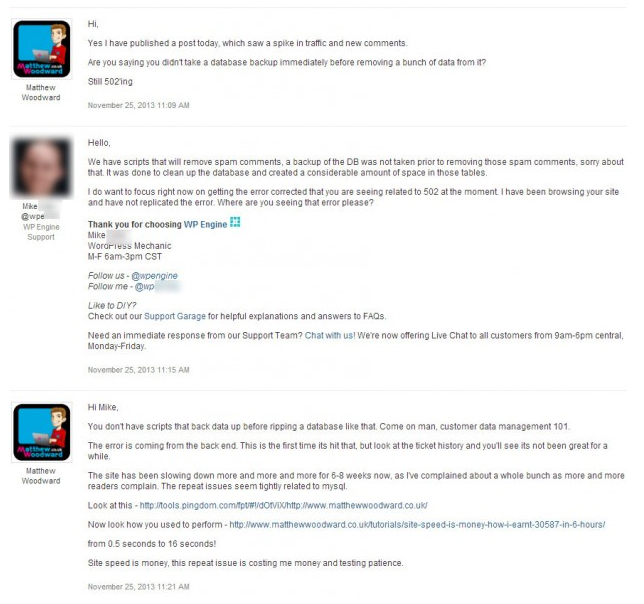 Cohen concludes the article by apologizing and petitioning his customers to have some understanding for their growing pains:

“To anyone that has had a support issue in the past, or is having one now, I would like to say I’m sorry for your experience. But as you can see, we’ve been busy.”

WP Engine seems to have gone into damage control mode, as Woodward’s critical review has been shared liberally on social networks, causing many early fans of the host to voice similar concerns. Woodward suspects the company’s recent funding as a potential cause for the decline in the quality of support:

Now instead of dealing with actual WordPress experts, you’re dealing with customer service staff that have had minor WordPress training and fail to understand the basics…Then you have to consider the $15 million investment by venture capitalist firm North Bridge which pushes the focus towards money and profits rather than passion and innovation.

Is the company growing too fast to maintain its former sterling reputation? The statement and apology issued today isn’t likely to have been motivated by a single bad review. WP Engine is currently fighting an uphill battle in order to regain the consumer confidence it commanded in the early days, while the managed WordPress hosting space is getting more competitive. Customer reviews make it clear that a company’s dedication to innovation means nothing if it cannot deliver the support to back it up.