One of the featured sessions at WordCamp Europe 2017 was Om Malik’s interview with Matt Mullenweg, followed by a 20-minute Q&A from the audience. After showing a preview of the new Gutenberg editor with dynamic blocks replacing widgets, Mullenweg announced that it is now available as a plugin on WordPress.org.

Gutenberg has been in development for six months and is ready for testing, but its developers do not recommend using it on production sites. Anyone interested in the future of WordPress will want to take it for a test drive, as the new editor will revolutionize the way users think about creating and editing content. The demo video at WordCamp Europe also showed Gutenberg working smoothly in a mobile context.

At first glance, it may appear that WordPress is trying to copy its more recent competitors (Medium, Wix, and others) to keep pace, but the 14-year-old software has offered many of these content capabilities for years. Mullenweg explained how the new editor simply unifies the UI into blocks that can be placed anywhere. Gutenberg is set to replace widgets, the HTML UI of shortcodes, and blocks previously offered through the TinyMCE toolbar. 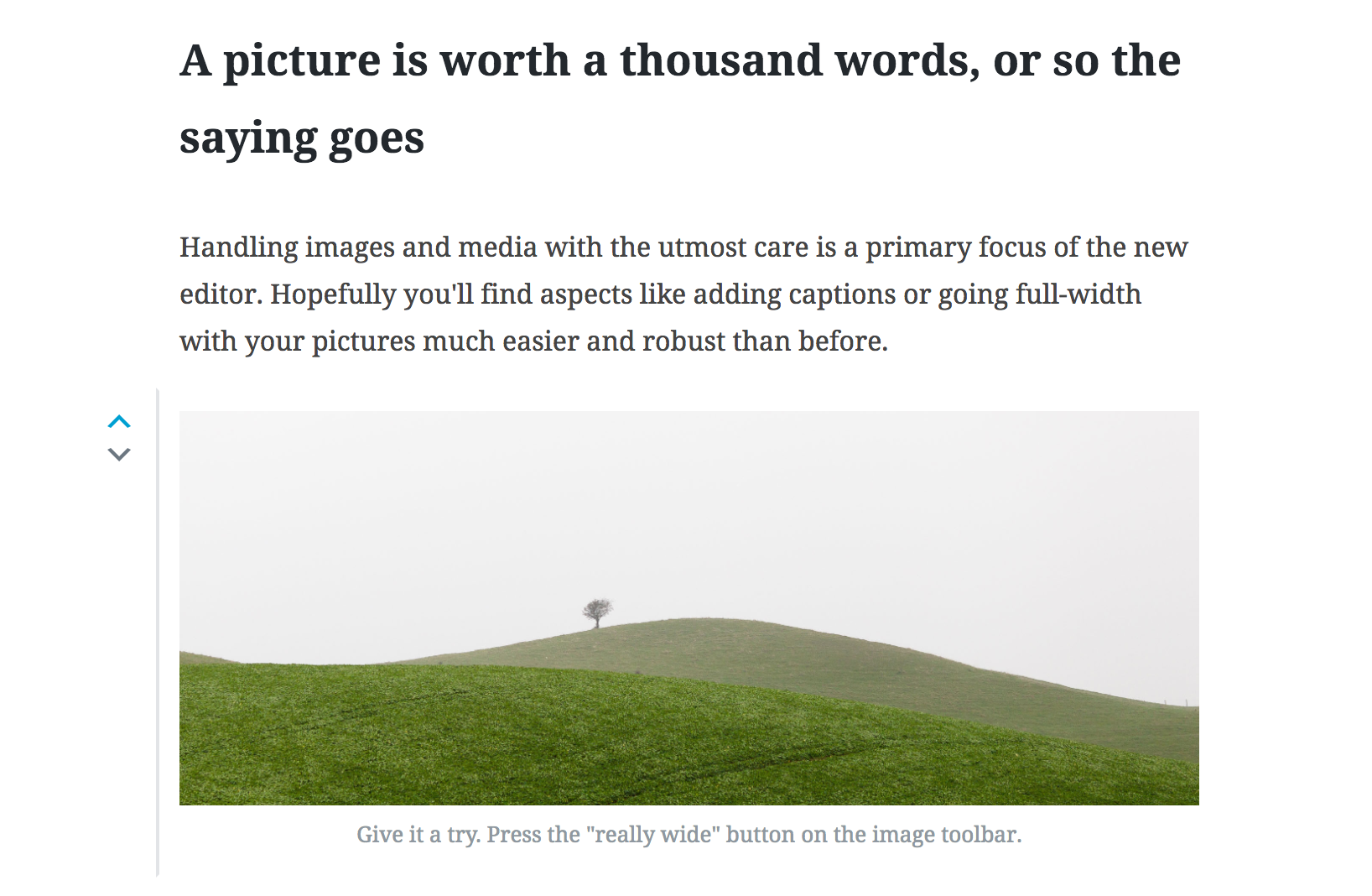 “We’ve taken stabs at this before, if you imagine our previous efforts with post formats – to make it easier to do certain types of media or quote posts or things like that,” Mullenweg said. “That whole concept can now flatten to just being a block. Working all that in, it’s bringing things we’ve been thinking about for a very long time in WordPress.”

If you’ve ever sat down with a new user to introduce them to WordPress, then you probably answered a long list of painful questions regarding the many varied and confusing ways of creating content. Gutenberg has the potential to make WordPress much easier to use.

“Right now WordPress makes you learn a lot of concepts – shortcodes, widgets, the stuff that exists inside TinyMCE as blocks today – and people rightly wonder why they can’t use those things everywhere,” Mullenweg said. “What we’re trying to do is shift it so that you only have to learn about blocks once and once you learn about the image block, that can be in a post, in a sidebar, in a page, in a custom post type, and it will work exactly the same way. Whatever is integrated with it, let’s say a plugin that brings in your Google Photos or your Dropbox, that will now work everywhere, too.”

Mullenweg said his previous attempt at replacing TinyMCE lasted approximately two years and they never ended up shipping it. Getting Gutenberg off the ground at this time allows WordPress to take the best of what competitors in both open source and commercial spaces have been doing, and improve upon it.

“Medium started five or six years ago,” Mullenweg said. “Browser technology, what you can do, has advanced quite a bit. I think this actually allows us to leapfrog past some of the really great visual editors, because we’re able to build on the shoulders of things like Medium, Wix, Squarespace, and others that have come before us.”

The Gutenberg plugin is now active on more than 300 sites and first impressions are rolling in. This is the first time the new block editor has been easily accessible to any user who wants to try it. Gutenberg also offers a somewhat unique testing experience in that it creates its own menu inside WordPress, so users don’t have to choose between the old editor and the new one. Activating Gutenberg doesn’t make it an either/or experience and users can test at their own convenience.

From my initial testing, I found that Gutenberg provides a clean and enjoyable experience. Up until this point many of us couldn’t fully anticipate what Gutenberg would look like, but the interface is very similar to what one might imagine for an improved “distraction-free writing experience.” Gutenberg provides a more minimal UI for both the visual and text editors, although inserting blocks seems to be less functional when using the text editor.

There are still many bugs and rough edges, but this interface appears to be a natural evolution of WordPress’ content editing experience. It feels like WordPress. The editor pulls in many of the elements that have worked well historically and introduces a minimal UI that makes it possible for anyone to build a beautiful, feature-rich post without knowing any HTML. Gutenberg is the most exciting thing to happen to WordPress in a long time.

Matt Cromwell, co-author of GiveWP, also wrote up his first impressions of Gutenberg with high compliments for the new writing experience.

“In recent years we’ve seen Medium become the de facto elegant writing experience,” Cromwell said. “Medium is able to do that though by limiting the formatting and layout options dramatically. Gutenberg has the potential to allow writing to be as elegant as Medium or more so, plus deliver far more flexibility with layouts and content types.”

One area of uncertainty for WordPress developers is how Gutenberg will handle support for plugins and maintain a high level of performance with a large number of custom blocks added.

I'll try again when it has support for plugins. I can't see this landing in core if it doesn't work with plugins.

It *should* store the block data as JSON (or serialized object, IDC) into postmeta, but instead it uses regexp to parse HTML and queries DB.

“I miss a lot of the meta boxes I’m used to seeing on the screen,” Aaron Jorbin said. “Things like Yoast SEO (on some sites) and custom taxonomies are just not shown. If every metabox ever made for WordPress needs to be remade, it sure is going to make developers’ lives a living hell.”

Matt Cromwell also detailed a nightmare scenario of having more custom blocks than the current UI can handle.

“What happens when you have 25 plugins that all want to load 25 custom blocks into that tiny ‘Insert’ dropdown?” Cromwell said. “Will there be a search? Or will it just scroll forever?”

Mullenweg specifically addressed some of these concerns in his Q&A session at WordCamp Europe.

“A lot of people have a lot of things built into the edit screen, so part of the reason we’re putting it out there as a plugin first and also pushing it so hard to get as many people to install it as possible, is so that everyone who has posting and editing screen adjustments can rethink them to be beautiful within this new framework,” Mullenweg said.

Mullenweg anticipates that WordPress will release version 4.9 before merging Gutenberg, because he wants to see it tested on more than 100,000 sites before replacing the edit screen. If all goes well, the new editor could land in WordPress 5.0.

“I think that some things that people did, like TinyMCE toolbar things, aren’t really needed any more,” Mullenweg said. “Stuff that people did in the past with custom post types might be better as blocks. It gives us a real opportunity to reimagine a lot of the user interactions and flows that today we’ve taken for granted on the edit screen for five or six years.”

Check out Mullenweg’s WCEU 2017 interview below to see the live demo of Gutenberg and make sure to take a few minutes to install the plugin to see it in action for yourself.